This is part one of a two part series on the questions facing the Raiders squad going forward. Check back next week for part two.

With only a few weeks left the Canberra Raiders are in the disastrous limbo between being a ‘mathematical chance’ and ‘playing for pride’. Both of these scenarios convey a hopelessness, a meaningless to the last month of the season.

Rather than conveying August to the scrap heap of our collective memory, this last period provides a unique period similar to the end of 2014 and 2015. The Raiders, well out of the finals, have a series of key questions they need to answer. There’s a real opportunity to work out key roster issues that can place them in a position to succeed in 2018.

Is Nic Cotric ready to be full-time fullback?

We touched last week on the coming challenge facing the Raiders on where Nic Cotric’s future lies. We pointed to 2020 as being the critical juncture at which the organisation needs to know whether he’s a long-term fullback. But with Jack Wighton (rightly) ensconced in the position, there was little opportunity to work out if Cotric would fare better. 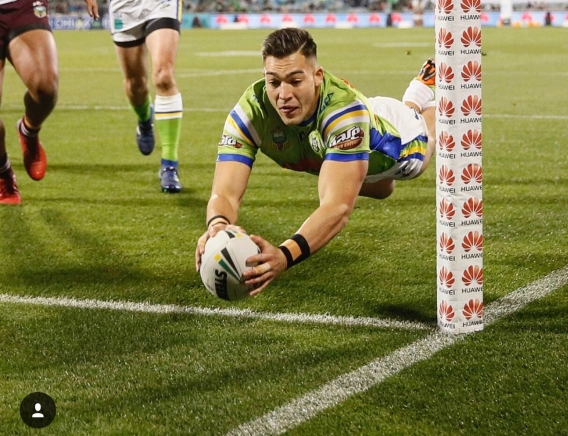 Jack Wighton’s suspension is anything but convenient, but when life gives you lemons, you paint that shit gold. Combined with the nervous and error-ridden play of Brad Abbey, the Green Machine have a chance for a sneak peak at Cotric’s proficiency as a custodian.

So far he’s had limited opportunities with the ball. Here’s hoping the brains-trust finds a way to get the ball in his hands.

Is Sam Williams a long term solution at half?

Blake Austin is going. Ata Hingano is out for the season. Jack Wighton isn’t even in the discussion as yet. The Raiders don’t have anyone else coming. Sam Williams has a chance to lock down this spot, and he knows it.

We’ve highlighted the challenges he faces in this position before. He’s an organising half, and so is Sezer – they both prefer to play first receiver.

Sidebar: there’s a thing where people think Sezer is a ‘five-eighth’ by trade because he wore six at the Titans. Five-eighth is a strange position these days. Most teams play with split halves (think Clearly and Maloney on each side of the ruck). One player may be slightly bigger, or a better ball-runner but they’re both for all intents and purposes ‘halves’.

Some teams still use a ball-dominant half where the person with the six plays mostly at second receiver – think Cronk and Munster, or how Thurston and Morgan used to connect. Sezer and Austin have played this way for a good part of their partnership.

Sezer and Williams would definitely be the former. Advocating for the Raiders to pick up a ‘7’ won’t push Sezer wider of the ruck. It just changes the amount of space Sezer covers, rather than changing how he plays.

Williams’ is a smart footballer and capable of beautiful things when he threatens the line (shock horror) but some days he seems oddly lacking in aggression. He’s not the biggest defender, and can be a magnet for forwards trying to get a momentum into a set. In short he’s not perfect, but there aren’t perfect options available.

Injuries have meant Williams and Sezer have had limited opportunities to work together this year. It would serve the Raiders well to know if the challenges faced by their partnership can be overcome before the 2019 season starts.

If Williams perform well, he’ll start next season as the halves partner to Sezer. If he doesn’t, he’ll remain one of the premier depth options in the competition.

Are the young forwards ready for the big time?

With Shannon Boyd and Junior Paulo departing, Sia Soliola at the back end of his career, and questions still existing over whether Dunamis Lui will extend his stay in Canberra, the Raiders have to find out whether their young forwards can provide the ballast to a forward pack that will be undergoing a change in style next year.

More than just depth, the Raiders need the efficiency of young players succeeding in the forwards. Mobility and agility, particularly in the defensive line, is a critical part of the Green Machine that must be amended.

Success from the young guns will also mitigate the departure of experienced forwards and the addition of untried (in Australia) forwards from England.

There’s a real chance for the Raiders to test the waters with their young forwards this year. Liam Knight and Jack Murchie have already had a taste of first grade, and while neither has been a revelation, nor have they disappointed. Junior representative Emre Guler waits in the wings.

Check back next week when we look at the unanswerable questions.