It’s a strange thought trying to define the importance of a player.

Mal Meninga is one of the greatest players of all time. You know the usual biographical information. The only 4 time Kangaroo tourist. 3 time NSWRL premier. Played in 10 grand finals in 14 years of top grade football (winning 5). Captain of Australia, Queensland and the Canberra Raiders for what felt like my entire childhood (and research reveals was ‘only’ 4, 3, and 6 years). The most games for Australia and the most points for Queensland when he retired. The greatest centre to ever play the game*. The captain and star of the greatest rugby league team ever. The man who brought success to the Raiders, and a soul to Canberra. There was simply nothing in Rugby League he didn’t achieve.

Shit I didn’t even mention his success coaching Queensland, or the fact that as coach of the Raiders his sides won 53 per cent of their games, which would be ahead of most current NRL coaches. 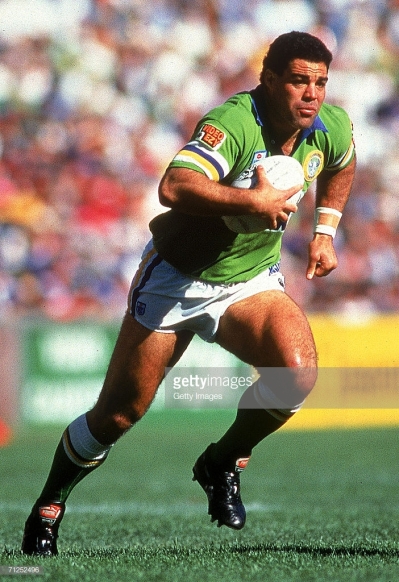 But even all that seems to underestimate the man.

Meninga was something more. He was thirty years before his time, a million kilograms of power and pace, capable of bowling over defenders through the line and outpacing them to score. He was a yardage back before they existed. So much of what that era’s Raiders did was predicated on his ability to break tackles (and the line) at will. Every time he ran the ball it felt like to took four or five defenders to get him down. He was a the rolling momentum of a good set personified. He dominated the game from the moment he started playing professionally until the last day of his career. There was no let up.

He was awe-inspiring. He stood so far apart from his contemporaries that he didn’t seem human, more like a demi-god transported to earth to show the people of Canberra, Queensland and Australia that all things were possible. 2 broken arms? Don’t worry. Premierships from 4th? Yeah let’s do that. Back to back? No probs. Taking a battered a broken side on a 9 game winning-streak just to make the decider? Pulling an almost embarrassing series loss to England out of the fire? When things were down, we looked to him to fix them, and he mostly did.

Growing up in late 80s Canberra all of the Raiders were my heroes. Clyde, Daley, Stuart, Coyne, Chicka, Boxhead, I loved them all. I loved Gary Belcher because I wanted to be like him, and thought I could. I spent countless hours in my backyard emulating his jinking run against my brother. I never pretended to be Mal. It felt like sacrilege. It felt pointless. In Meninga I saw impossibility personified. How could one emulate he who was not imitable?

If you took Mal Meninga from 1989 and put him in 2018 he would still shine. That’s rare. Most people are of their time, succeeding in the context of the sport and the time in which they excelled. Meninga’s ability, his leadership, his unique combination of power and pace, are so intrinsic to Rugby League that he would have been a great, even today.

Last night the Rugby League community gathered to have their own attempt at defining Meninga’s legacy.

*scientific fact will not argue

One thought on “Mal Meninga: Immortal”