Recently, the worst kept secret in rugby league was announced – long-time Canberra Raiders star Terry Campese was released by the club. This information was met with some supportive tweeting from Raiders fans, an article in The Canberra Times and basically silence from the rest of the rugby league community. A former NSW and Australian representative effectively retired without so much of a peep from the wider sports media. 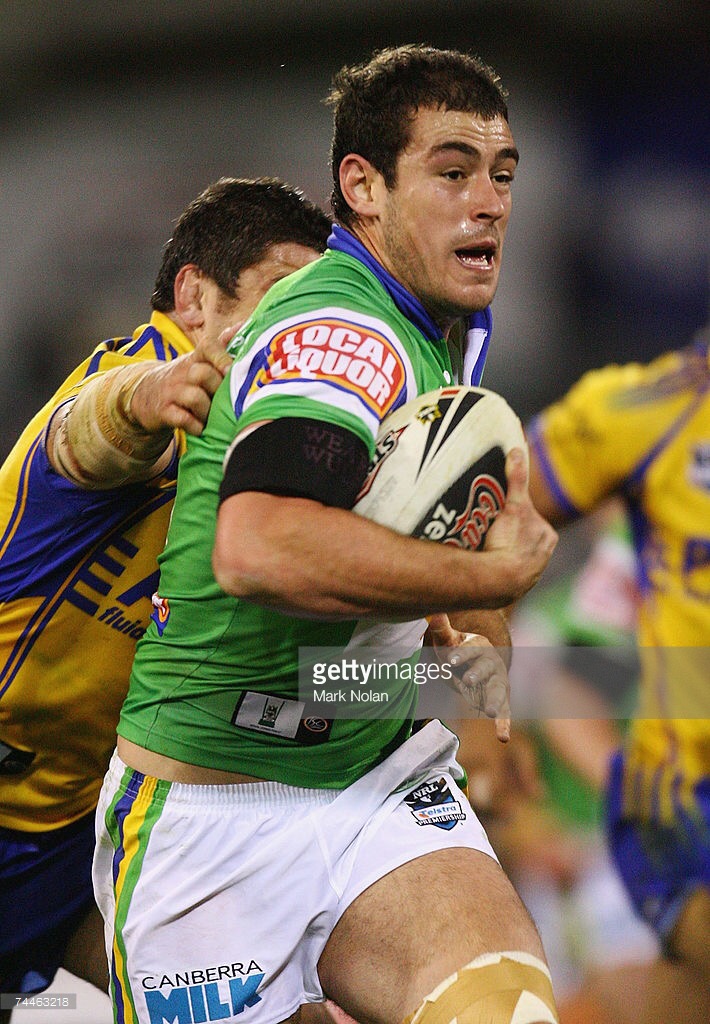 Shouldn’t this have mattered more? Is this the usual anti-Canberra Sydney bias displayed by much Rugby League commentary? Or is it more substantial than that? How should we evaluate him historically?

Over Campese’s eleven years in the NRL he only played 139 NRL games – less than sixty per cent of the available games. In 2005 and 2006 he was (probably rightly) considered inferior to an ‘end of career’ Jason Smith. In 2007 and most of 2008 he  struggled to unseat the ‘never really had a career’ Michael Dobson . It wasn’t until some way into 2008 that he became a regular in the Raiders starting side.

But it was the manner in which he cemented his spot as a regular that will forever be burnt in the mind of every true Raiders fan.

After being elevated to the starting 13 three games into 2008, Campese had been solid if unspectacular; the secondary option to the star that was Todd Carney. Then disaster struck. Carney had another ‘incident’ and was sacked. The Raiders had won four of their past six games and were making a run for the finals. But that run was about to end without Carney.

It’s hard for non-Raiders fans to understand just how low that moment was. In Carney we had lost the very player that had been held up to us as the hope, the future of the side. The person that would bring back the glory days. Suddenly he was gone, and so were the Raiders finals’ hopes. It was all falling apart.

When suddenly it didn’t.

In front of only 8700 of the most loyal Raiders fans (and yes I was there), the Raiders started slowly against the Titans before erupting into an unrelenting wave of attack, scoring 46 and keeping the hopes of the postseason alive. Campese was in everything, directing the attack and organising the side into a slick and organised attacking unit that scored from anywhere on the ground.

But most of all Campese ran the ball. His ability to threaten the line meant that he always attracted defenders, creating space for the people outside him.

Thanks to what can only be considered an astounding purple patch, it seemed like this single-handedly unleashed the potential of the Raiders backline, turning what had been a promising and inconsistent outfit into a point scoring phenomenon over the last seven games of the season. The team averaged 38 points a game over those rounds, dropping 74 on Penrith, 52 against the Bulldogs, 38 against Newcastle in addition to the 46 against the Titans. That the Raiders lost in the first week of the finals seemed irrelevant; they had stumbled on the star to follow in the steps of Daley, Stuart, Meninga, Clyde and Belcher. Campese’s performance earnt him a call up to the 2008 Australian Kangaroos World Cup squad and saw him nominated for five-eighth of the year in the Dally M awards.

The Raiders never quite got going in the 2009 season, although Campese continued to develop. He played for NSW in the first State of Origin and established himself as the Raiders leader and best player.

2010 would be the second act of Campese’s career. A Campese full of running would drive the Raiders to eight wins in the last nine rounds of the season. And unlike the 2008 season, where they only beat teams outside the playoffs, the Raiders emerged into a real premiership contender, averaging nearly 30 points a game and defeating eventual premiers St George and fellow finalist Penrith along the way. In the finals the Raiders accounted for Penrith away, and then faced the prospect of playing the West Tigers for an opportunity to play in the preliminary final.

It was the first time that Raiders fans could actually consider that they had a real shot to make a grand final. Teams since the Stuart/Daley days had always lacked the offensive ability to make an impact in the finals. But here was Campese unleashing Dugan, Croker, Monaghan a backline that reminded everyone of Meninga, Nadruku, Nagas and Mullins.

In the final, Campo played fantastically, willing a team that seemed overawed by the occasion. With the Raiders still in touch, Campese threatened the line again, only for his body to not hold up in response. He injured himself in an attacking raid that resulted in a try that brought the Raiders to within a try. But as Campo was wheeled off on a stretcher, every one of those 26000 supporters new that things wouldn’t be the same without Campo.

Sidebar: Co-editor observation: A lot of media outlets/historical records focus more on Jarrod Croker’s painfully close miss on the conversion, but every single raiders fan in that stadium and everyone watching at home knew that the instant that Campo’s knee gave way that the 2010 campaign had come to a halt. Remember that scene in the Simpsons where Bart shows Lisa a recording of her breaking Ralph Wiggum’s heart, freeze framing it right at the most devastating point? Raiders fans are Ralph Wiggum, and Campo’s ill fated knee is most definitely Lisa.

Turns out things weren’t the same for Campo.

After that, Campese never played at full strength again. Unable to return the stability to his legs that had allowed him to run the ball with such speed and strength, he never reached the heights of 2008-2010. He returned briefly in the 2011 season only to injure himself again and miss practically the entire season. In 2012 and 2013 he began each season with promise only to suffer tragic injuries that would end his season and career. In 2014 a man ran around in Terry Campese’s number, but he didn’t run the ball. Ever. His physical limitations turned him not only into a shell of himself in attack, but also a liability in defence, unintentionally creating a permanent hole on the inside of Jarrod Croker.

And so maybe it’s right that his release is met with little fanfare. Ultimately Campese had career that started and end quietly.

But for me anyway, in the middle, his ball-running ran the Raiders to the highest point they have been since the glory days. And Raiders and rugby league fans will remember him for that.