The Canberra Raiders 32-28 victory of the Canterbury Bulldogs wasn’t a good victory, but it sure was exciting. It cannot come close to providing catharsis for every heart-wrenching loss they have suffered this year, but it’s better than another loss. For close to 70 minutes the Canberra Raiders were inept and unwilling. They were dominated by a physical defence. Their vulnerable edge defence was mercilessly targeted and taken advantage of. They played with seemingly no urgency until the game was almost lost. But with their season on the line, the Raiders, and most notably Blake Austin, stepped up and stole the game in a stunning comeback for the ages. 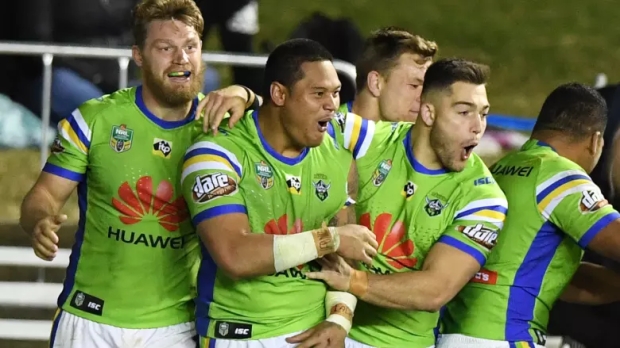 This victory was thrilling. The Raiders know as well as any team the scale of the mountain they had to climb. The questions that have been asked of the side, and Blake Austin in particular since their capitulation last week would be enough to drive a man to drink. It was clear this effected their effort in the first 70 minutes of the game, and that they still managed to overcome these issues should make any Canberra fan proud

But the end result should not obscure what came before it. The Green Machine’s performance was as depressing for the first 65 minutes as it was exhilarating for the last 15. The story should have been how the forwards were systematically dismantled. A polite way to describe them would be ‘flat’. They were so physically dominated in the ruck that even Shannon Boyd found it hard to earn a quick play the ball.

Only Sia Soliola (13 carries for 132m) and Siliva Havili (13 for 118m) made metres early in the game (although Junior Paulo (9 for 97m) and Jo Tapine would have a more profound impact later). The inability to get a roll on made Josh Hodgson’s day much harder, and he had to delve into his bag of tricks to engender any threat. He ran the ball more than he has in recent weeks – at times it seemed the only way the Raiders could bend the Bulldogs middle.

These middle men were also dominated when the Raiders didn’t have the ball. Canterbury routinely found 60 plus metres on their sets, and even scored a try when Marshall-King simply ran straight up the middle of a sleepy Raiders defence.

It wasn’t better on the edges. On the Raiders’ left, the Dogs found it easy going attacking Sam Williams’ small frame. Elliot Whitehead tried to cover for Williams, and ended up compounding the problem by giving away multiple penalties in the ruck. It was the problem we highlighted earlier in the week. Williams is a willing defender, but his size makes him a target.

After taking the metres against the left, the Bulldogs scored three tries against the Raiders’ right. The first came when Rhyse Martin simply ran through a lazy arm tackle from Tapine. He was not alone in blame though. Similar to Anthony Milford’s match-winning try in Brisbane, the half (on this occasion Aidan Sezer) failed to take responsibility for the ball on his inside shoulder. This lack of support made it easy for the ball-runner to go through and score.

The last came when, in the midst of what can only be described as “Leilua being Leilua”, BJ jammed in far too early and created an overlap that neither Sezer nor Oldfield was able to overcome.

In the meantime the Dogs scored another from a well placed kick, and with some penalty goals the lead seemed insurmountable when they trailed by 14 points as late as the 74th minute.

The Raiders had only managed to stay in touch because of the poor edge defence of the Bulldogs, which fell apart with only the slightest of pressure.

First Sam Williams put Jarrod Croker into space where he simply ran past Dogs centre. Kerrod Holland (remember that name) before finding Williams backing up for the try. Then Sezer threw Croker a similar ball, but being closer to the line the captain decided to waltz past Holland and take a try for himself. Then early in the second half, the Raiders scored again when Croker took the blind from dummy half, attracting two defenders and Holland was left one-on-one with Nic Cotric, which no man can win.

It was a hint for what was to come in the frantic final minutes.

Blake Austin’s injection is rightly pointed to as the catalyst that saw the Raiders roll over the Bulldogs. Austin didn’t play a lone hand. To a man the Raiders lifted at the back end of this game. The urgency of the forwards increased. Hodgson relished the space that gave him. Sezer looked sharper and decisive directing traffic to the edges. The backs ran with purpose – Croker in particular continuing what had been a banner day for him. Austin was the beneficiary of this good work, but also lit the spark.

Austin initially came on for Williams and effectively played five-eighth, until Brad Abbey’s injury meant he shifted to more of a fullback role, running support lines wider of the ruck. To be honest his position was not that important, but the circumstance was. He was not relied on to create with his ball play – of his eight possessions he threw only three passes, one of which was dropped by Whitehead. He wasn’t required to kick the ball and he barely had to defend. All he did was run at the weak edges of the Bulldogs defence. It was the perfect situation for him.

Given the Raiders had already scored three tries pretty much doing that it shouldn’t have seemed like such a revelation. Poor Kerrod Holland would again be taken advantage of, in a scene reminiscent of how Austin himself was abused by Anthony Milford against Brisbane..

Austin’s running was important to all of the Raiders’ tries that hauled in their 14 point deficit. He first scored himself when he close to the line he stepped past Josh Jackson, who was he only person on the ground who wasn’t expecting Austin to step inside him.

Moments later Tapine scored running a beautiful, strong line off a great pass from Sezer. Tapine got through because Austin attracted the inside defenders with an inside run. This play that had been set up in the 54th minute by a sharp work by Brad Abbey, Sezer and Tapine. A simple outside-in set play, Abbey ran off the inside shoulder of Tapine. On that occasion Abbey had received the ball from Tapine. Later the backrower ran it himself, but the threat of the inside man attracted enough defenders to allow Tapine through. The Raiders had laid the foundation earlier, and finally reaped the benefits.

The final try begin with Austin filling in as the ‘fullback’ role as the extra runner line outside Sezer on a sweep movement. Austin once more ran past Kerrod Holland, and set up the field position that saw BJ Leilua crash over from close to the line a few plays later.

One might be tempted to suggest that this brief but brilliant performance suggests that the Raiders should reconsider the decision to let Austin go. I do not agree with this. Austin was amazing in this game, but it was set up perfectly for him. As mentioned earlier, he didn’t have to create, he didn’t have to tackle, he didn’t have to kick. All he had to do was run the ball at a tired defence that had already shown itself incapable of handling anything approaching quick on its edges. Austin’s strengths were highlighted this week, just as his weaknesses were so obvious last week.

Perhaps his best position is as a utility, taking advantage of tired defenders with his excellent running game. The fact that he shifted from five-eighth to fullback with ease lends weight to this case. But if Raiders’ fans are hoping for a renaissance this season based on this performance from Austin I would recommend tempering expectations.

This was an amazing comeback and one can’t help but be proud of what the side achieved. After so many questions about their ability to finish games they showed they have the fortitude to stick tough in the most tiring circumstances.

Despite the excitement of victory, I’d be wary of drawing too much from this game. The Raiders did not deserve to win. They showed they’ve learnt little of the lessons they need to find a way to the finals. They scored a victory, but it was one that is unrepeatable. The Bulldogs are not a good football side. There is no other team that will be surprised by an Austin side-step again this season. It’s unlikely that we will overhaul a 14 deficit in five minutes of any game, let alone the last five. There are plenty who will exploit our still fragile edge defence, or manhandle our middle forwards. The solution to these problems remains there, and I remain unconvinced we will implement it effectively.

But this escape gives the Raiders another chance to show they can reach their potential. Only time will tell if this minor miracle was the start of something more, or just another notable moment in a bizarre season.