“Potter has it, he can’t break clear. IT’S TAKEN BY BREEEN…it’s a….

That is how Mike Williamson called Barry Breen’s decisive score in the 1966 Grand Final, most possibly VFL/AFL football’s most famous behind. Excited, yet a little incredulous that St Kilda were within touching distance of football’s ultimate prize. 50 years ago this weekend, it remains just as unbelievable.

Formed in 1873, St Kilda had been the League’s loveable losers from the get go. A foundation member of the VFL in 1897, their first win came only after suffering 48 losses. Their second and third wins almost as difficult, 27 losses between wins one and two and a further 23 between wins two and three.

By the time the club had appointed 27-year old, recently retired utility Allan Jeans as senior coach for the 1961 season, the club had only contested six finals series, in its history, and had not seen September action for 22 years. The no nonsense policeman from Finley was about to change all that.

In his first season in charge he led the Saints back into September, the season ending in a First Semi Final defeat to eventual Grand Finalists Footscray. After tasting September defeat, St Kilda went about adding to their promising list that already boasted the likes of 1959 Brownlow Medallist Verdun Howell, the man destined to win the 1967 Brownlow Ross Smith, Allan Morrow, Ian Synman and Rodger Head.

In the next two seasons, they landed two of their biggest ever fish on expeditions to Tasmania. In 1962 the club was joyous at enticing champion centre half forward Darrell Baldock away from Latrobe in northern Tasmania. ‘The Doc’ had previously signed with Melbourne and South Melbourne without venturing across Bass Straight. Despite being short for the position, Baldock was to become one of the Leagues greats, a strong mark and true kick, he was magical at ground level often leaving opponents bewildered with his ball handling.

The following season, without the fan-fare that surrounded ‘The Doc’s’ arrival, they welcomed Ian Stewart to the club.

Despite the low-key arrival, Stewart was to leave an equally large footprint on the club and the League as his more heralded fellow Tasmanian.

A totally fearless competitor, he had outstanding balance and was deadly accurate by foot.

Another finals appearance in 1963 was evidence that the club was heading in the right direction, but a few extra touches were still required. In 1965 the club recruited two key protagonists in the drama of 1966. 20-year old Kevin ‘Cowboy’ Neale a big, bustling full-forward from South Warrnambool and 17-year old Barry Breen, a lean but promising centre half forward from Mentone came on-board, unaware of the role they were to play in ending the League’s longest premiership drought.

St Kilda dominated the 1965 season, losing only four games on their way to the club’s first ever minor premiership. A one-point win over Collingwood, a margin that would separate the teams a year later, in the Second Semi Final meant the team would play in the club’s second ever Grand Final. They met Essendon to decide the 1965 Premiership and, despite their dominant season, were never really in the contest. The John Coleman coached Bombers were too strong on the day, winning the Flag with a dominant 35-point victory.

Stung, but galvanised, the Saints were determined to go one better in 1966 and made a cracking start to the season, winning their first eight matches. However, in an unbelievably tight season, despite entering the last round in second place, only victory would assure them a spot in the finals.

This lead to an agonising decision at the selection table, medical staff advised that captain Darrell Baldock was unfit to play. However, with the importance of the game a factor, coach Allan Jeans named his star as 19th man. In the days before interchange, 19th and 20th men sometimes didn’t even take the field, the coach was adamant the club’s key man would only be used if absolutely necessary.

Narrow leaders at three-quarter time, Jeans deemed it necessary and turned to his captain. ‘The Doc’ didn’t disappoint, a goal early settling the team as they held on for a 10-point win and second position. The double chance won in this match proving vital as they found themselves on the wrong side of the scoreboard in a thrilling Second Semi Final clash with Collingwood. They swept aside their 1965 nemesis Essendon to qualify for their second successive Grand Final and their date with destiny.

Knee injuries and suspensions were the story of Grand Final week. Two players would ultimately miss their place as a result. Ruckman Carl Ditterich’s six-week suspension late in the season would now cost him a spot on the game’s grandest stage, and a season ending knee injury would do the same for 24-year old winger Ross Oakley. It was a particularly bitter pill for Oakley, who later become AFL CEO, suffering the devastating blow in the Second Semi Final two years in a row and would miss his second decider as a result.

With due deference to both players, the club had a bigger fear during the week, would Darrell Baldock be fit to play? The knee injury that should have kept him out of the Round 18 clash was still causing the champion considerable grief and he appeared touch and go for the Grand Final. He suffered a set-back during the team’s last training session, causing Coach Jeans to call an abrupt halt to training to try and keep the sight of his hobbled star from the assembled press. The ruse worked, no one was the wiser but they now had a nervous wait to see how ‘The Doc’ recovered.

It was a blustery MCG that awaited St Kilda and Collingwood as they met to decide the VFL Premiership. The Saints getting the best of the early conditions with Baldock and Neale kicking early majors. Collingwood slowly worked their way into the match and when Gary Wallis was able to steer his kick past a desperate Brian Sierakowski on the goal line at the 22nd minute scores were level again.

Sierakowski, in his efforts to thwart Wallis’ shot, collided with Goal Umpire Stevens who then delivered one of the more melodramatic performances in Grand Final history. After being collected by Sierakowski, Stevens totters in place before collapsing to his knees ala Charlie Sheen in Platoon. As medical staff rush from all corners to the fallen ump, Stevens regains his feet and staggers in semi-circle to his position between the goals before again falling to his knees. ‘Bravely’ he brushes aside the offered medical attention, he finds his feet to perform an exaggerated goal signal and flag wave to confirm Wallis’ goal. If you’ve never seen it or have and want to laugh again, check out Stevens’ remarkable effort here.

From here the Grand Final becomes a mighty arm-wrestle, with the two teams almost going goal for goal throughout. A 13-point lead is the largest either side holds as the lead changes hands constantly, St Kilda by 4 points at quarter-time, Collingwood by 1 at the half and the Saints with their noses in front by 4 points again at the last break. 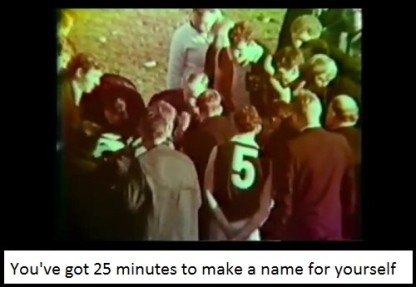 As 101,655 fans regained their breath and prepared themselves for the last quarter, both teams took their final instructions before recommencing hostilities. Jeans famously urging his players at the break “You’ve got 25 minutes to make a name for yourself like you never have before”.

After 18 minutes the gap had been closed to a single point when Neale marked strongly in the goal square. The burly spearhead kicked truly, his fifth goal, giving St Kilda a 7-point space as time on neared. The minor premiers would not lie down and a goal from Max Pitt and a behind to captain Des Tuddenham saw the scores levelled once more.

At the 25th minute mark a running shot for the lead from Collingwood’s Wayne Richardson travels out of bounds on the full and the prospect of a draw loomed large. The Saints continued to attack and in the 28th minute, Ted Potter’s attempted handpass clearance is intercepted by Barry Breen who then hurriedly and unconvincingly wrote his name into folklore with his match winning behind.

It was mayhem in the Channel 7 commentary box, Mike Williamson called the wobbly punt kick then tried to inform viewers of the time passed in the quarter “They have been playing … if my hand can stop shaking I can see my watch,” and “I just put the lighted end of the cigarette into my mouth.” If it was mayhem for those watching one can only imagine the pressure on the combatants on the pitch.

Knowing time was running down Tuddenham kicked long with hope into forward 50. St Kilda fullback Bob Murray intercepted and as if directed by Ted Whitten’s television commentary cry of “hit the boundary line” he headed for the wing.

As he did so in the time keepers box, St Kilda time keeper Fred Farrell was on his feet counting down “five, four, three, two, one” then pressed the button for the siren to signal the end of the match. In case no one heard the siren, Farrell then proceeded to press it again and again in delight.

After 93 years of pain and torment, St Kilda were finally Premiers! Grown men and women cried openly and unapologetically as they realised that this was the day they never expected to see. It is even said that the clubs most famous supporter Ian ‘Molly’ Meldrum fainted in the stands, unable to cope with the gripping dying stages of the match.

Immediately after the match, most players from both sides exchanged jumpers as was the tradition of the time. As a result, Darrell Baldock received the Premiership Cup in Des Tudenham’s Collingwood jumper. It also meant when the players set off for the first premiership victory lap the majority of players were decked out in the Magpies’ Black and White. 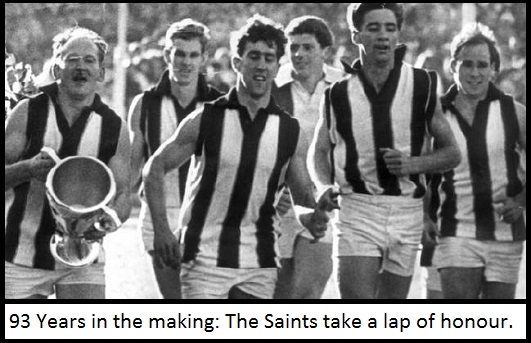 In the dressing room after the games the players began to celebrate the spoils of victory. ‘The Doc’ was asked for his thoughts. “It’s thrilling enough to win a premiership, but it is doubly thrilling seeing it’s St Kilda’s first pennant,” Baldock said. “I’m very proud and honoured to lead the Saints to their first premiership.”

He then, on a chair with a glass of champagne in hand, led his team in paying tribute to their mentor, “I’d like to pay a tribute to Allan Jeans,” Baldock said. “He has done a wonderful job as coach. Most of us went out there to win it for him.”

In response, an emotional Jeans told his team ”Wherever you boys ever go, or whatever happens to you, I’ll always remember you for this wonderful moment you gave me.”

50 years later and all St Kilda fans still remember Jeans, his special group and the extraordinary afternoon upon which they claimed the games ultimate prize.

The day the Saints went marching in.