The oft referred to, but equally impossible to define, ‘spirit of cricket’ was invoked to criticise the fielding team in a pair of controverisal decisions in the past fortnight. Outrage and self-righteousness filled the cricketing world as not one, but two batsmen were ruled out obstructing the field.

While opinion was divided when the Brisbane Heat’s Alex Ross was ruled to have deliberately altered his running line to prevent him being run out, his captain Brendan McCullum left the world in doubt in regards to his opinion on the matter.

“Personally I don’t think it was the right decision,” the former Blackcaps skipper said post match. “We are not righteous in our stance on the spirit of the game but every now and then you get the chance to stand up for the spirit of cricket and tonight George (Bailey, Hobart Captain) and the Hurricanes missed that opportunity.”

The incident that saw South Africa’s Jiveshan Pilay dismissed, on the other hand, saw almost universal criticism of the fielding team. Former Proteas keeper Mark Boucher one of many to draw parallels with a controversial moment that the West Indies were involved in at the last U/19 Tournament.

While none of those Boucher mentioned joined the fray, another Test Captain suggested it was something he did often. 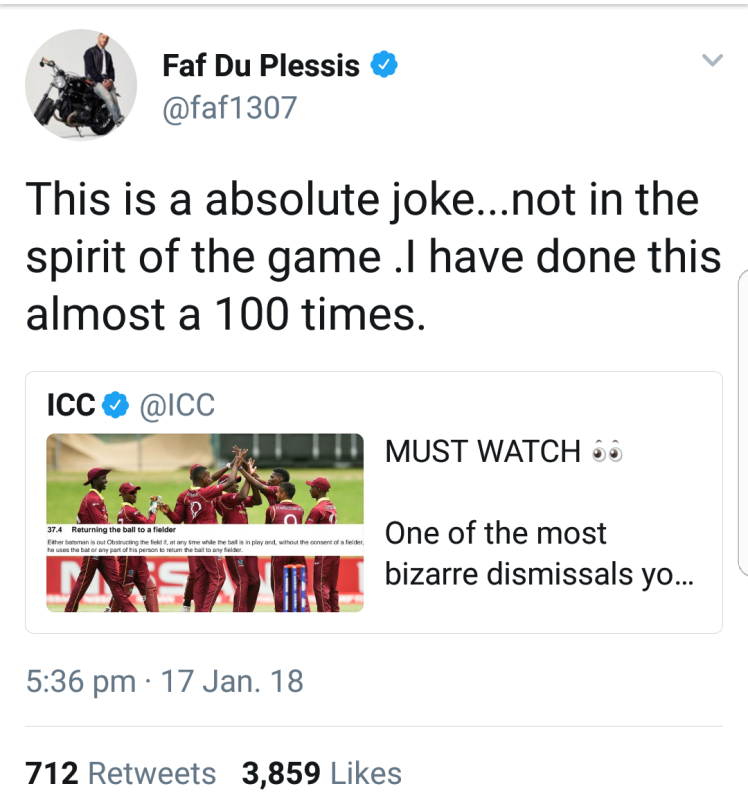 Du Plessis seemingly of the view that because people do it all the time without sanction that the West Indies team were at fault in asking the umpires to enforce the laws of the game. It was a view shared by most pundits who joined the debate but it wasn’t the only point of view. In fact Mitchell Johnson went so far as to offer the Proteas skipper some advice while sharing his opposite point of view. 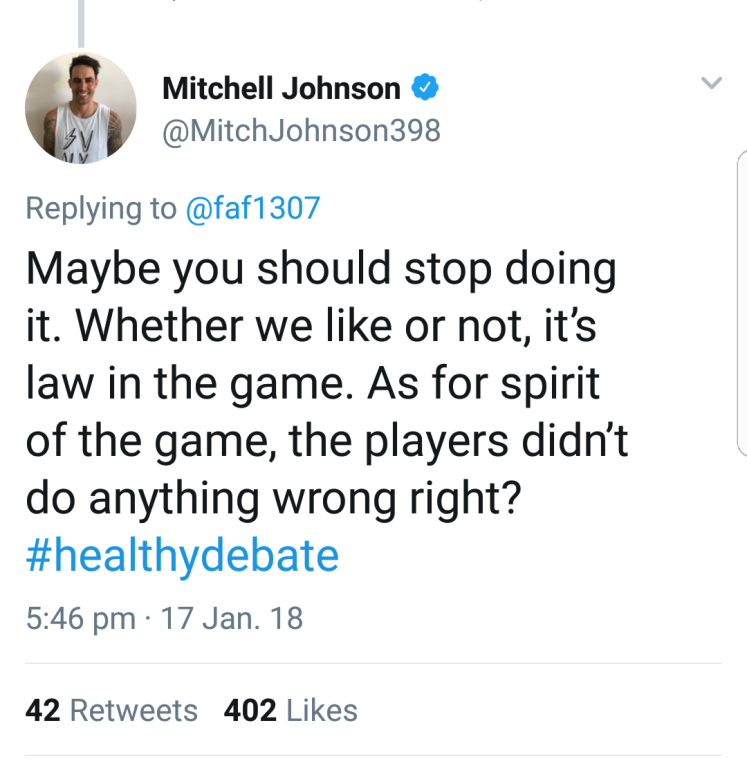 As contrary as Johnson’s point is to the majority held view it is one that cuts to the heart of the matter. How can a team be at fault when abiding by the agreed laws of the game rather than a disputed and undocumented series of conventions?

How is it, that the team playing to the rules are those deemed to be outside the ‘spirit of the game’, rather than the lawmakers who drafted them or the player that breached them? Shouldn’t the responsibility of ensuring that Pilay was not dismissed in a distasteful way lie with him rather than with the team charged with dismissing him?

While people have the right to find the dismissal as unpleasant as they want, it is time that this was shared in a more mature way. Question the rule as much as you want but it is not up to cricket teams to place your values higher than the laws of the game. It’s also wise to remember it is difficult to be ruled out obstructing the field for handling the ball if you don’t pick it up in the first place.