The Canberra Raiders 32-6 loss to the Melbourne Storm was an infuriating and desperate mess of spoiled seasons and unmet hopes. The Raiders flailed, first in hope and then in frustration against a side superior to it in every facet. Too impatient to succeed with Plan A, the Raiders instead jumped straight to Plans B-Z, checking every idea along the way. Rarely did they work. If nothing it was a fitting end to 2017’s kidney stone of a season. 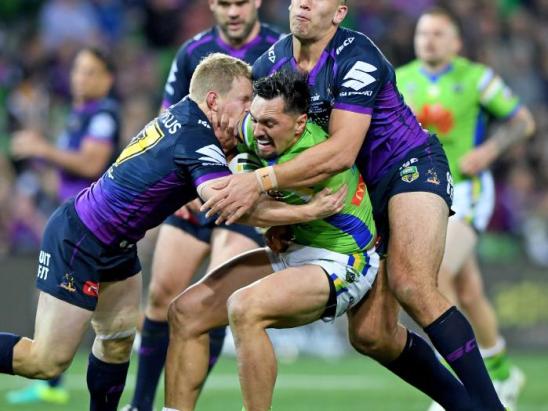 When the Raiders have succeeded in the Stuart era it’s been because they have dominated sides physically in the middle of the park. Against the Storm they found a side that wasn’t interested in letting that happen, and the Raiders starting middle forwards – Junior Paulo (10 runs for 86m), Shannon Boyd (6 for 65m) and Dave Taylor (2 for 22m) – were outmuscled. In fact, in the first half the most reliable metres they found in the middle came from rake Josh Hodgson, who stole sixty plus metres on the ground before it was time for oranges. On the edges Jo Tapine (11 for 110m) and Josh Papalii (13 for 131m) showed they will be a force on each side of the ruck for a long time. But you can’t build a platform if you can only make metres on your edges.

It was a sad end to the season for the forwards. Shannon Boyd has had a mostly down season, with a brief period in the last month where he’s rediscovered his best form. During this time his physical presence in defence is almost on par with his otherworldly ability to turn dead runs into momentum changers. Junior Paulo has been excellent with the ball all season but his defence has been maddening. Again in this game he was out-muscled at the line, this time resulting in a try for Jesse Bromwich in the 7th minute. Taylor may yet be around next season, but two runs in a game is not enough for a rotation prop.

The Storm’s domination in the middle was even more pronounced when they had the ball.  Each of the Storm starting forward pack covered more than 100 metres for the game (bar hooker Cameron Smith). With the infuriatingly brilliant Smith orchestrating everything, the Storm found it easy to get themselves into attacking position. Most Raiders fans will consider the first Storm try a result of an ineffective clean-up job on an otherwise unremarkable kick from Cooper Cronk. But the Storm were in a position for an attacking kick because Cameron Smith spotted Shannon Boyd on the wrong side of the ruck, sent the ball the other way, and the Storm took 30 metres as the Raiders defence had to back-peddle to counter the fact they were outnumbered. This was hardly the only moment that showed up the Raiders forward pack. Tohu Harris had two tries and two line breaks, and the Storm scored twice in the first half around the sticks, evident of the dominance they had over the Raiders big men.

The brick wall in the middle of the park was a big contributor to the Raiders increasingly panicked attack in the first half. Instead of earning the right to spread it wide by dragging defenders into the middle, the Raiders skipped that step and tried their hand out wide. BJ Leilua and Jordan Rapana were guilty of playing too wide early, and multiple sets ended when the ball went out. The rest of the side joined in, the Raiders only interested or capable of making metres outside of the hash marks.

But after that the main culprit was Blake Austin, who aimed almost all his runs towards the corner post. This meant he could never play any of the options that may have presented on his inside. Nor was he a threat running the ball because the inside defence had nothing to worry about except Austin’s step. This hamstrung almost all of the Raiders attack outside him when he was the primary ball-player. More than once Austin found himself with nowhere to run, goose-stepping on the spot or spinning and running away from his support. Austin’s play of late has been much improved. He’s not a natural half, and the Raiders allow him too much ball early in sets and early in attacking movements. But unless Erin Clark is the second-coming the Raiders are only going to be a contender if he becomes a consistent ball-player. If he could adjust the direction of his play just in the slightest it would have a massive impact.

Nor more was this better demonstrated than in a brief period in the second half. It wasn’t until the 50th minute of the game that Austin straightened his run, found Sia Soliola on the inside and suddenly the Raiders looked threatening. Moments later the Raiders ran a double-second man move – Austin playing out the back like a fullback, with normal custodian Jack Wighton sitting behind a second decoy-runner. Both moves had Melbourne at sixes and sevens, but the Raiders failed to come away with points after either.

The Raiders finally got on the board in the 58th minute when Aidan Sezer took the ball to the line on the left, played inside to Austin who went through a sizeable hole. Austin couldn’t finish – he ran almost parallel to the goal line instead of continuing towards it. A quick play the ball, an excellent kick from Sezer and a good catch from Jordan Rapana and despte being down 20-6, the Raiders felt alive. This momentary optimism was put to bed minutes later when an improbable Will Chambers kick became an impossible try to Vunivalu. This try was just two players executing at the highest level. There was little that could have been done to stop it.

One can be hopeful that the Raiders look at the approach taken of those opposite. The Storm were merciless, consistent and thorough. They worked hard in the middle of the park, and when given opportunities on the outside they executed. In constrast, the Raiders didn’t show the commitment to their plans, the consistency in their performance nor the competitive effort required. The Storm are a very good football side and will probably win the premiership this year. To beat them you need to be at your best. The Raiders settled for being infuriating.

A note before we go. Over the next few weeks we are going to spend a bit of time analysing the ashes of the Raiders season. Get around us.