This weekend we saw the return of International Rugby League. The Four Nations Trophy, hard won by the Kiwis in 2014, was put up for grabs again in the UK after a one year hiatus. While it was great to see the Kangaroos on the paddock again in search for international silverware, moves off the field were equally as interesting. 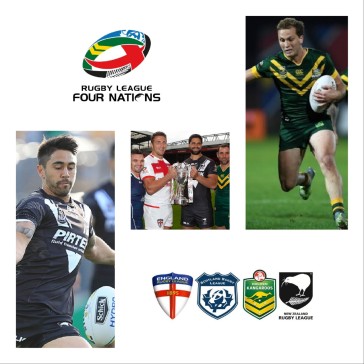 As rumours swirl of this being the last Four Nation Competition played, the Rugby League International Federation made some big announcements regarding the international game. One year out from the next World Cup in Australia, the RLIF awarded the 2021 tournament to the UK and, perhaps more importantly, recommended the 2025 tournament be awarded to North America.

The announcement represents an important development nearly 30 years after the ‘Mickey Mouse’ attempt to infiltrate the US with a State of Origin match in LA.

That match in 1987, won by a Peter Sterling led NSW, struggled to gain traction in the local media and was played in front of an official, but disputed, crowd of 12,349. Whatever the actual figure, most of the people were attracted to the match in Long Beach by the sight of Peter Sterling, Cliff Lyons and co cavorting at Disneyland, what is agreed is a large percentage did so with free tickets. 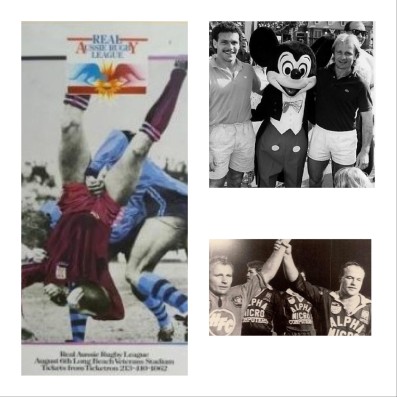 Announcing the recommendation for 2025, David Collier, chief executive of the RLIF, told awaiting journalists there is an “unprecedented opportunity to take rugby league’s pinnacle event … to the commercially lucrative and passionate sports audience of North America.”

The man behind the World Cup bid, Australian promoter Jason Moore, sees the World Cup as the first step in establishing a professional league in the US.

Rather than getting disappointed at the result of the 2021 bid, Moore chose instead to look towards 2025. “Of course I am disappointed but on the other hand we now have time to play for 2025,” said the promoter, before adding “we don’t give up”.

“Although it’s not a done deal, I would be surprised and disappointed if we now do not get the 2025 World Cup given what the RLIF has said publicly” said Moore, before setting his sights at other events in the meanwhile, “We can now look at getting some other events over here. Perhaps a State of Origin – the sky’s the limit.”

Another State of Origin might be unlikely, but the RLIF’s newly proposed Confederations Cup might be a possibility before the 2025 showpiece. The yet to be defined tournament is expected to be contested by eight countries and held biennially or quadrennially from 2018. Far from being merely a vehicle to showcase the code to American audiences, the Confederations Cup is a renewed effort by the RLIF to breathe life into the International Game. 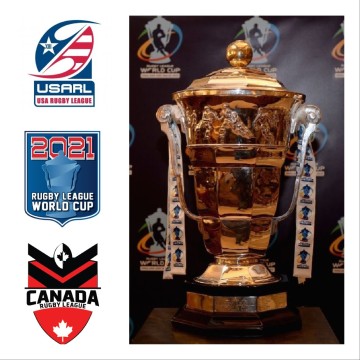 The Four Nations, despite best intentions, has failed in its intended purpose of developing second tier nations. To date a ‘guest’ nation has yet to claim a victory in a Four Nations tournament and the gap between the Big 3 and the rest has, if anything, increased after the completion of 4 tournaments.

It is expected, that with regular access to the Confederations Cup and the qualification rounds that go along with it, the strength of second tier countries will improve. In the mind of this correspondent it will represent a good first step. With childhood memories still fresh, of regular and meaningful International Rugby League, I can imagine the fruits of a successful implementation of this competition.

Money remains the major hurdle to a truly competitive international game. The situation was highlighted this year when Fijian Semi Radradra jumped at the chance to represent Australia, after serving his residency period playing for Parramatta. I don’t know for certain, but I believe the change of allegiance of ‘Aussie’ Semi, had less to do with his new-found love of meat pies, kangaroos and Holden cars and more to do with the fact that wingers wearing Green and Gold get paid more than wingers wearing Fijian White and Black.

This remains a problem the RLIF continues to grapple with. Recent changes to eligibility rules, where players can switch between Tier 1 and Tier 2 countries without serving a qualification period, seem designed to create more competitive matches in the short term, without resolving the over-arching problem. The RLIF seem reticent to enforce FIFAesque qualification rules because they fear players refusing to make themselves eligible for Tier Two nations and forego State of Origin and Kangaroos riches. As a result, at next year’s World Cup, Fiji could take the field with Kangaroo eligible Radradra and Jarryd Hayne among others.

Enough talk of tier one and tier two countries, what a weekend of Four Nations Rugby League. The Kangaroos showed why they are World Champions in despatching Scotland, England and New Zealand played out in an absolute thriller. If a one point game wasn’t exciting enough, Shaun Johnson’s winner sparked a level of conspiracy talk that Fox Sports ran adjoining polls of whether Johnson’s Field Goal went in and whether the moon landing was faked. I’m happy to report that 73% of Fox Sports readers agree it was a field goal and bewildered to report that 53% believe the moon landing was faked. 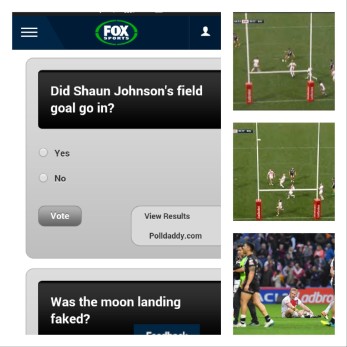 Disturbed as we are by the ‘moon landing’ survey, we are equally happy to see International Rugby League in the news again. Exciting as it is to see the International Game back in the spotlight there are several things that need to be resolved. The RILF need to work out exactly what they want to achieve through their national eligibility rules because as they stand they propagate a two-tier system rather than work towards bridging the gap.

As supportive of the conservative decision to award the 2021 World Cup to the UK as we are, we believe the RLIF should have been bold and announced the defeated US/Canada bid as hosts for 2025, rather than merely recommend it. Bravely setting sail for their new frontier would have provided nine years to prepare for the tournament. Instead the bid consortium sits waiting for assurances from the governing body before moving forward with their plans of growing the game on the American continent.

Whatever happens next, let’s just hope that this opportunity isn’t lost to time, like the night a State of Origin was played in Los Angeles 29 years ago.