The Art of the Deal

“The next question you might ask yourselves,” he continued with a more intense tone, “is what loyalty you should give your club if, one day, you might be traded for a player we need more than we need you.” His eyes checked their faces, he raised his hands, open-palmed, in a gesture that implied: ‘it could happen’. Then he answered his own question: “Well, the loyalty I want from you, first and foremost is to yourselves – as footballers.” 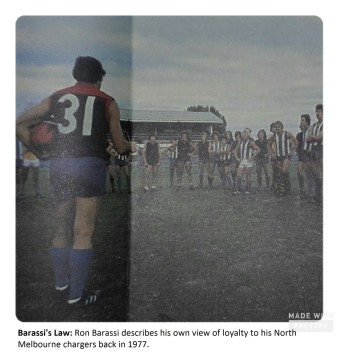 This is how John Powers describes an address by North Melbourne Coach Ron Barassi to his charges in his book The Coach – A Season with Ron Barassi. Powers described the events as the AFL Legend continued to detail his expectations when it came to loyalty from his players.

The scene Powers so wonderfully detailed is from a North Melbourne pre-season training session back in 1977. Almost 40 years ago the Super Coach was describing loyalty as a transferable commodity. Almost like a marriage of convenience, where if player and club did the best by each other, for as long as they were tied together, they had successfully met all reasonable expectations.

Despite Barassi’s very professional thought process all those years ago, the football world still seems shocked to its very core whenever a club and player end a fruitful relationship. As it was again this AFL Trade Period when Hawthorn and West Coast agreed to a trade that saw Sam Mitchell head west. The idea that a Premiership Captain, four-time Premiership Winner, five-time Best & Fairest and 300-gamer could end his career elsewhere, was impossible to fathom. When the Hawks doubled down and traded another four-time Premiership Star, Jordan Lewis, for a can of coke and a mars bar it is fair to say minds were blown. 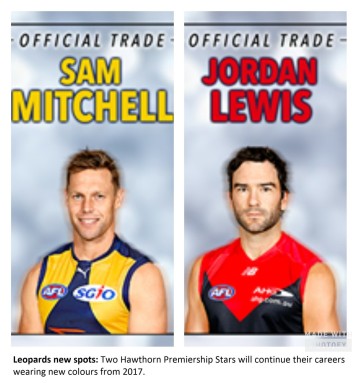 The prevailing view seeming to be, a not surprisingly very club serving view, that there is an honour and prestige to be found in finishing your career a one club player. A view offered by many in the football world when the question of whether Brent Harvey should continue his career elsewhere after his North Melbourne delisting (You can read what we added to that maelstrom here. This thinking along with an apparent stigma attached to ‘recycled’ players hit its zenith in the late noughties. So much so that in 2008, only six players were able to change clubs in that year’s trade period.

Then, just as it seemed impossible for players to change clubs, the wheel began to turn. Savvy clubs like Sydney began to look at other team’s fringe players to fill gaps in their list. The success of this approach, along with two new clubs on the horizon about to tie up the majority of young talent in the years ahead, meant the importance of trading for list development could not be ignored.

If that wasn’t enough, after agreement between the AFLPA and the AFL, 2012 saw the introduction of Free Agency. The agreement made to allow greater freedom to players through another vehicle to change club after specific length of service to the club that drafted them. An unexpected outcome of this was non-free agents being able to use impending free agency to take the whip hand when it comes to requests for trades from their current club.

The AFL, keen to further foster an environment of trading between clubs, introduced a few more levers to encourage it. Clubs were given the ability to trade future draft picks, which gave teams more chattels with which to satisfy demands. Bidding processes for Father-Son and Academy Players has seen some creativity between clubs to ensure that teams don’t miss out on the next Jack Silvagni or Isaac Heeney.

As a result of these amendments, player movements have gone through the roof. Compared with 2008’s six movements, 2015 saw 48 players change clubs. This kind of frenzy was replicated in 2016 with 22 players changing clubs on the last day alone.

The manner in which the feeding frenzy has taken place has led to some usually considered people to make outlandish remarks. One such quote was from Collingwood Captain Scott Pendlebury, who pithily opinioned, “The only thing contracts are good for are home loans when you go to the bank because anyone can get out of them whenever they want,” Pendlebury said. “I think it’s the end of contracts, they don’t mean anything anymore.”

The Magpie skipper, as is the case whenever the football world is outraged by something, was only partly correct in his thoughts. Pendlebury offered his thoughts in response to the news that Bryce Gibbs had requested a trade to Adelaide, despite being contracted to Carlton until the end of 2019. Unbeknown to the 5-time All-Australian, this particular case would actually show us the value of contracts, with the Blues unwilling to let their man go without compensation to their satisfaction.

Therein lies the crux of the whole situation – as long as club and player each have to sign off on any proposed trade, each is tied to the contract until both are happy to surrender its binds. Like most things in life, the security of an AFL contract comes at the cost of flexibility and vice-versa. Something Nigel Carmody, Gibbs’ manager, should remember when expressing his disappointment over the non-trade of his client only two years after signing a five-year deal.

It also is something to remember when questioning the cold-heartedness of Hawthorn’s trading of Lewis and Mitchell. Either or both, by virtue of their contracts, had the opportunity to stay with the Hawks. Each man chose greater security than the one year left on their Hawthorn contracts and the Hawks facilitated the opportunity for both to receive the greater guarantees on offer elsewhere.

That said, it wasn’t just in the spirit of rainbows and butterflies that Hawthorn agreed to move both their champions on. In the space of two weeks, as all outside the club questioned the logic of their moves, Hawthorn were able to replace two club champions with a couple of much younger, ready-made replacements who should be in Brown & Gold for the next 10 years. The final return is impressive but they were 10 minutes from disaster with negotiations with Gold Coast for Jaeger O’Meara finalised deep into the final stages of the trade period.

Then, after 38 players found new homes, 112 draft picks changed hands and a high profile move fell through with both clubs involved blaming the other, it was over. With the dust settled, there are definitely some clubs that appear to have done better than others. Making these kind of calls are fraught with danger but it is safe to say Adelaide wouldn’t mind having a ‘do-over’.

The rest of us can probably wait another twelve months before the clubs convene to do it all over again.