“In case you haven’t noticed, and judging by the attendance you haven’t, the Indians have managed to win a few here and there, and are threatening to climb out of the cellar.”

Acerbic yet gleeful, this was how Harry Doyle, the Cleveland Indians announcer in the Major League movies, greeted a fictional Indians winning streak. Although a creative construct, Doyle, a curmudgeonly, passionate and hilarious scene-stealer, beautifully captures the spirit and mood of a supporter base long starved of success. With this kind of excitement for a climb out of the cellar, you can only imagine how sharp-witted Doyle would react to news of the Tribes qualification for this years’ World Series. Maybe a little like this scene, but a little less reserved:

The Indians win the Pennant pic.twitter.com/6EZVb2LFSi

Major League is one of my favourite sports comedies of all-time, with memorable turns from Charlie Sheen as Ricky ‘Wild Thing’ Vaughn, Wesley Snipes as Willie Mays Hays, Dennis Haysbert as Pedro Cerrano and the wise cracking Doyle. None however is as important as the Indians and the entire city of Cleveland’s long wait for sporting success.

A wait that Doyle aptly, yet absurdly, summed up in the movie, “Don’t forget about Die Hard Night. Free admission to anyone who was actually alive the last time the Indians won the pennant”. In fact, the idea of Cleveland winning was too far-fetched even for Hollywood.  Major League’s happy ending wasn’t the Indians reaching or winning the World Series, but merely qualifying for the American League Championship Series (ALCS), the equivalent of a Preliminary Final.

This sense of resignation is understandable when you consider the fact that in 1989, when Major League was released, the Indians were 45 years removed from their last World Series appearance and 51 years from their last win. In the intervening years they had become more familiar with battles to avoid last position than those for the pennant. Their performances seeing them become completely insignificant when it came to playoff consideration in the 30 seasons up to and including 1989. In this time, they finished on average a whopping 23 wins away from playoff qualification and unable to finish closer than 11 wins off the pace.

In 1994, Major League Baseball introduced the three division system and with it, a Wildcard Playoff berth. With this reorganisation came a change of luck for the Indians, 113 games into the 162 game season the Tribe were in dogfight with the Chicago White Sox for the lead in the newly created American League Central Division.

One game off the division lead and well placed to claim the Wild Card berth if they fell short, the Tribe looked likely to reach the playoffs for the first time since 1954. But fate had one last heartache for Cleveland before the four-decade long drought could end, a pay dispute between players and owners led to a players strike and in turn, the abandonment of the remainder of the season.

With their post-season absence extended by another year, the 1995 Indians weren’t to be denied. With a batting lineup that led almost every offensive category ably supported by one of the stingiest bullpens in the Major League, the Indians swept almost all before them. In a shortened season, by the lingering labour dispute that ended the previous season, Cleveland won the Central Division by 30 games with a League best record of 100-44.

A sweep of Boston in the Divisional Series saw the Tribe taste their first playoff success since the 1948 World Series win. A victory in six over Seattle, meant a ‘Die Hard’ night in 1996 would be a costly exercise and saw them book a World Series date with the Atlanta Braves. The playoff hardened Braves proved too strong for the inexperienced Indians and brought an end to Cleveland’s fairytale in a hard fought six game series.

A Divisional Series exit followed another League best regular season in 1996, before Cleveland returned to the World Series the next season. In a thrilling series, the Indians traded wins with the Florida Marlins before meeting in a deciding Game Seven at Miami’s Pro Player Stadium. The Tribe clung grimly to a 2-1 lead as the enthralling contest entered the bottom of the ninth. With closer Jose Mena on the mound, and no team having rallied from behind at this stage of the World Series before, hopes were high in the Cleveland camp.

Mena had the Indians within 4 strikes from the World Series until Craig Counsell was able to muscle a Mena pitch into the outfield. Counsell was caught just inside the fence but the Indians were unable to stop the tying run advancing from third base. Mena was able to prevent any further damage to see the game go to extra innings.

The bottom of the eleventh proved decisive. One out away from a 12th innings, the Marlins Edgar Renteria was able to squeeze a hit past, or more accurately off, the Indian’s pitcher desperate glove, and through the infield. Renteria’s strike was the dagger to Indian hearts as Counsell advanced from third base to score the winning run for Florida.

The despair of World Series defeat was not enough to prevent Cleveland from qualifying for the post season three of the next four seasons, but they were not to reach the heights of the previous few seasons. Wilderness quickly re-engulfed the Tribe with two playoff runs the only respite before this season.

As has been the case for the majority of their existence Cleveland, with the eighth lowest payroll in the Major League, began the 2016 season at long odds to win the title. Under the stewardship of Manager Terry Francona, a two-time World Series Winner with the Boston Red Sox, the Indians have spent the entire season confounding critics. After a 94-67 regular season, Cleveland have qualified for the World Series after dropping only one post season game, despite hitting a miserable .168 in the ALCS against the Blue Jays.

As a result, they sit and wait for the winner of the NLCS between the Chicago Cubs and LA Dodgers, joining them at Progressive Field for Game One of the World Series. Remarkably a Cubs NLCS win might see the Indians’ surrender World Series ‘Cinderella’ status. Chicago’s championship drought – dating back to 1908 – making Cleveland’s appear positively brief. 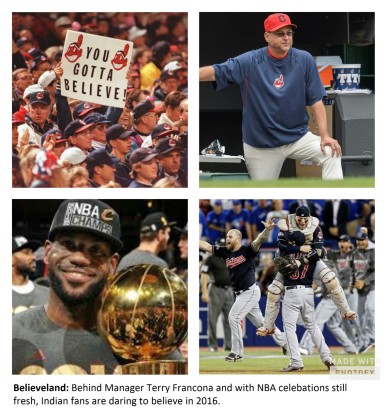 I’m not sure Clevelanders will be too concerned with this. Their city for a long time derisively referred to as ‘The Mistake on the Lake’ is looking for a new moniker. With the city’s 147 season major sport championship drought ended with the Cavaliers’ NBA Victory this season, an Indians World Series win could make ‘Title Town’ an appropriate epithet.

4 thoughts on “Cleveland – From Mistake on the Lake to Title Town?”