The Western Bulldogs are AFL Premiers.

It is still a little hard to believe but after 62 years, with victory over the Swans on Saturday, the Bulldogs brought an end to what was the longest standing Premiership drought. Playing a bold, brave and daring style of football they claimed the crown of on-field kings. The same characteristics that led to their long held and undisputed position as the League’s leader in cheer squad banners.

The tradition of piecing together crepe paper with sticky tape and cheer squad love, sweat and tears is one of the game’s most beloved. In recent years the messages emblazoned on them had descended from inspiring, witty or cheeky to much less interesting and much more generic missives of support. After another such effort from the Doggies in 2014, comedian and Bulldog tragic offered his creative sloganeering to the Cheer Squad.

McGinley’s support for the club stems back to childhood when his mother returned with the cheapest jumper at Kmart – Footscray. He attacked his new task with the belief that “Having a good banner is like kicking with the wind.” In deference to Jan, the volunteer who cuts the letters every week, McGinley’s messages are confined to 50 letters and don’t contain W’s. The second stipulation due to Jan’s refusal to cut them because of the letters difficulty to crop.

Irreverent, cheeky and playful, McGinley’s banners have touched on subjects ranging from politics and the virtues of the West Gate Bridge v Sydney Harbour Bridge to the taste of fortified wine and the cost of coffee in Perth. But not all his ideas have been to everyone’s liking. 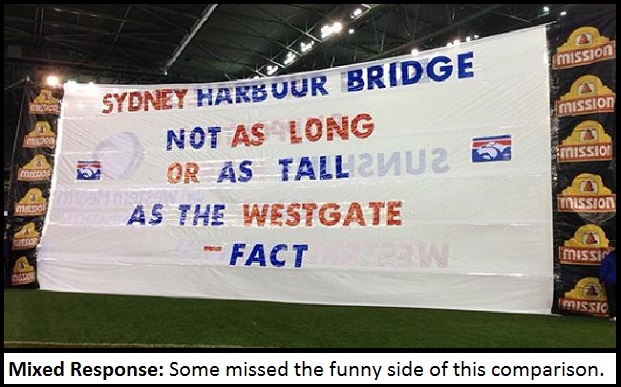 Before a Bulldogs v Swans match in 2014, the football team that crosses the Westgate Bridge more than any other ran through a banner that read ‘Sydney Harbour Bridge not at long or as tall as the Westgate Bridge – Fact.’ To which Anthony Sharwood from News Limited wrote a ridiculous article titled ‘Western Bulldogs banner may just be the lamest banner in the history of lame banner. Fact’. While I can understand how Sharwood mightn’t find the banner as funny as I do, his response is a little excessive.

McGinley has been surprised by a few that made it through the Bulldogs sensors, he spoke to ABC Radio about one of his favourites. “‘At the end of the match we’ll still be cheering, you’ll still be worried about your negative gearing!’ — when that went up I was told by my sources in the MCC there was a lot of tut-tutting by the Melbourne fans.” This effort, he jokingly thinks, may have seen him banned for life from the Members area.

Not all of his ideas get cut by Jan and her razor sharp scissors and presented on match day. ‘Anyone ring their brother this week’ was considered too risky for the Bulldogs match with Adelaide this season. Probably too soon after the AFL investigation into the Tahlia brothers, one a Crow one a Dog, sharing intel ahead the clubs’ Semi Final clash last season.

His first choice for St Kilda matches ‘St Kilda – Patron Saint of Wooden Spoons’ and his nod to club sponsor for Collingwood games ‘Slater & Gordon – Keeping Collingwood Fans Out of Jail since 1935’ are also non-starters.

A bit like on-field, where sides lift when they take on the Premiers, the same as been true when opposition cheer squads create their banners for Bulldogs games. Channel 7 commentators were bewildered when Port Adelaide’s cheer squad lifted ‘Port may give you gout but it’s great with cheese. Bulldogs give you nothing but fleas’ unaware it was a return serve to McGinley’s effort of 12 months earlier ‘A Bulldog’s love, never in doubt, port tastes yuck and gives you gout’. The Bulldogs banner efforts even drew a season best out of their St Kilda counterparts ‘No Pokemon here, 22 dogs to be found, we’ll catch them all and send ‘em to the pound.’ Apparently Pokemon was a thing way back in July. 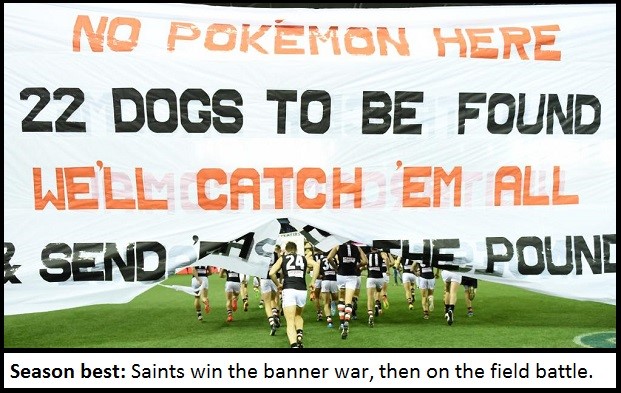 Don’t expect all clubs to join in the fun. A comedian friend of McGinley’s informed by the team he supports that “funny banners go against their core values’. McGinley refused to name the club in question but when pressed advised “I won’t name names, but they used to be called South Melbourne”.

After a red-letter season on-field was capped with the ultimate prize, let’s take a look back at the Bulldog’s season in crepe paper and sticky tape:

Round 2 v St Kilda – ‘It’s a really big day for the boy they call Roo. We’ll give him a guard of honour and thump the Saints too.’ – A tribute to a respected foe, Nick Riewoldt, on his 300th game.

Round 3 v Hawthorn – ‘We’ve beaten the rest now let’s beat the best’ – Undefeated and ready to take on the Premiers.

Round 4 v Carlton – ‘It’s a night game. That explains the Mid-Strength Carlton!’ – A banner that almost rewards having to drinking Carlton Mid at night games.

Round 5 v Brisbane – ‘What are your legs? Steel Springs. What are they going to do? Outrun the Lions. Lest we Forget’ -An ANZAC Day message utilising the iconic line from the movie Gallipoli.

Round 6 v North Melbourne – ‘The only place North Melbourne should be ahead of Footscray is the St Albans Line’ – A Top of the ladder clash and the Bulldogs unhappy with their second position.

Round 7 v Adelaide – ‘Revenge a dish best served cold. Pie floaters a dish best not served at all.’ – An ode to avenging a finals defeat and a dig at an Adelaide culinary staple.

Round 9 v GWS – ‘Thoughts are with you Rough #2. #BulldogsFamily – A classy message of support to Hawthorn’s Jarryd Roughead as he battled cancer.

Round 10 v Collingwood – ‘Recognise the people from before Federation, we will win today for the Kulin nation.’ – An indigenous round message.

Round 11 v West Coast – ‘Eagles travelling to Victoria this weekend, Velocity Points – 6954, Premiership Points – 0.’ – A humorous take on the West Coast Eagles and their travelling woes

Round 12 v Port Adelaide – ‘The greatest Jordan to ever wear #23, Congrats Roughy 100 Games.’ – A slightly biased tribute to Jordan Roughead on his 100th game.

Round 13 v Geelong – ‘#Standup #Speakout – White Ribbon Australia.’ – An important message about an important cause.

Round 15 v Sydney – ‘We will win this game and party till late, or till all your pubs close at 8.’Sydney’s lockout laws offered as the only possible dampener on Bulldogs celebrations.

Round 16 v Richmond – ‘Many cultures. One great game. Seven Continents. One Great Club. All religions. One JJ.’ – Recognition of multicultural round and Jason Johannisen.

Round 17 v Gold Coast – ‘The sun always sets in the west’ – A geography lesson for the Gold Coast Suns.

Round 19 v Geelong – ‘In the time it took to read this, Easton took 4 intercept grabs. Congrats Woody – 100 Games.’ – Recognition of the Dogs stand in skipper and his ability to get in the way of opposition attacks.

Round 20 v North Melbourne – ‘Fact: No player has ever won their 428th game.’ – It still remained a fact after the Dogs beat Games Record Holder Brent Harvey and his Kangaroos.

Round 22 v Essendon – ‘See the Bombers fly up to win the Premiership Flag. You don’t win a flag you win a Cup and Cup rhymes with up!’ – McGinley’s take on this one “This will forever be known as the banner that the pedants hated. Yes, I’m aware you do win a flag, but that’s not the joke. Please stop tweeting me.”

Round 23 v Fremantle – ‘Pav – The dictionary definition of an admirable opponent’ – a touching tribute to the retiring great Matthew Pavlich before his final game.

Elimination Final v West Coast – ‘We are the better side with the better engine room. The Eagles’ season will be over just like the mining boom.’ – Bold predictions of doom and gloom for Western Australia.

Semi Final v Hawthorn – ‘Tonight the Hawks have 75,000 members but the Bulldogs have 24 million supporters.’ – A correct summation of the public mood ahead of their meeting with the 4-peat chasing Hawks.

Preliminary Final v GWS – ‘Our club was formed in blood and boots not in AFL focus groups’. – A biting observation of their ‘artificially’ formed opponents.

On Melbourne Radio before their Grand Final banner was revealed, McGinley discussed the creative process and a couple of rejected ideas, “I started writing on Sunday when I was the most hungover man,” he said. “The first few were just ‘ugh, someone get me a can of Coke’ or something. But we’ve gone more for the angle of grandiose rather than funny”.

“We were going to say ‘we’ll lift the cup and sing the song, stuff your harbour, we’ve got the Maribyrnong’.”

“We’ve had a horror run of injuries, everything but ebola, today we will drink champagne, the Swans can keep their COLA,” he said.

They ended up going for the aspirational over comedic.

Grand Final v Sydney – ‘We’ve beaten all the others, overcome the odds, today this team of puppies become true Bullgods.’

Delivering the clubs second ever premiership and first in 62 years they did just that. Top Dogs on crepe paper and grass alike.