Brett Lee announced his retirement on Friday from all forms of cricket.[i] The career eulogy of retiring Australian cricketers generally encompasses four phases: Phase One – early brilliance; Phase Two – hurdle to overcome (i.e. gets dropped, gets out hooking, gets dropped by right hook;  Phase Three –  overcomes hurdle to enter a period of dominance: Phase Four – dominance diminishes slightly but record is solidified as retirement nears. In the last few years there has been a Phase Five, continuing to play Twenty20 cricket around the world for longer than anyone realises.

Brett Lee’s career fits this narrative fairly neatly. Phase One – 5 for 47 on debut against India, and 42 wickets from his first 7 tests; Phase Two – a series of injuries and omission from test team (during which time Kapsrowicz is preferred fourth string in the McGrath, Gillespie, Warne dream attack); Phase Three – carrying the attack post Warne and McGrath and winning the Allan Border Medal in 2008; Phase Five – playing Twenty20 for four years after retirement from international cricket and six years after playing his last test.

Phase Four is conspicuously absent from Lee’s career – for tests at least. After finally assuming the mantle as Australia’s spearhead, a combination of injuries and the emergence of Mitchell Johnson in the 2008-09 home series against South Africa, meant that Lee never strung together a profligate sunset to his career. Despite not having the chance to pad out his test stats prior to retirement, Lee did end up with 310 test wickets, placing him fourth on Australia’s all time list behind Warne, McGrath and Lillee.

The absence of Phase Four from Lee’s career is particularly interesting. Phase Four for most express bowlers is when they switch gears and come to rely on either hooping swing and accuracy (Wasim and Waqar) or height and angle (Ambrose) to continue to take wickets once the raw pace has gone.

Lee never really changed gears. At various stages of his career, Lee and those around the Australian team would make comments about a new focus on line and length, but ultimately Lee stuck with raw pace to the end.

One of the oft quoted lines when Lee’s retirement was foreshadowed is that this summer was his twentieth season of bowling over 150km per hour. How this achievement stacks up historically against other speedsters is hard to verify. No one is out on a limb saying a) this is impressive or b) few others can make similar claims.

During the early-to-mid 2000s, Lee and Shoaib Akhtar were a two-man renaissance of genuine pace. Their battle for bragging rights for quickest bowler was exciting. The late 1990s had seen a real lull in genuine pace; Courtney Walsh’s nagging trundlers were all that was left of a generation of West Indian quicks, Allan Donald was in his Phase Four, while Australia had Adam Dale, Tom Moody and Paul Reiffel in their One Day attack.

Of the two, Lee was always the more fluent to watch. His wrist position and extended hop before delivery was textbook and at least gave the impression he knew where the ball was going to go. Akhtar always looked as though someone had dragged him out of a nightclub at 3am and he was taking out his resentment by running in from the fence and throwing the ball at the other end as fast as he could.

The fact that Lee played 30 more tests and 60 more ODIs than Akhtar is testimony to the quality of his action and his perseverance in overcoming the inevitable injuries that any bowling position will cause at that speed.[ii]

Lee’s test record has the blemish of not including ten wickets in a match. Much like Mark Waugh’s lack of a double ton, it’s those big hauls that separate the good from the great when comparisons are made. If Michael Clarke never played another test, his triple and double centuries would have him best Junior, despite them both having 8000 test runs.

To be fair, Lee had McGrath and Warne to compete with for a slice of each test’s twenty wickets, but so did MacGill and he still took two ten-wicket hauls, and even Colin Miller took one. Dale Steyn, the dominant quick of the last ten years, has five, bowling in tandem with arguably the strongest South African attack to take the field since their return to the test arena in the 1990s.

Warne and McGrath in fact complemented Lee’s all-pace approach and allowed him to be a pure strike bowler. In the tests Lee played with Warne and McGrath he averaged 29 per wicket, compared to 30 for his career and 32 without the two greats. Conversely, Lee’s One-Day record stands on its own merit. Equal with McGrath as Australia’s leading wicket taker on 380, Lee took almost 100 more wickets than Warne, at a better average than the leggie and with a better strike rate than McGrath. Lee with the white ball even made up for his lack of big test hauls, easily leading all Australian bowlers in five-wicket hauls in ODIs with nine.[iii] One suspects that Lee and Michael Bevan will share words over beers in quite corners of reunions for years about old-timey cricket writers dismissing achievements in ODIs.

There is another phase captured in the career reminiscence story of Australian retirees, the obligatory zinc-cheeked back yard photo. For Lee, with perpetual Backstreet Boy hairdo, this phase never seemed to have been left behind. Watching Lee charge in, it was never too hard to imagine a skinny nine year old Brett getting tonked about the yard by a beefy 12 year old Shane, and little Brett going back to the end of the drive-way and swearing this time he’ll bowl faster.

Given their basic bro taste in music, there is also no doubt that Shane was a headfart tormentor of his younger siblings, the fuel of the fire that has driven younger brothers for thousands of years.[iv] When form, injuries and younger chargers tonked around the later year selection chances of Brett, he did what I imagine he did back in the yard: turn around and bowl fast regardless. 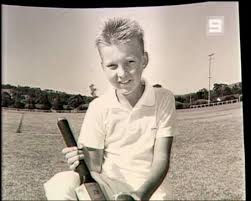 Whether Lee could have reinvented himself as a 130km per hour line and length bowler in order to eek out another 100 test wickets is a moot point – it was never him – and his decision to defy the years and keep on zinging them down in sportainment Twenty20 leagues for years beyond anyone thought he could, has left a legacy more unique than his test record alone ever would have.

[i] Retiring from Twenty20 cricket seems a little like retiring from WWE. You get the feeling that any former great could be goaded back into the ring at any stage and end up fighting the Undertaker (I presume the Undertaker is still wrestling because that guy is immortal).

[ii] Not to mention Lee’s significantly healthier relationship with his own cricket board.

[iii] No one else apart from McGrath (with 7) has taken more than three.