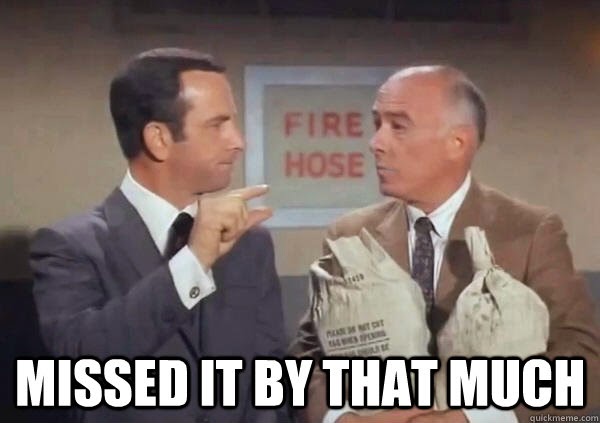 One gets the feeling that Maxwell Smart may have been a long suffering Raiders fan. Certainly we’re in need of his bullet proof optimism. Two weeks after the Raiders got out of jail using the years wonkiest field goal Karma decided to rebalance the scales.

Perhaps the most frustrating factor of Friday nights performance is how close the Green Machine came to toppling the lead team of the NRL. After the Panthers scored the first try of the match the Raiders wrested back control of the game and started putting a gap on the scoreboard.

The long term costs of this game far outweigh the two lost points. Rapana faces a lengthy stint on the sideline recovering from an untimely hamstring injury, but at least his other half Leilua should be right by round 15 (the shot of those two in the sheds is one of the most depressing Raiders related things I’ve seen in a while). The good news is the Raiders do have backline depth in the likes of Michael Oldfield.

If there’s one thing the team can truly rue it’s the 16 errors, with the ball coming loose one out of every two sets. If the Raiders had respected the pill just a smidge more they may well have left the Panthers in the mud. Neither team played conservative wet weather footy, but the Raiders played with more abandon.

One handed carries, high knees and too-eager play-the-balls all contributed to the high turnover rate. Perhaps the cruelest of these errors came in the last five minutes when young Hingano dropped the ball twice in awkward tackles. I personally feel bad for Ata – he’s a young half who should be honing his skills with Mounties, not trying to contort himself into Stuart’s bizarre version of a utility. I hate to imagine what these experiences are doing to his confidence.

The Raiders forwards did the best they could, but with so many sets ending before tackle 3 or 4 it was near impossible for them to generate any real momentum.

Most of the Raiders big gains out of their own half came from the likes of Rapana and Havili. Havili in particular continues to impress from dummy half, using his speed and size to get round markers and then bust through the next group of defenders. Rapana showed good awareness to take advantage of nonexistent markers and help himself to a tap and go run. His off the cuff 40/20 was one of the highlights of the match.

I honestly didn’t notice Sezer and Austin for most of the match. In fact the only memorable thing I can ascribe to either of them was the ball that Austin threw to Papa who then put Whitehead over.

The Raiders really could’ve had this one, and put it well beyond field goal desperation, and all they needed was a little more respect for that Steeden.