The world’s worst kept secret – that English half George Williams will be coming to Canberra – was made slightly more official today. The talented half had been rumoured to be making the trip to the Raiders since before the season began. Before the season we had assumed it had reflected a muddled mind-set from the Raiders administration. How could such a natural six fit into a side with Jack Wighton? 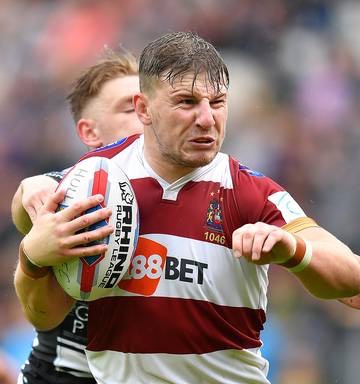 Before we jump ahead to speculating it’s worth remembering that the club hasn’t confirmed this and has been explicit about their desire to not talk about it in 2019. The transfer fee for Williams remains a sticking point, and James Hooper’s reporting is simply that everyone thinks he’s coming to Canberra. Nothing earth shattering in that. But it seems more likely than it did yesterday; and it will have real fallout for the Raiders.

If we’ve learnt anything so far this season, it’s that Wighton is learning quickly at five-eighth. He’s been the dominant half throughout the season, able to make the kinds of intelligent plays that many assumed beyond him. He’s hardly the finished product, but the pace at which he has improved this season suggests the Raiders would be fools to replace him with George.

All this means is that Williams seems likely to fill the role currently played by Sam Williams. Sam is a stable, dependable option in the halves. Off contract after this season, questions will be asked about whether he will fit under the Raiders cap going forward. I suspect his attachment to this club will see both sides of the negotiations find a place for him to stay, filling the role of safeguard if George doesn’t work out.

And that is a real possibility. As I mentioned before the season I haven’t watched a lot of his work. Smarter people than me have described him as more of a ‘running half’ rather than an organising half. Others, like the respected Fifth ‘n’ Last podcast described him (and I’m paraphrasing) as Blake Austin, but not as good. Hardy a ringing endorsement. Putting him and Wighton together could stifle the development of both of them, hamstringing a maturing team with an oversupply of ball-running sixes at precisely the wrong time for either player. Watching highlights of George, I can’t help but notice his best work is as second receiver on the left, making the exact same decisions (short/long/run) that Wighton has been doing for years now.

The potential for duplication is obvious, as are the skills both seem to be still developing. Can both consistently kick like they will need to? Will they split the field? Who will play on the right? Both may have to take on more organising than they are used to, and it’s a fair question whether either is suited to that role. We will have to wait and see in 2020.

Sidebar: Reader Tim Darke points out on twitter that a lot of the Raiders organising is done by Josh Hodgson. We agree. We’ve said plenty of times when talking about the Sezer/Sam debate that the role isn’t as important for the Raiders. It’s entirely possible this just takes that theory to its logical end. I can see it working, but it remains an unknown.

There’s also the risk the Raiders are taking in potentially upsetting a successful side in 2019 with talk of change. Sam Williams is too professional to be bothered individually, but one does have to wonder if the players like essentially being told ‘you’re a good half away from being good.’

The real loser is Aidan Sezer. Regardless of your feelings about him, his contract size and his place outside the main 17 mean he’ll likely move on by the end of the year. This will likely be necessary to ensure cap compliance. It marks a sad end to the story of a talented player that has yet to thrive in Canberra. Questions should be asked about whether this will threaten the ability of the Raiders to retain Jordan Rapana, which seems increasingly fraught the longer he goes without extending his time in Canberra.

We said before this season that bringing George Williams on board revealed a muddled mind-set. I no longer agree with that view. I think the Raiders believe that Jack Wighton and G-Williams will be the halves pairing for 2020, with Sam providing a capable and steady backup plan. The question now is whether they are putting too much on Jack and George, and whether they can fit together.

Only time will tell.

One thought on “Fallout: George Williams is Coming?”