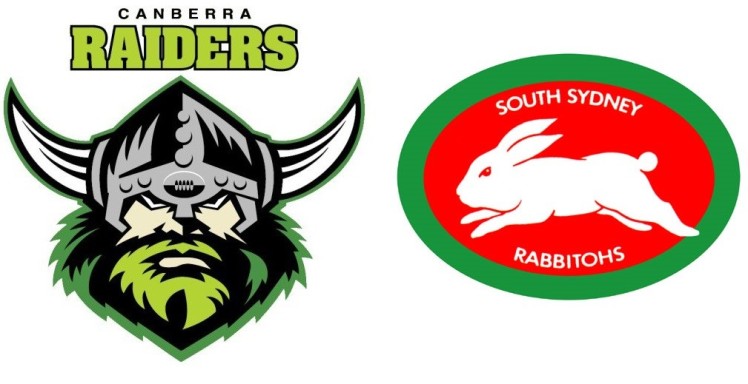 Round 23 gave Raiders fans some pain relief from the headache that is 2018. For 80 minutes the men in green knuckled down and got on with the job. It was the most un-Raider like win possible, constructed out of one converted try and four penalty goals. The Green Machine squared up against one of the form teams in the comp and showed them what’s what. Now they must do it all over again.

The last time these two sides met the Bunnies easily beat Canberra, walking away to the tune of 42-22. That was back in the early days of round 7, where ladder position means next to nothing. A win now, for Souths, can launch them into second spot, and have them hosting a home semi-final (although it has less impact because they play out of ANZ).

For the Raiders there’s not much to do but try and say goodbye to their faithful home fans with another massive 80 minute effort. Canberra have managed to pull an average of 11000+ people to home games this year, a vast improvement on the years when crowds could easily hover around half that. Given that the ACT has possibly the most febrile weather among all the regions in the NRL this is not something to be ignored.

There’s not much left to say about the Green Machine in 2018. Dan and I have hammered our respective talking points over the past few months, and it feels a bit silly to keep narking on about it with two games left to play. I must confess that I’m already beginning to dream about the new look Raiders of 2019, with a much more mobile forward pack and hopefully a stabilised spine in place.

Until then, let’s see if we can’t at least affect the chances of the top 8 in these last two games.

Possibly no Raiders forward has had a more up/down season than Joe Tapine. He’s either in and in great form, or out suspended or injured. He remains one of the Raiders most fascinating forwards to watch, due largely to his insane levels of leg strength which make him extremely hard to drag down in a tackle. Combine this with his ever-burgeoning running game and you have the makings of a true star second rower.

Soliola and Papalii remain the two lead impact players in the Raiders engine room, and prove that the future of forward packs is built around mobile, compact players. With the Bopper era waning clubs will actively seek out players like Papa who combine maximum effort with maximum minutes. 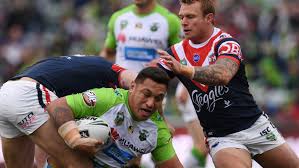 Of course before this change takes place the Raiders need to bring down a trio of Boppers – the Burgess Brothers. We don’t know what they put in the water where these guys grew up, but I bet there’s a few Russian officials who’d like to synthesise it for their own sporting ends.

Austin and Williams managed to surprise me last week, mainly by finding open space on more than one kick. In fact they did an altogether pretty good job of keeping the Roosters turned around or out of the game, by either kicking between the backs for turf or simply putting it out (on the bounce, thankfully) Surely these kicks went a long way to assisting the Raiders defence.

Fans from both camps will be excited to see a head-to-head battle between Hodgson and Cook, arguably two of the top three rakes playing. With Smith calling time on rep duties these two are now their respective international lynchpins, and it will be intriguing to see who can outfox the other.

The best stat for the back five against the Roosters was the single error from BJ. If they can replicate last week in terms of ball security then they go a long way to giving the Raiders the chance to escape their half unscathed. Oldfield returns to the side, which means that overall balance between the back line and second row is restored. He and Cotric should make for a formidable pairing down the left hand side.

Bunnies stalwart Greg Inglis makes his return, and alongside Dane Gai he brings the guiding hand of experience to the likes of Johnston, Graham and Hymel Hunt. The Raiders need to maintain a good line lest any of these guys try and exploit some broken field play. 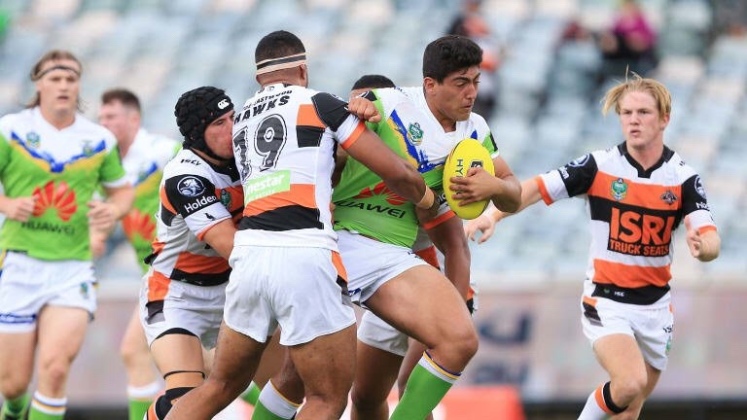 Havili – Continues to be the Raiders best bench option, lifting the team with strong running when he comes on. Look for him to make runs back in on tired defenders around the ruck.

Guler – Impressed on debut, and did enough to earn himself another week on the bench.

Paulo – Two games left until he turns back into an Eel.

The Rabbitohs can rotate through the likes of Burns, Murray, Clark and Tatola.

By now you should be in the zen space of hating the top 8 and watching 89 highlights on youtube.

Raiders scrounge out another 2 point win!