“Is there a rating you can use saying epic fail?” is the question RealSport101.com AFL Editor Sudi Chandrasekharan asks when discussing Gold Coast’s 2017 season. Even the most ardent Suns supporter who would find it hard to argue with his sentiment. 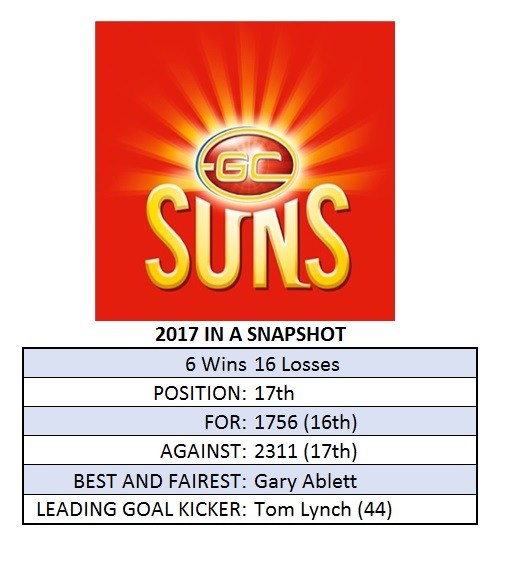 Despite Chairman Tony Cochrane spruiking for years that the Suns are not far from Finals Footy, they still appear in the headlines more often for off-field reasons than their performances on the paddock. Coach Rodney Eade became another scapegoat for this while the Gary Ablett soap opera rages on unabated.

Chandrasekharan, among others was surprised by the result of Gold Coast’s Club Champion vote count. “Gary Ablett, 14 games, wins the Best and Fairest,” he told Boz and Pav bewilderedly, “How’s that possible?”. Ablett, despite the incessant speculation surrounding his desired return to Geelong, was sublime when he was able to get on the park. The 33-year-old brought up his 300th game against North Melbourne in Round 15 and was averaging 33 possession per game before injury scuppered his season. Despite the scintillating form of the little master, it is hard to believe that not one other Sun could poll more votes than him despite potentially playing 8 more games.

Asked to nominate a positive for the season, Chandrasekharan was hard pressed. “The biggest positive for them this season would be the resigning of Steven May,” was the surprise highlight the editor nominated for the Suns 2017 season. It’s the kind of nomination that highlights the nightmare nature of the season for the team, but it is also a nod to May’s improved standing in the game. From outside the club his appointment as Co-Captain with Tom Lynch appeared surprising, after his 2017 season it’s a surprise no more.

In a season of doom and gloom there was a few bright spots, not least the pair of victories the Suns recorded over Hawthorn. The Round 3 victory would have been particularly pleasing for the 14,728 fans at Metricon Stadium who saw Brandon Matera kick 6 and Ablett and David Swallow with the ball on a string collecting 36 and 34 possession respectively.

Against the Blues the following week Tom Lynch produced one of the best individual displays of the season as the Suns recorded back to back victories. In a first half where he seemed to mark anything that came within his general vicinity he kicked five goals in a remarkable first half. By game’s end he had a career best 7 goals and the competition was again put on notice of Gold Coast’s budding superstar. Jack Martin was also a shining light in this game in the middle of a breakout season for the 22-year old. Martin’s improvement was not lost on Chandrasekharan. “He has shown he can be a really good player for them,” he told The Pinch Hitters, and it was not lost on the Suns either with the on-baller’s performances recognised with a third place finish in the Club’s Best and Fairest. 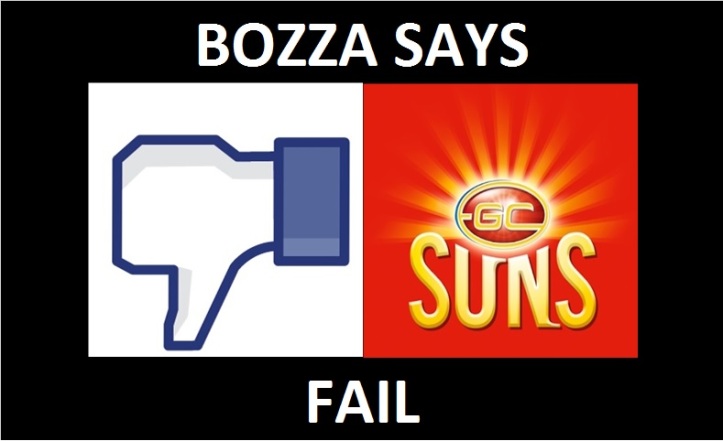 With the club losing patience with Coach Rodney Eade, even the Suns would struggle to mount a case for 2017 to be anything other than a failure. With the AFL appointing Mark Evans as club CEO, it is clear that Head Office is doing their best to turn things around quickly. Evans is considered extremely highly by those within the League and he would be an executive best skilled to have a positive impact on the troubled club. After seven seasons in the big time, if the Suns aren’t to join the graveyard of teams that have failed on the glitter strip, there needs to be serious change and it needs to happen quickly.

Check out The Pinch Hitters with Boz and Pav Podcast where the boys looked ahead to the finals and passed judgement on the Suns and all the teams that have already begun planning for 2018.