If the Raiders 24-20 loss to the Penrith Panthers isn’t rock bottom then I don’t want to be around when they get there. The Raiders were awful for good chunks of the game, found their mojo for a period in the second half and then collapsed in four minutes that will haunt the Raiders for the rest of the season. The Raiders can’t even think of making the top eight anymore. They first have to find a way to finish a game. 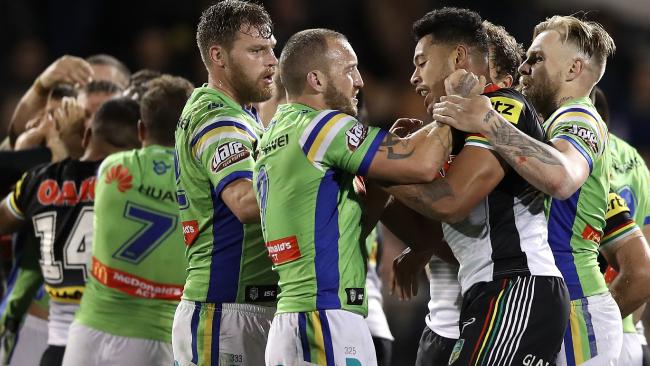 That’s not to say the Raiders deserved to lose. Like most recent games, the Raiders found a period where it started to look like maybe it was about to click. They were equally erratic with the Panthers in the first half, and they controlled the game except for the first minutes and last minutes of the second half. In the intervening periods it rarely felt like the Panthers were dominating. Over a period of about 30 minutes in the second half they scored twice from Aidan Sezer kicks, another after good work by replacement hooker Kurt Baptiste, and had two other tries overturned by the Bunker. This could have been a five-try half and the Raiders could have been back.

So how did this period come about? First of all the presence of Baptiste helped, bringing energy to the attack, and the big forwards into the game. Junior Paulo (18 runs for 167m) and Josh Papalii (21 for 188m) did the bulk of the work throughout the game and they were at their best during this period in the second half. Jo Tapine (9 for 101m) returned from his sin-bin and ran with vigor in this period also.

Baptiste’s presence moved Hodgson out from the ruck. I’m not normally a fan of this. Hodgson is the second-best hooker in the competition, and he does his best work creating and deceiving around the ruck. But tonight, particularly in the first half, he seemed to lack any energy and made several awful decisions with the ball, most notably in his kicking which was atrocious. Baptiste’s service in not comparable to Hodgson. It is slow, and often inaccurate – which is odd if you saw the dead-eye pass that hit Jarrod Croker outside his man for the second half try to Nic Cotric. But his presence in the ruck gave energy and direction to an attack that appeared lacklustre for the periods he was not there.

Moving Hodgson out to first receiver had two effects. He began playing straighter, running the ball to the line and dragging defenders attention to the right side where he set up camp. While he didn’t manage to fashion anything substantial, it gave the left side attack a bit more space.

The second impact of this move was Aidan Sezer took control of the attack. Sezer had already been having his best game for the Raiders, happily taking on the line at every opportunity, poking his head through on several. He ran several good little moves with fullback Jack Wighton on the Raiders left edge. These were the Raiders most promising raids in the first half, and often breached the Panthers defence as it rushed up quickly. He kicked twice for Raiders tries in the second half – one for Leilua and the other for Cotric, and another grubber should have been a try for Baptiste. While all had a degree of luck about them, they were the rare kicks from the men in green that threatened the Panthers back men.

The third impact that moving Baptiste into the ruck had was that it removed the ball from Blake Austin’s hands. A few weeks ago we said Austin was in the side on borrowed time, and smarter people than us said perhaps our take was a bit rash. Tonight made it hard to maintain an even temperament. He simply added nothing to the attack. When he got the ball in his hands he often ran away from his right-side attack. He barely gave Leilua and Rapana any early ball, something they feasted on last season, and when he kicked, notably only in the first half, it was pointless, panicky and poorly executed. He is a man searching for 2015 and completely out of ideas as to how to connect with the rest of his spine. The Raiders are suffering for it.

Austin’s play was compounded by the defence around him. The Panthers exclusively attacked the Raiders right edge, and scored all their points through that region. Sometimes it was Austin’s fault, others it was Clay Priest’s, and on a few occasions even Josh Hodgson found himself in the wrong position. But the Panthers ate the Raiders up through there all game, and in the end it hurt.

Each week for a while the Raiders have been saying “this game is the most important game”. They keep finding a way to make ‘this game’ the most soul-destroying. We made the point last week that the Raiders find the most inopportune times to make errors, and tonight was no exception. Cotric and Baptiste both should have scored off grubbers in the second half, one to put the Raiders ahead and the other to end the game. Defensive errors in the last five minutes that allowed the Panthers to go length of the field two sets in a row to steal the match were heartbreaking, frustrating and will result in me drinking all of my expensive whisky. The only consistent thing about the Raiders right now is that they’ll find the worst time to do something bad.

The Raiders have a bye now, a full week to have a think about whether they are serious about 2017. They said at the beginning of the year that they weren’t worried about expectations. Well no one has any expectations now. We’re all here at rock bottom with you.