Parra Post-Mortem: A Return to the Eight

In his second game for the club, Mitchell Moses again showed glimpses of why Parramatta was so keen to obtain his services in 2017. If South Sydney had any inside information, having faced him twice previously this season, it did not show as they wilted under the searing examination of his and Clint Gutherson’s clinical kicking games. As has been the case for most of the season, the Eels were unable to put together a full 80-minute performance, but the electrifying first half was enough to ensure that they were able to hang on for a well-deserved 22-16 victory. 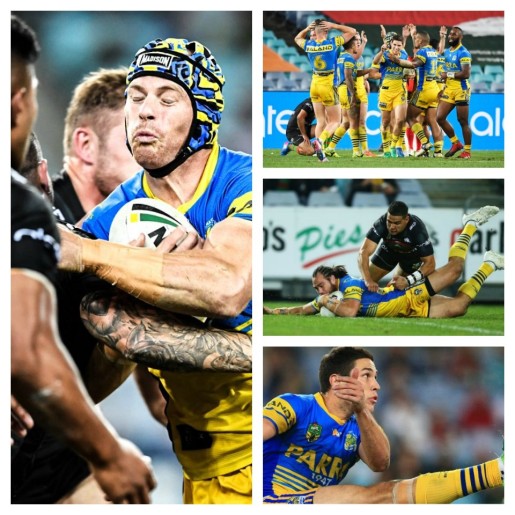 If Moses’ performance showed why the Eels were so keen to get their hands on him, the performance of his halves partner Gutherson highlighted why the Tigers were so keen to extract him from the Eels in return. The one constant in the Parramatta halves this year, the 22-year-old has had a breakout 2017 season. His kicking and passing game all season, and again on this night, silencing the doubts by some as to his ability to be anything other than a stop-gap playmaker. In fact, his performances have been so good that the Eels stocks in the halves are perhaps looked at enviously by those who were previously derisive.

Very much like the Storm and Raiders, Brad Arthur coached teams build the platform for their halves on the back of a big forward pack that runs straight and hard. It was no surprise then that in this match the Eels forwards were close to their rampaging best. Without the drive of Nathan Brown, due to his rib injury suffered against the Raiders, the rest of the pack lifted to cover for the lost backrower. It is a little unfair to single out specific players as there was no weak link, but Manu Ma’u, Tepai Moeroa and Daniel Alvaro were tireless in their efforts. This ‘go forward’ was helped no end by Semi Radradra and Josh Hoffman who covered over 100 metres. South Sydney will have nightmares after the flying Fijian ran for a whopping 192 metres.

Arthur would also have been pleased with the ball control of his team. In recent weeks, especially against the Roosters, this has been close to deplorable. Against the Rabbitohs however, the Eels high regard for ball retention was evident in the performance of the players. Completing 80% of their sets combined with the ‘go forward’ of their pack, Parramatta were able to dictate terms for the majority of the contest. While Arthur would be pleased with his team’s discipline with the ball, this wasn’t replicated in all areas of the game with the team giving away 10 penalties. It is an area of concern, because on other night’s opposition teams may not be as wasteful with the opportunities this amount of penalties bring.

On the subject of things that might not please Brad Arthur, there were a couple of odd refereeing adjudications in the back end of the second half. A try to Will Smith, on the back of a brilliant kick return from Josh Hoffman where the former Bronco left countless Rabbitoh defenders clutching at thin air, was called back for a forward pass that only the referee saw. It was a costly decision, Alex Johnston scoring for Souths from the resulting scrum win and a potential 28-6 Parramatta lead was instead 22-12. The next decision was more baffling, due to the fact that the man making it had the benefit of a video replay to make his decision. Referee’s boss Tony Archer at the start of the season kept a straight face when he told assembled reporters that the bunker had only made three errors in 2016. Considering this was his opinion despite a mountain of evidence to the contrary, it would not surprise if he deemed this the correct call too, or that night was day, or black was white.

Speaking of moments that defy belief, Josh Hoffman’s try in the second half was truly remarkable. Despite the frequency at which they are now beginning to be scored, it is hard not to be amazed by the kind of finishing required in Josh Hoffman’s millimetre perfect sideline tight walk to extend the Eels lead to 22-6. A week after a lack of precision was costly for the Eels, it was perhaps fitting that the ultimately game-deciding try was scored with the absolute minimum room for error.

Having reentered the 8 as a result of their victory over the Bunnies, the Eels’ attention now turns to another Friday night appointment at the Olympic stadium. Lying in wait for them – the erratic Warriors and former captain Kieran Foran. Victory against the New Zealand outfit can never be taken for granted, as was shown in the Round 6 match-up, but if the Eels are to play a role in September they simply must find a way to defeat the Warriors.