Saints Summary – Long Weekend Victories Over Collingwood Are The Best

St Kilda overcame a slow start and a determined Collingwood outfit to record their second victory of 2017 on Easter Sunday at Etihad Stadium. It wasn’t a lack of aptitude that saw the Saints surrender the early advantage but an inability to properly navigate a Collingwood structure that offered their opponents a much more direct route to goal. The intercept marking and close checking of Jarryn Gy, Nathan Brown and Jake Carlisle was vital in their team remaining in the contest only a kick behind the Pies at quarter time. 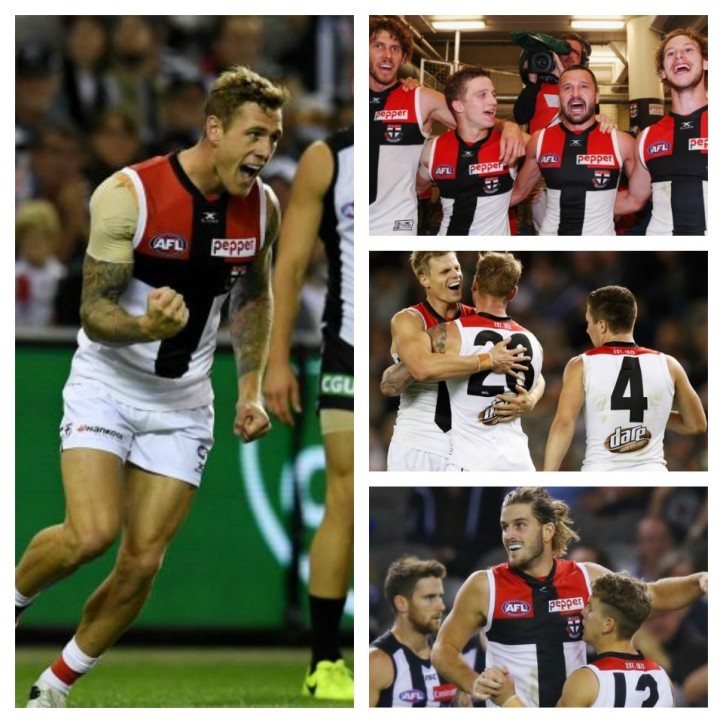 The wheel turned after the break with the Saints’ relentless hunting of both player and ball continually forcing Collingwood into error. With the Pies winning most of the beginning of quarter, it is no surprise that St Kilda scored 20 of their 22 points for the term from forced Magpie mistakes. Where the Pies found forward targets with ease in the first quarter, the St Kilda zone forced them wide or long to loose Saints for intercept marks and counter-attacks. In fact, the fortunes of the match can be summed up in the changed fortunes displayed in the marks inside forward 50 stat. At quarter time Collingwood held a dominant 6-1 lead in this statistic only to see it finish up 18-12 in favour of St Kilda.

With Dylan Roberton and Seb Ross dangerously close to developing leather poisoning, and with the pressure inside St Kilda’s forward 50 almost maniacal it, was only a matter of time before Collingwood succumbed. Yet the yips that plagued the Saints in previous weeks, 13.19 against West Coast and 14.23 against Brisbane, returned to impede their efforts to finish off an opponent over whom they had gained ascendancy.

St Kilda’s Ben Long, nephew of Bomber great Michael, was busy in his first AFL game. Whilst not getting his hands on the ball often, he displayed exciting glimpses and his forward pressure was exemplary. Saints’ fans would also have been pleased with the output of 2013’s number 3 draft pick, Jack Billings. While the former Oakleigh Charger’s wobbles in front of the big sticks continued, spending more time in the middle, he displayed ball-winning abilities he had been unable to show often as a forward flanker.

It was in the third quarter that the Saints blew the match apart, their spread and run completely overwhelming the Magpies. Despite Jeremy Howe and Taylor Adams’ best efforts, Collingwood had no answer to the marauding Saints. Seemingly, with more players at every contest, St Kilda managed to win the ball 34  times more than their opponent in the quarter and opened a 22-point advantage on the back of this imbalance.

Despite being outscored in the last quarter and the final margin reduced to a mere 14-points, the Saints were never in any real danger of having the game taken away from them. Showing incredible restraint and game clock management, St Kilda refused to be drawn into long kicks down the line or to outnumbered situations and instead drew Collingwood out of their zones before driving the ball forward.

Josh Bruce and Tim Membrey managed two goals each from limited opportunities, but continued to present throughout the match and provide an option that allowed the smaller men to profit at ground level. Blake Acres continued his promising season having some telling contributions throughout. Jack Steele, Mav Weller, and Luke Dunstan’s efforts, perhaps not evident in their possession numbers, were more than on show in tackle numbers of 9,7 and 7 respectively.

This pressure was evident throughout the 22 players, with each Saint laying a tackle as the team out-tackled the Pies 85-55. It is this ‘winning ugly’ that most pleased coach Alan Richardson.  “Given that we got beaten badly at clearance, but to win the entries 66-50 playing on the back foot was really positive,” the coach enthused, “I thought our method stood up. I thought our defence was really positive. We don’t want to be playing on the back foot. But what I will say is there’s clearance and there’s clearance. For a big part of the game we were able to put a lot of pressure on their clearance and mop up.”

After two hard fought victories, the Saints find their season ledger level at 2-2 and will  turn their attentions to the undefeated Cats. Having defeated Geelong last year, they will enter the match full of confidence and their defensive pressure will cause Chris Scott and his assistants some sleepless nights through the week ahead. Whatever the result, at 6pm next Sunday we will have a much clearer picture of the St Kilda’s true chances in 2017.