Australian Openers David Warner and Matthew Renshaw had innings to remember on the opening day of the Third Test between Australia and Pakistan. Warner’s record breaking innings saw Australia’s Vice Captain become the first man to score 100 in the opening session of a Test Match in Australia. Renshaw, in the perfect response to increasing media speculation about his position in the team, plundered the Pakistan attack for his maiden test match century. At close of play he was unbeaten on 167, he and fellow Adelaide debutant Peter Handscomb having added an unbroken 121 for the 4th wicket. Australia was in a powerful position at 3/365 at stumps.

Speculation abounds that Australia’s National Selection Panel (NSP) are eager to find a place in the Test XI for the much maligned Shaun Marsh. Prior to the play in Sydney, many commentators including Michael Slater, Brendan Julian, and Kerry O’Keefe had added their voice to calls for the unflappable Renshaw to make way for the return of Marsh for the Tour of India. Australian coach Darren Lehman did little to hose down speculation when he was only able to describe the young Queenslander’s first three Test Match performances as “reasonable”.

While Renshaw’s performances in Sydney will no doubt cause some of this noise to die down, the fact there was noise to quieten at all is absurd. After the Australian team’s capitulation in Hobart, the NSP made a conscious and definitive move in the direction of youth and potential. This approach has its risks (Exhibit A – Nic Maddinson) but it is the only way forward. In Renshaw and Peter Handscomb, the NSP have identified players that have shown the temperament and ability to play Test Cricket for years to come. There will be troughs along the way for both, but there has to be a long sighted view to this pair. Simply, any future omission of either player should be for another young player, not for a 33-year old who has failed to tie down a position in the team despite having numerous opportunities to do so.

Commentary during Renshaw’s spectacular innings suggest that those with axes to grind may not stay quiet for long. As Renshaw again put on 100-runs for the opening wicket with Warner, and as he continued with his innings after his thrashing partner’s dismissal, commentators led by Brett Lee lamented Renshaw’s scoring rate. Less than two months after Hobart, these voices seemingly having forgotten their own cries for players to value their wicket after a series of embarrassing capitulationsWhile a lot of this noise has come from outside the inner circles of the Australian team, there have been some worrying signs that the new beginning promised after Hobart may have been a false dawn. After seemingly giving up on the quest to squeeze an all-rounder into the XI, of the changes to the Melbourne XI two were trumpeted as all-rounders. Even more worrying ahead of a tour of India, one of the ‘all-rounders identified’ is Ashton Agar, a man with a First Class batting average of 27. With a straight face Coach Darren Lehman suggested that Agar could possibly bat number six in the Australian side. That is despite the fact that Mitch Marsh, the man ostensibly Agar would have been replacing in the team, is a better batsman.

John Hastings, the leading wicket taker in ODIs in 2016 when omitted from the team for the Chappell-Hadlee Series, has led calls for there to be another selector added to the NSP. Hastings proposal being that the new selector be the communication conduit between players and the NSP. When you hear the confusion from players like Hastings, Joe Burns, and Adam Voges as to where they think they stand in the selectors eyes, you can understand the value of this proposed position. Unfortunately, when you see comments like Lehman’s regarding Agar, you understand the confusion is mainly due to the lack of long term planning by the NSP. It is hard to advise players where they stand with regard to selection, when your thinking about them changes from one minute to the next, just ask Nathan Lyon.

This Australian team has come a long way in three Tests but face a much tougher challenge in coming months. While it will be difficult for Steve Smith to face the world’s number one ranked team on their own deck, it will be an even bigger test of our NSP.

Whether the NSP have successfully navigated the challenge won’t be measured by the results on the park but their reaction to them. If they believe Renshaw and Handscomb are 10 year players, they need to show that level of faith and continue to pick them regardless of results in India. They cannot repeat the mess that was the selection for the Third Test in Sri Lanka last year. The omission of Joe Burns and Usman Khawaja, two Tests after being two of our best performed bats of the Australian summer, was ridiculous. It’s time to pick and stick, the days of knee-jerk selections have to end. 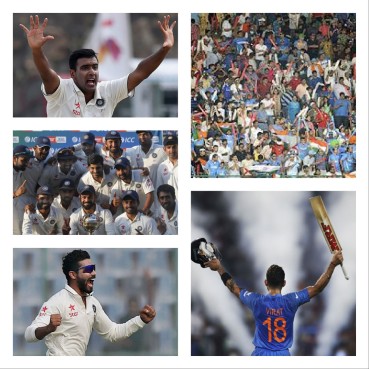 With four days still to play in this series it might be a touch early to be looking ahead to the tour of India, but it is hard not to. With one of their openers potentially too young to remember the last time India lost at home, Australia enter the series a true underdog. They also enter it with youth and momentum and it is funny sometimes how far that can carry teams.

How about that I got through an entire article regarding the Australian test side without mentioning Glenn Maxwell.

Well I guess there is always next time.