Is This The End of a Billy Goat’s Curse?

“You’re just too young. But we’ll take you the next time. We promise.” 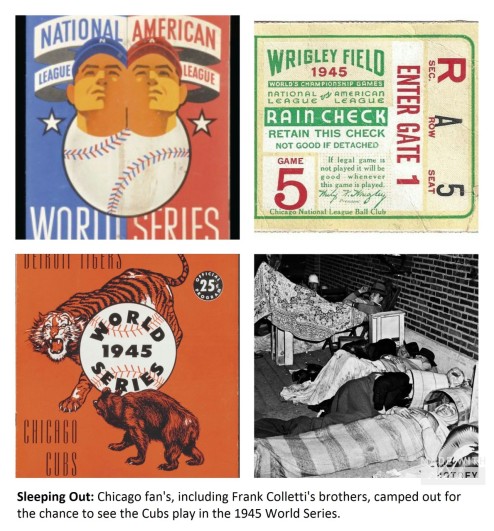 This was the promise made to 12-year-old Frank Colletti by his three brothers in 1945. The trio had decided upon an all-night line up to secure tickets to watch their beloved Chicago Cubs in the World Series. After a 71-year wait, with the Cubs victory in the weekend’s NLCS bringing an end to the longest pennant drought in Major League history, Frank finally has his next time.

Cleveland – From Mistake on the Lake to Title Town?

The idea that the 1945 World Series could be the Cubs last appearance for more than 7 decades would have been incomprehensible at the time. Chicago may not have won the fall classic since 1908, but having qualified ten times, only New York’s Yankees and Giants had contested the World Series more often. The sporting gods however had other plans for the City of Chicago. As if by curse, the Cubs and their cross-town rivals the White Sox would not win another World Series in the 20th Century, with the White Sox 1959 pennant the only one claimed by either until 2005.

The supernaturally minded looked for reasons to explain the inexplicable fall into championship insignificance of both Chicago teams. For the White Sox it was looked at as penance for the ‘Black Sox’ Scandal where the 1919 team, in cahoots with gambling groups, threw that year’s World Series. For the Cubs a much more remarkable tale became inextricably linked to their tales of woe and despair.

The most memorable urban legends endure because they straddle the line between plausible and unbelievable with just the right mixture of truth, disputed facts and exaggeration. As it is with ‘The Curse of the Billy Goat’, the most famous rebuff of a man and his goat in the history of sport, the colourful and improbable explanation for 7 decades of Cubs heartache.

The exact details of the curse are different depending on who you ask or what source you read. What is beyond dispute is that on October 6, 1945, Billy Sianis, owner of the Billy Goat Tavern in Chicago, arrived at Wrigley Field intent on watching Game 4 of the 1945 World Series between the Cubs and Detroit Lions. With him he had two $7.20 tickets – for seats 6 & 7, box 65, tier 12 – and his goat, named Murphy, covered in a blanket that read ‘We Got Detroit’s Goat.’

According to some accounts Sianis and Murphy were allowed entry to the ground, but were asked to leave by security answering complaints from other spectators that Murphy’s stench was insufferable. Others suggest that Murphy was denied entry at the turnstiles with the publican’s pleas with security for Murphy’s entry then taken all the way to Cubs’ owner PK Wrigley. Far from being too busy to deal with this kind of dispute, the Chewing Gum Tycoon was more than happy to pass judgement. Wrigley’s feelings, passed back to Sianis, was that the goat owner was more than welcome to enjoy the days play but “The goat stays out because it stinks.”.

The differing accounts can’t even agree on whether Sianis leaves or whether he watched the Cubs defeat, while poor Murphy waited outside, tied to a post in the Wrigley Field carpark. Either upon the completion of the game or upon Murphy’s refused entry or removal, Sianis and his goat returned to his Tavern.

Drinking in the bar are a couple of newspaper photographers who Sianis regales with his tale of Wrigley Field woe. Sensing a story opportunity, they ask the Tavern Owner to take photos of him feeding his tickets to Murphy. An opportunity Sianis sidesteps advising the pair “No, I keep them for evidence. No I am going to sue for $100,000 – no I sue for a million”. Stories of the angry tavern owner and his goat’s experience at the World Series appear in various Chicago papers over the following days.

None however, make any mention of a curse.

It was the results produced by the Cubs in future years that brought attention back to Sianis and his reaction on that day in 1945. As he left Wrigley Field he is said to have declared “Them Cubs, they ain’t gonna win no more”. His declaration was followed up with telegrams to Cubs Owner PK Wrigley where Sianis tells him “You are going to lose this World Series and you are never going to win another World Series again. You are never going to win a World Series again because you insulted my goat”. Another sent after the Cubs surrendered the series to Detroit 4-3 simply read “Who stinks now?” a clever retort to Wrigley’s description of poor Murphy.

In the 1950’s a Chicago paper printed a letter from Sianis suggesting that he would consider removing the curse if he received an apology from Wrigley. The Cubs’ owner’s response was also printed, in which he pleaded “Will you please extend to your goat my sincere apologies and ask him not only to reverse the hex but to reverse the flow and start pulling off wins.”

The curse grew and was reshaped and molded with each retelling as Cubs fans looked for answers to their team’s inexplicable struggles.

In 1969 Chicago was flying, spectacularly taking a 9 game lead in the race for the National League Pennant. Unfortunately for long suffering Cubs fans, by seasons end they did not find themselves under the bright lights of the playoffs but again in the shadow of a Tavern Owner’s Goat. As the Cubs collapsed from 9 games clear to 8 games behind, Sianis told the Chicago press “When the Billy Goat Hex is on you, there is nothing except trouble”.

Billy Sianis passed away in 1970, however the ‘curse’ still had a couple of heavy blows left to land to Cubs fans hearts. In 1984 Cubs fans dared to dream of a return to the World Series with their team 2-0 up in the best of five NLCS. Despair replaced hope however as the San Diego Padres won the last three games to reignite stories of the curse, as the Cubs were left to lament another opportunity lost.

Three more losses at this stage of the season awaited, twice at the hands of the San Francisco Giants in 1989 and the New York Mets last year. The Mets sweep ending hopes of Back to the Future 2’s ‘prediction’ of a Cub’s 2015 World Series Win. The National League Championship Series of 2003 however is the one that will stand out for Cub fans, their loss at the hands of the Florida Marlins one of the most infamous in Major League history.

At Wrigley Field in Game 6, Chicago led the match 3-0 and the series 3-2 and were a potential 5 outs from the World Series. What followed is the subject of a brilliant ESPN 30for30 Documentary – Catching Hell, if you haven’t seen it yet, find it and watch it. A high foul ball popped up towards the left field wall and Cubs Left Fielder Moises Alou. As Alou made his way towards the wall to claim the relatively simple chance, so too did a number of Cubs fans in the crowd. The eager souvenir hunters claimed possession of the ball before Alou could make the play and the game turned.

After 7 innings of impotent offence the Marlins batters exploded after the fan intervention. Florida batted around their order as they plundered 8 runs to take the lead and the momentum in both the game and series. A shell-shocked Cubs had no answer as they fell to defeat in Game 6 and the following days deciding Game 7. As if scripted, Bill Sianis’ son and grandson’s were refused entry to Game 6, having made Bill’s 1945 mistake of bringing a goat as a guest.

The 2016 Cubs have been carefully developed and shaped by President of Baseball Operations Theo Epstein.

Already a curse breaker, having being at the helm of the Boston Red Sox when they consigned the ‘Curse of the Bambino’ to history, Epstein took over a 61-win Cubs team. A shrewd operator, Epstein set out to build his team through trades with other teams under a very simple philosophy, “It’s best not to think about winning or losing trades anyway, because the best ones work out for both teams,” Epstein said. “But, as a rule, if you’re the team that’s selling — if you’re out of it and you’re trading with a team that’s in it — you usually have the pick of just about their whole farm system, with a few exclusions. You should hit on the guys that you get back.” Simple but effective, the Cubs slowly rising posting 66, 73, 97 and 103 win seasons with Epstein in the front office.

The job isn’t over for Chicago but Game 6 of the 2016 NLCS will no doubt live long in the memories of the Cubs fans. Kyle Hendricks gave a pitching masterclass as he retired Dodgers batters one after another while the Cubs offence slowly built a lead behind him. Even in my lounge room, over 15,000km away from Wrigley Field, the tension in the air was palpable. One can only imagine the conflict in the fans minds as they tried to reconcile contradictory facts.

No matter the convincing manner in which the Cubs were dispatching the Dodgers, years of heartache and despair made it impossible to feel comfortable. With a double play in the top of the 9th tension became celebration, the Cubs were going to the World Series.