Sometimes you see an idea so tremendously wrong that it makes you do a double take. In an attempt to solve the problem of an injured Jordan Rapana, “resident NRL.com expert” Jamie Soward came up with such an idea.

Jack Wighton to the wing. 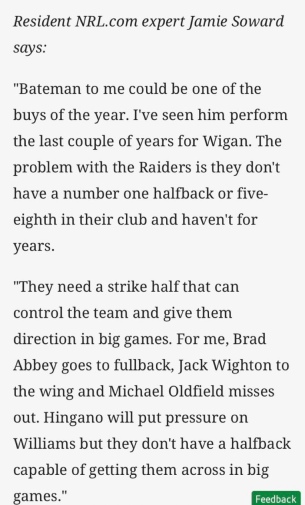 Jack’s best position is something that people argue about all the time. People want him playing centre because that’s where he started. Others see a potential Darren Lockyer-style switch to a hard-hitting, ball-playing six. One of the things we have written about recently is that Jack has actually become one of the elite custodians of the league.

You want to put me where?

Jack’s abilities are easy to see. He’s runs like a cannonball, tackles like a brick wall, and has become a deft hand with creative ball play close to the line. Anyone who has watched Wighton play knows his best work is done through the threat of his run opening space and passing opportunities outside him.

So what do you do with someone who’s a great in-line defender, a damaging ball-runner and an increasingly important part of the Raiders attack?

If your answer is “move him away from the ball” then I reckon you need to slow down on that post-Christmas cheer. Weakening the continuity and skill level of your spine to put an admittedly talented player on the wing is one of the weirdest takes I have heard this summer.

Shouts to Jon Tuxworth for alerting us to this

Jamie Soward knows more about rugby league than I have Doritos crumbs on my belly right now (that’s a lot). This sort of take belies that knowledge and suggests either he’s not done his homework, or he’s more interested in coming up with controversial takes than accurate ones. We’ve written before about the tendency of sections of the media to use team lists as an excuse for churning out thoughtless drivel. This is a good example.

Its pretty clear that Jack Wighton is not a winger. And maybe Jamie Soward needs to do more work to earn his title of ‘expert.’