If you’ve followed these pages, you’d know we’ve been quite fond of Mr Hodgson from day dot. Since he burst through the doors in 2015 (well technically that happened in 2014 but you get the idea) we’ve considered him the primary driver of much of the Raiders (albeit limited) success in that period. 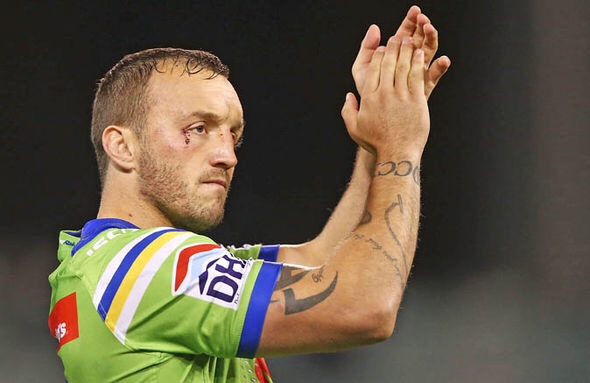 He has brought to the Raiders a creativity around the ruck not seen in Canberra since…maybe ever? Steve Walters was never creative, more wily. You could argue Luke Priddis was, but not as consistently as Hodgson and he never stuck in first grade (for the Raiders) long enough to show his wares. Simon Woolford was as hardworking and honest as a footballer can be, but creative? Deceptive? Not really. It’s been a revelation to see someone do so much around the middle third of the park; essentially becoming Canberra’s Cameron Smith.

Sidebar: before you get heated about me comparing Hodgson to either one of the greatest players ever and/or one of the most hated players ever, note I’m taking about Hodgson’s role as the dominant ball-player and organiser, a role traditionally performed by halves.

Canberra fans have spent the last 25 years desperately seeking for a dominant half in the mould of Stuart and Daley. For brief moments Campese and others have filled that role, but they were always given an impossible task. Stuart was the fulcrum of one of the greatest Rugby League teams in history. He organised a backline that could compete with any over the ages. And it didn’t work without him – just ask 1993. Asking any mere mortal to be a replica Stuart is unfair.

So while we were all looking for a half to emulate Ricky, Josh Hodgson came along and became the dummy-half we never knew we needed.

So happy birthday Josh. We can’t wait to see what the next year brings. Regardless of how the Raiders go, we know you will be in the middle of it.