BY BEN AND DAN

If you’re a Raiders fan you probably keep busy desperately trying to forget 2018 even happened. But just when you thought it was safe to re-engage with the finals, 2018 is back to remind you that yes, being a Raiders’ fan this year is about as much fun as eating glass.

You see the Broncos’ run into the finals has sprung the good news story of how former Raiders Tevita Pangai Jr turned his life around in Brisbane. Unfortunately, part of this story is Raiders’ head honcho Ricky Stuart telling the star backrower he’d never make it in the NRL.

Sidebar: Because of his defence!!! We told someone that their edge defence wasn’t good enough. I guess at least it’s proof it’s happened at some stage in the last five years.

Anyway, in honour of this stellar piece of man management we thought we’d put together a team of people let go in the Stuart era. It’s the players that Sticky rejects that make Sticky the ‘best’.

And just because we are Raiders’ fans masochists we thought we could call it the ‘Tevita Pangai All-Stars’.

Now obviously not all of these are totally Ricky’s fault. But for the most part, these are players the Raiders could have kept, but didn’t. 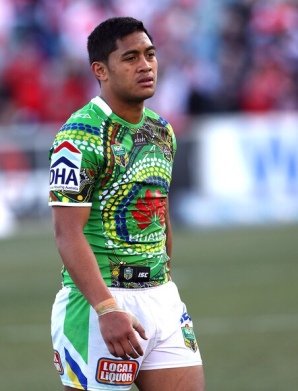 What was more painful – him engineering the second-half comeback against the Raiders in round 16 or him beginning to touch the edges of his potential over the last month? I say the latter, but only because who doesn’t engineer comebacks against the Raiders?

Eddie was defensible in that Sticky had to find a spot for Nic Cotric. But still, it felt like he had unfinished business after 2016’s sad end. And he’ll get a shot with the Sharks in the coming weeks.

BRENKO! was always hella fun. Liable to win and lose a game within 5 minutes, it’s also understandable he was moved on. He failed to stick around with the Dogs (despite being their best attacking weapon in 2017) but seems to have found a home in Rugby League Siberia (the Titans).

We got a bit shifty to fit this into a side. Yeah Austin spent most of his time a six, but this year he moved around so much that we feel comfortable putting him at centre. After all he looked better when he had the freedom to simply run.

Hawkins is yet to get off the bench in his tenure at the Storm, which again makes the decision defensible. When he played for the Raiders he had a hairdo that made him look like Rufio from the movie ‘Hook’. Man I loved that movie.

Lachlan Lewis kicks well. He also is a very good edge defender. He is young, and while he’s not much of a ball player yet, he is pretty much everything the Raiders didn’t get from their six position this year. Good times.

Mitch Cornish is one of those players we really liked, and we were very cranky when Sticky abandoned ship on him. The Eels and now the Roosters have seen his value, and we are still a bit sad he had to go.

Pangai is a force on the edge and a critical part of the Broncos’ premiership tilt. It would have been better if we could have kept him, but one wonders if he needed a) the kick in the pants and b) to be coached by Wayne Bennett in order to reach his potential.

Barnett for his part has enjoyed regular minutes at Newcastle. He’s great with the ball in hand but he lacks lateral movement in defence which makes me a sneaky bit chill about him leaving.

The treatment of Vaughan and Boyd by Canberra has been an endless source of fascination for us.

Other stuff we’ve written on Vaughan and Boyd

For Vaughan it has been unequivocally good. This year he’s played as part of one of the best packs in the competition (at least for the first part of the year) and played Origin, which is a true indication of his excellent play. I still miss him.

Boyd had his best start to a season for his career. He looked to be returning to the form that saw him picked for the Kangaroos in 2016. But injuries and the season seemed to wear him down. What I errantly considered at the time a lose-lose departure turned out to be addition by subtraction for the Raiders.

Bappers was a fan favourite, presumably because of his brilliant hard-running from dummy-half and not his comically slow and loopy service. Allegedly we were paying him nearly 400k for his 15 minutes of moving Josh Hodgson from his best position.

Has since found minutes for the Roosters (booo) but hasn’t got much game time in recent weeks.

Scott Sorenson: plying his trade for the Sharks

Mark Nicholls: in the Bunnies best 25.

Junior Paulo: A short stay in Canberra for the big man.

Coal Train! Give him six weeks and he’ll be ready to roll again.

Leave a Reply to Raiders Rumble! Raiders vs Sharks Round 2 Preview – The Sportress Cancel reply