Raiders Review: The Inevitability of it all

In Greek mythology the gods punished Sisyphus for attempting to cheat death by making him roll a boulder up a hill. Every time he got close to the top, the immensity of the boulder would see the ball roll to the bottom of the hill (Ed note: this was a really cool episode of Ulysses 31!).

This myth is meant to explain the futility of existence, but it may as well as be the Canberra Raiders 2018 season. Sunday’s 25-18 loss to the St George Illawarra Dragons saw the Raiders start rolling the immense boulder up a hill, hoping against hope that this time it would be different. Shit, they almost got to the top this time. But like the Sharks, Warriors, Titans and Knights’ losses, the Raiders turned a strong late game position into a loss, overawed by the weight of their task. This time it was because their middle was dominated, and because their halves capitulated late in the game. The reasons may have been different than other weeks, but the outcome was not.

Good forward packs have been able to get over the Raiders this season. Like the defeat to Souths, the middle found it almost impossible to control a pack bigger and more agile than it. The Dragons outgained the Raiders by over 300 metres with almost half of that gap made up in the difference in post contact metres (559m to 425m). Paul Vaughan (13 runs for 167m and 76 pcm) reminded the Raiders that giving him up to keep Junior Paulo and Shannon Boyd was a depressing error and not just because they’re both leaving anyway. The only Dragon’s starting forward (outside of McInnes) that didn’t crack 100 metres was Frizell and he had 98.

The only man in green that cracked 100 metres was Josh Papalii (19 runs for 182m and 72 pcm). In the last few weeks he has returned to the form that will earn him every cent of the contract he is apparently about to sign. The other Raiders forwards had so often spent their energy trying to hold together the middle of the ruck that they barely had the energy for an effective carry, especially in the second half. Most of the yardage work was done by Jordan Rapana (10 for 167m), Nic Cotric (14 for 136m and 47 pcm) and Jack Wighton (12 for 125m and 44 pcm)

The Dragons dominance in the middle failed to eventuate in the number of points it normally would due to errors (11), and the surprisingly effective defence from the Raiders edges. The Dragons were best when they focused on the middle third, and their first try came when they sent multiple rucks straight. A standard two-prop face-ball saw a scrambling middle unable to keep out Jack de Belin. They took the lead in the 48th minute when McInnes went straight up the guts, starting a breathtaking move that ended with Gareth Widdop scoring. It was interesting they didn’t remain this focused on the middle given their dominance.

It was a heartening defensive performance. The Raiders even held out for nearly the whole 10 minutes that Jordan Rapana was idiotically sin-binned late in the game, and the Dragons only scored because Matt Dufty’s pace was too much for the isolated poor Dunamis Lui, only defending so wide because of the missing winger.

With the ball there were moments that the Raiders looked sharp. The left side attack continues to be the Raiders strength. Early in the game Cotric scored when Sezer and Wighton both summed up the situation close to the line perfectly. Sezer gave early ball to Wighton, who sent it quickly to the wing. Cotric is near impossible to stop one-on-one close to the line and the Raiders scored easily. 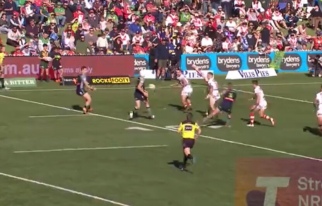 This side of the attack is effective because Wighton continues to make the right pass/run choices, and because Nic Cotric is a Monstar who must have stolen Jarryd Hayne’s ability to run the ball. The Raiders are trying to get him more involved in the attack each week, such as running him as the main focus off scrum-based set plays. They should continue to expand this.

I would also like to see the left side of the attack try to use a couple of different pivot points. Too often it is simply Sezer then Wighton and work it out from there. In years past the Raiders used both Croker and the second-rower as ball-players for Wighton to run inside lines around. It’s not an ‘every-time-down-the-field’ thing, but it would add some important variety to their left side attack.

On the right side though the Raiders attack is barely functional and it played a big part in the loss. Austin and Tapine have forged next to no connection, and the connection between Sezer and Austin is terminal. Late in the game Austin put two poor passes from Sezer down. The Fox commentators blamed the first on Austin being in the wrong position and the latter on Tapine not attempting to catch a ball directed to him. But you could blame either half and be happy (and both and be depressed).

Regardless it merely highlights the connection deficit that exists on this side. That the Raiders cannot turn Tapine into an attacking threat is infuriating. BJ Leilua and Jordan Rapana do most of their work through the yardage game and barely touch the ball in attacking movements. They both scored today in highly unrepeatable situations. BJ when Austin ran horizontal and everyone decided it was probably an obstruction so stopped playing. Rapana’s effort to go 50 metres to score off a quick-tap was brilliant, but the Raiders can’t hope for him to do that every week.

Sezer and Austin both failed with the boot, even as Sezer got more grubbers to sit in the in-goal than in many weeks. The Raiders chase was poor on many kicks, sometimes out of surprise. But given that chase has been broken for weeks now early kicks can’t be blamed solely. The best last tackle moves were when they put the ball through the hands on the left. Whitehead, Cotric and Croker all kicked on last tackles, and the Raiders made plenty of metres and created chances. But running the ball can’t continue to be the best option on the last.

And so here we are again. It’s becoming more difficult each week to outline the new and varied ways that the Raiders conspire to lose games they should more often win. I am sure that the frustration we feel is shared. Next Friday they face a weak Manly side that I am almost sure they will beat and handily.

So here I am ready again to help push that boulder up the hill. But if the Green Machine keep playing like this in close games we are going to have to get used to it. After all, it was only when he realised the absurdity of his situation that Sisyphus was able to find peace.