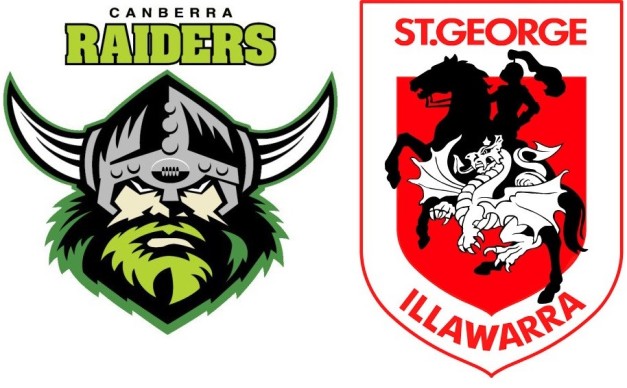 I’m back! Many thanks to Dan for holding down the fort while I was busy with other things ( I thought he did very well!).

The Raiders finished round 10 in ill humour, once again squandering a first half lead as they let the Sharks draw level and then pull ahead in the final quarter of the game.

The task is even harder this week, with a Sunday afternoon away game against the Dragons, one of the form teams of 2018 and the current ladder leaders.

Any decent Raiders fan will be very aware of the famous hoodoo which has sadly all bit vanished in recent years, with the Dragons holding most of the bragging rights since they snapped the Raiders head-to-head streak.

There’s been movement on the Raiders’ personnel front this week, with Shannon Boyd inking a deal with the Titans for a four year/$2.4m stint on the Gold Coast. While this unwelcome news for Raiders fans it can have a positive short term effect, with players stepping up a notch once they’ve secured future employment.

The Dragons have only lost two games thus far, to the Warriors in round seven and last weekend to the Bunnies. This does not bode well for the Green Machine.

The Raiders pack of 2018 will not look the same next year. With Boyd heading north and Junior Paulo considering a return to Sydney the Raiders will find themselves faced with a key decision – do they find two new big boppers or do they look to follow the smaller more mobile packs of other teams. The likes of Tapine and Whitehead show that mobility and strength are key attributes for 2nd rowers, and Dunamis Lui is finding his groove as a small prop. If anything Boyd and Paulo distort the issue, as their physiques are possibly two of the most unique models amongst all NRL forwards.

In the short term however the Raiders must persist with their rotating battering ram approach – start either Boyd or Paulo and hope they can make it to the 20 minute mark before being swapped.

Grudgingly I admit that Bateman continues to grow on me almost every round. Without the inept Priest to hamper him he’s beginning to find his way in the middle of the field, and while he still occasionally gets driven back he is making more decisive 10m+ runs.

If there’s a forward pack to be wary of it’s St George – Graham, Vaughan, Frizell and Sims are all in top form, and are ably supported by the likes of Ah Mau off the bench.

For a brief moment I thought we might finally get to see the combo of Havili/ Sezer/ Hingano with bench support from Garvey, but then we found out that Austin’s mishap was no impediment to him playing in this round.

Which means we’re all still sitting here awaiting (a) the return of Hodgson and (b) the debut of Garvey.

Sezer went right off the rails against the Sharks and he’ll need to be razor sharp against the Dragons if the Raiders want to entertain the chance of a win.

It’s just a shame we can’t play them when Hunt has been called up for Origin.

The Raiders back five worked hard last week, unfortunately most of this work was undertaken dragging the Raiders out of their end zone after Sharks kicks. There were moments of excitement but for the most part they were hampered by the extra role of emergency forwards.

Their Dragons counterparts are a mix of veteran experience (Nightingale) and impending Origin selection form (Aitken).

Look, I want to tell the Raiders can win, and statistically there is a chance, but I don’t think you want to know the exact odds. Suffice it to say it would require that the 17 in green play their best game of the year.

Raiders by a freak intercept try!