Like many decisions made by the National Selection Panel this summer, Mitch Marsh’s recall to the Australian team for the Third Ashes Test was greeted with a great deal of head shaking amongst the Australian cricket loving public. Replacing a player with a test average of 47, and with a number of other players performing better than him in the Sheffield Shield, it was a selection that appeared unwarranted on face value.

The first two days of the Test did little to dissuade this feeling, bowling just nine overs in England’s First Innings seeming to make a mockery of the NSP’s reasoning that they required a fifth bowler on the WACA pitch. It meant that when his brother was dismissed early on Day 3, he strode to the wicket with his team in a little trouble and with the worst record of a number six batsman in the history of Test Cricket. Whether he deserved to be in the position or not, an opportunity to produce a career defining innings was in front of him.

“I’ve had eight or nine months to change a few things with my batting and I think that’s working. Probably more [change] on the mental side, being able to deal with the pressures of batting for long periods of time is something I really wanted to work on and I feel like my game is in a really good place right now.”

As confident as he may have been pre-match, he would have been excused if he had a few nerves as he took guard for the first time with his team still 155 runs behind England’s First Innings total. If he was though, he hid it well as he went to work with his captain Steve Smith.

Those with an unkind leaning might suggest that the pitch was still a good one and the English bowling attack was far from it’s threatening best but to do so would ignore the fact that four of his team mates before him failed to prosper in the same conditions. It also disregards his dominating the run-scoring within his partnership with Smith. The Aussie skipper is in rare form and was well on top of the bowlers when Marsh strode the crease but when the pair departed the field for tea, he had scored just 66 of the 173 runs scored in their partnership. 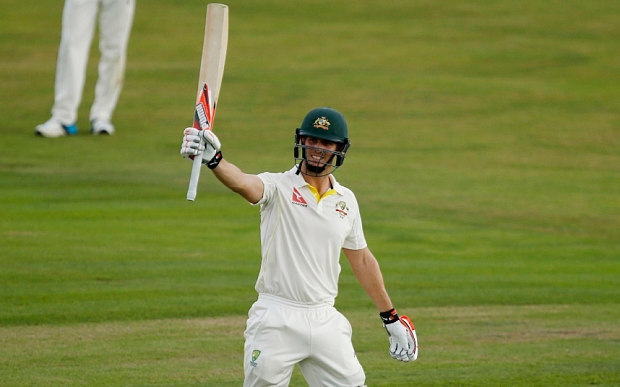 Four balls before tea brought a moment for Marsh that he will never forget. Stuart Broad overpitched outside off-stump and Marsh pounced with a powerful square drive. With the destination of the ball in no doubt, Marsh celebrated his hundred long before it reached the boundary. It was a moment no doubt made the more special by the roar of his home crowd he seemed to enjoy the moment almost as much as the 26-year old himself.

Allowing him his moment of celebration, Smith congratulated Marsh before urging him to bring his mind back to the job of helping him build a large lead for Australia. It will be sage advice not just for the remainder of this innings but those that lie ahead of him. Marsh needs to enjoy this moment of glory and the confidence it brings but he has merely shown he has the ability to bat six for Australia. It is only consistent reproductions of these efforts that will ensure that the number six position remains his.

If he can do just that, this innings at the WACA will be remembered as the moment Australia found itself the all-rounder it has sought for desperately since Freddy Flintoff stole the Ashes away in 2005.