The State of Origin period often proves the best time to confront teams like the Melbourne Storm as it proved again this year for Parramatta. With the Melbourne spine unavailable due to Origin duties, the Eels travelled to south and surged past a weakened Storm to further enhance their 2017 Finals prospects. 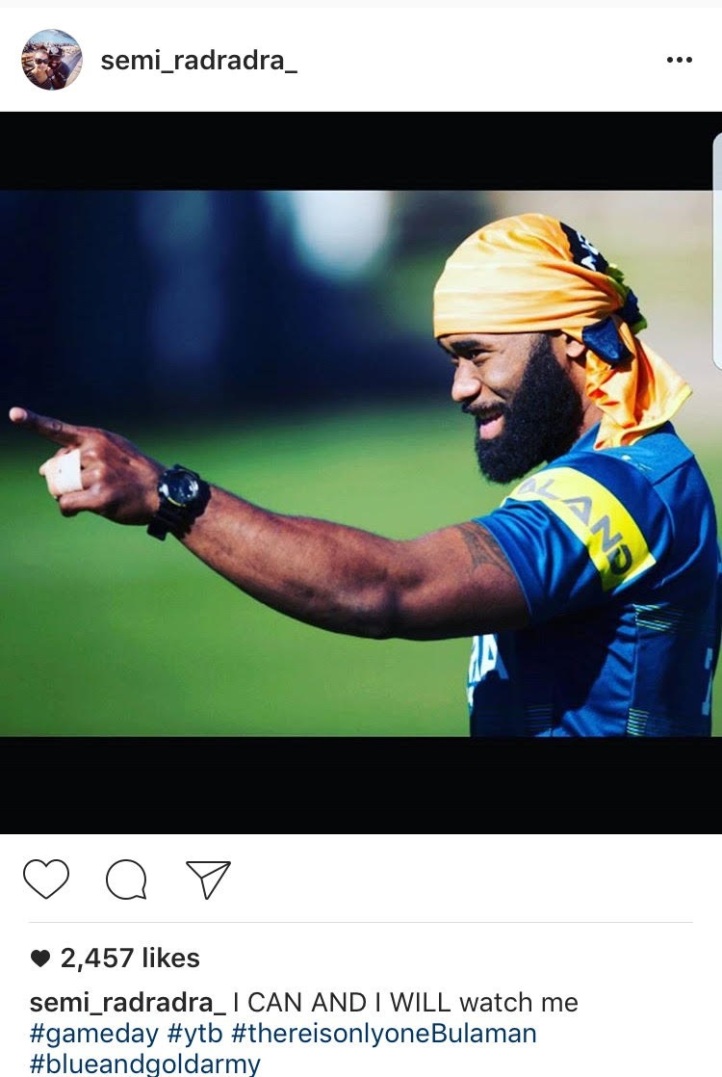 ‘I CAN AND I WILL watch me’
Even with this warning, shared on Instagram pre-game, the Melbourne Storm were unprepared for the onslaught Semi Radradra had prepared for them. Against the competition leaders, the flying Fijian was at his intimidating and exhilarating best.
In a scintillating opening 15 minutes, Radradra was called into action three times, two kick returns and at the end of a chain of passes, and each time he broke the line and rampaged down the lef thand flank for massive territorial gains.

Almost unstoppable, by full-time, Radradra had broken 10 tackles, scored a try and run for over 200 metres. It is the kind of performance that shows why the Eels are so keen to secure the former Kangaroos’ services once his sojourn in French Rugby ends.

Each week we are wowed by the speed, power and agility of wingers in the NRL. In a game containing Radradra, Suliasi Vunivalu, and Bevan French it was perhaps no surprise that we were in for some special moments from the men on the edges.
In the first half both Radradra and French displayed the kind of finishing we have come to expect from modern wingers. While both of the wingers’ tries were incredibly well constructed, it was tries to Mitchell Moses and Jahrome Hughes that displayed the incredible skill set of wingers in the 21st Century.

In remarkably similar scoring movements, both Hughes and Moses are both indebted to the efforts of their outside men. Hughes and Moses both the beneficiaries of pinpoint accurate kicks from their flying wingers. Bevan French for Moses, and Suliasi Vunivalu for Hughes, had remarkable presence of mind and skill to execute pinpoint accurate kicks for their team-mates while haring down the sideline.

In each instance the play was made to look almost effortless, such was the precision of the kick. The ease with which they completed their task belies the difficulty of it as there would be halfbacks in the 1980’s who would have struggled to replicate the action in space, let alone at full pace under pressure. French did produce a kick late in the second half that while frustrating his team mates, may have shown he may not have made it as a half back in the time of Sterling and Mortimer. 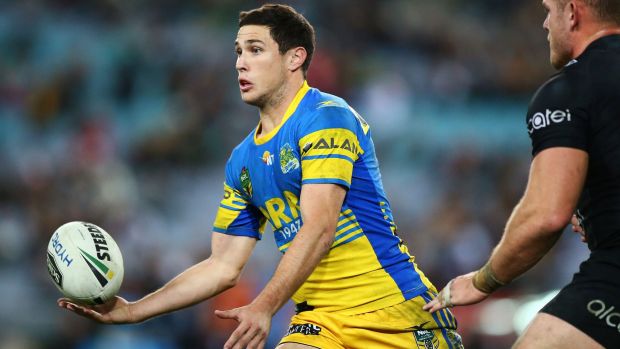 The story of Mitchell Moses’ 2017 season has unfolded like a story from the minds behind soap opera’s Neighbours or Home Away. His ‘will he or won’t he’ midseason move to the Eels was the subject of endless speculation. The volume of this speculation was then matched by the eagerness of many to find fault in the Parramatta’ big buy’s early performances for the Eels.

Seven games into his tenure in blue and gold and the signs are much rosier than some of the early negative reviews. Having settled into the structures of his new team, the young half has started to blossom in his new surroundings. Again against the Storm his kicking game was of vital importance to the team, with his ability to force repeat sets a key plank in the Eels’ ability to build pressure against the competition leaders.

His value has not only been limited to his kicking game, his passing and running game were on show against the Storm too. His ability to sum up the situation and make the right decision saw him involved in three of the Eels four tries. Scoring one himself he also created tries for Bevan French and Clint Gutherson with his deft passing. With five wins to show for his first seven starts for the Eels, hopes are high that his time in Sydney’s West will be fruitful for team and individual alike. 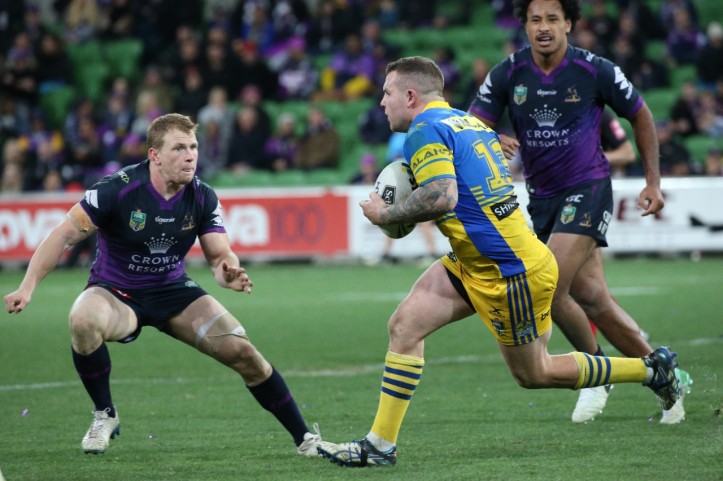 While Radradra and Moses are deserving of praise for their roles in the Eels’ hard earned victory, the result in large part is a result of the hard work of back-rower Nathan Brown. Parra Post-Mortem has dedicated much column space to the remarkable efforts of the former Rabbitoh and against the Storm he again showed why he deserves to be in the conversation for recruit of the year.

As he has done all season, Brown was yet again a one-man wrecking ball for the Eels. What Brown lacks in size he more than makes up for in heart and in an evening of intensity and effort, Brown led Parramatta in tackles (45), runs (25), and metres gained (201m with Radradra).

With Boyd Cordner in doubt for Origin 3, Brown’s name has quite rightly been thrown up as a possible shadow player for the Blues’ skipper. If he can maintain the level of form he has produced to date he will make it near impossible for Mal Meninga to leave him out of the Kangaroos’ World Cup squad at season’s end. 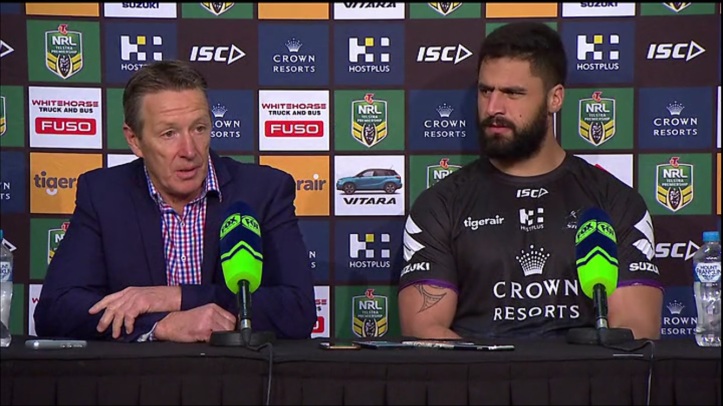 In an interesting post-script to the game Melbourne Coach Craig Bellamy showed that he doesn’t believe that living in a glass house should prevent him from throwing stones. “At times they were just laying on, laying on, laying on.” Bellamy told reporters at his post match press conference. “Having said that, good luck to them. They got away with it.”

Even allowing for his prefacing comments acknowledging that other club’s accuse his team of slowing down the play, this was an astonishing complaint from the Storm boss. Renowned throughout the competition as a man forever searching for new ways to slow down the ruck, his team professionally and consistently do just that each and every week of the season.

If this didn’t put these claims on shaky ground already, the fact that Suliasi Vunivalu was sin-binned for cynically preventing an Eels player from regaining his feet, should have done so. This is the crux of the situation though isn’t it, rather than an impassioned plea of a wronged coach, this is nothing more than second rate showmanship to divert attention away from a loss and perhaps influence future referees.

Whatever the reason for Bellamy’s unusual post match complaint, nothing can take away the significance of the victory for the Eels. After the uncertainty of recent seasons, sitting a game clear inside the top eight, Parramatta’s destiny lays in their own hands. With five of their last seven games against teams in the bottom half of the ladder, a return to the finals for the first time since 2009 is well within reach.