The Canberra Raiders have no one to blame but themselves for their 13-12 loss to the Brisbane Broncos. Many may look to the injury to Josh Hodgson, or the borderline incompetent scheduling, but the real enemy was in green last night. Poor last tackle options and astoundingly poor handling undermined their efforts in other areas, most notably goal-line defence and in their late game attack. An easier schedule faces the Raiders over the next month, and they cannot afford more hiccups like last night if they want to be well placed for September.

A full-strength side put the Raiders in the best place to compete, and in the first half a more careful approach to ball handling meant the Raiders completed 81 per cent of the opportunities with the ball. Impresario Josh Hodgson was again effectively manipulating the ruck to give his forwards the space to operate. While Junior Paulo (10 runs for 97m) and Shannon Boyd didn’t have massive numbers, it was in this part of the game they looked most effective. Clay Priest (8 for 68) was effective in the first 20 of so minutes of the game but wasn’t seen again. As he does done increasingly this season, BJ Leilua (14 for 154m) spent a lot of time operating as an extra forward, and his hit-ups are some of the most effective in the game, inserting momentum into otherwise staid sets.

But all this good work in the middle came to little benefit in the first half as a mixture of Hodgson’s overconfidence in his ability to create tries close to the ruck on the last, and some inconsistent kicking (and chasing) close to the line, led to failed forays. The Raiders failed to get to a kicking play at least 4 times, and on the rare occasions they did get to the kick were unable to turn it into more opportunities. This meant that the while the Raiders ensured they had good field position, they failed to garner any sustained periods close to the Broncos line.

This was compounded by slow line-speed, particularly in the ABC defenders close to the ruck. Too often the Broncos found easy metres in the middle of the park, particularly in the first half (their average set was a full 7 metres longer than the Raiders in the first half). It negated the Raiders strategy of trying to settle in the Broncos end of the park, and instead the game was played in the Raiders half.

The Raiders goal-line defence was exemplary, as it has been for most of this season. In the first half it held out the Broncos despite them spending a substantial period on the Raiders line, replete with what felt like an unending drip of repeat sets. The defence of the big boys is always improved when there is less room to move, but the defence of the spine continues to impress, with all members making important tackles on bigger, faster moving players to stop near-certain tries. And if you saw what Nic Cotric did then you witnessed unlimited talent and thanked the green gods that this young man was born in Cooma.

Unperturbed by the Broncos attack, the Raiders seemingly sought to up the difficulty in the second half. Instead of requiring the Broncos to do the hard work through the middle of the park, the Raiders piggy-backed the opposition up the field through untimely penalties and dropped ball. I counted 5 times they put the ball down coming out of their own half, 2 of which gave the Broncos the field position that they scored in the 43rd and 51st minute when first Bateman, then Aidan Sezer weren’t able to cover their defender from the inside.

Down 12-2 the Raiders attack upped a gear and began to focus their attack with bodies in motion around the edges. Leilua and Rapana were excellent when given the opportunity on the right, and the Raiders unleashed some impressive variations of their existing formations on the left.

Two plays will keep opposition coaches awake. The first didn’t result in points, but included Blake Austin running a line inside of Sezer on his normal movement to Josh Papalii on the left edge. This movement operates likes an option route – normally Sezer can choose to play Papalii on the face or out the back to Croker. Wighton normally runs a line between Sezer and Papalii to give the big man the option to play left to Croker or right to Wighton. The sheer number of bodies moving (and the people doing the moving) brings all the attention of the defence. In the first half this play nearly resulted in points for Croker and Wighton on separate occasions. This particular play in the second half saw Austin run a line on the inside of Sezer. The defence only just caught Austin, and was clearly caught by surprise. More opportunities to use this in the future will bring points because teams will have to choose between overloading on the Papalii/Croker/Wighton nexus or making sure Austin doesn’t scoot through before the ball even gets that wide.

The second play did result in points and was truly a thing of beauty and a joy forever.[1] In this play on the right, Whitehead and Wighton ran intersecting lines – Whitehead going outside in and Wighton going inside out. You can see on the picture below these interchanging lines force Tatua Moga to make a choice who to tackle. He does not get it right. 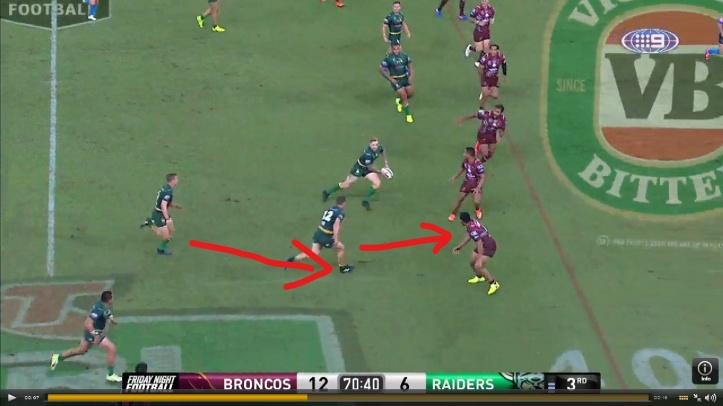 Blake Austin makes an excellent decision to hit Whitehead on the outside-in line, who makes a brilliant pass to Wighton who finds Austin in support. It was art. It was science. It was precision execution and flair at the same time. Even in the cold-morning after of a loss, that play makes me warm.

After the success they were having attacking the Broncos edges in the late second half, you can almost forgive the Raiders for failing to get into position to kick a field goal. To be honest, it seemed like they were more interested in winning the game than playing golden point, and given their success can you blame them? The ‘mistake’ of not getting into position to kick a 40+ metre field goal didn’t upset me as much as the 5 dropped balls in our own half did.

And so the Raiders find themselves in a hole. A shallow hole but a hole nonetheless. They’ve faced three legitimate contenders over the first month of the season and failed to take points for a win off any of them. It’s early in the season but at 1 win from 4 games, the Green Machine must click into gear over the next month as the schedule gets more manageable.

It must be noted that this time last year the idea of taking both the Cowboys and the Broncos to field goals in their home grounds would have shocked the most ardent Raiders fans.  But this team is the real deal, and that makes the self-sabotage even more frustrating. The Raiders have a full week to recover and set the course again. They know what they have to fix. We’ll see if they can get out of their own way.