Raiders Review: Should We Be Worried?

Pulling meaning form the debris following the Canberra Raiders 44-0 destruction at the hands of the Newcastle Knights yesterday is difficult. Was the performance merely a function of the nature of the game? Or is there something more substantial at play here? In short should we, the legion of Raiders fans, be worried?

The context for yesterday’s game is important. For the Knights this season is about showing they are a genuine first-grade side again. Starting well in trial games is important to build a culture and platform of success after last year’s hellscape. So they named a proper side and turned up to play. The Raiders named 32 players and turned up as the darling of the media, expected to win by more than 30 by some prognosticators.[1]

The Knights showed their enthusiasm in defence, holding on repeated sets on their own line early. The Raiders attack was led ably as per usual by Josh Hodgson. They were unable to break through the line in the early going (although Eddie Aiono did go bomb a try) but earnt more opportunities through intelligent kicks from Hodgson and later Aidan Sezer. Many of the ‘greatest hits’ from last year were rolled out in the red zone: Hodgson working with two forwards on each side of the ruck; Austin and Sezer sharing the same side of the field to give the former more space to run; and that infernal hooker-prop run-around.

That there was nothing new here is likely because the connections with outside backs that operated off both back-rowers last year[2] were not used due to both lack of personnel and to hold those bullets for when the fighting really begins. The only shining light here Newcomer Nic Cotric looked powerful and quick, and should start in week one ahead of the less impressive utility Jordan Turner.

In the leadup to these sets Shannon Boyd showed his time spent with the Australia team was well spent. He looks trimmer this year and has lost none of his trademark power. This was encouraging for the Raiders. As to was Hodgson’s work around the ruck. His ability to really convince oppositions he is going one way before sending the ball to the other is so critical in buying his forwards an extra step of space before contact. Other forwards were less successful. Routinely the Raiders only made 30 or so metres in their sets as forwards were monstered in the ruck and unable to get any momentum in sets. 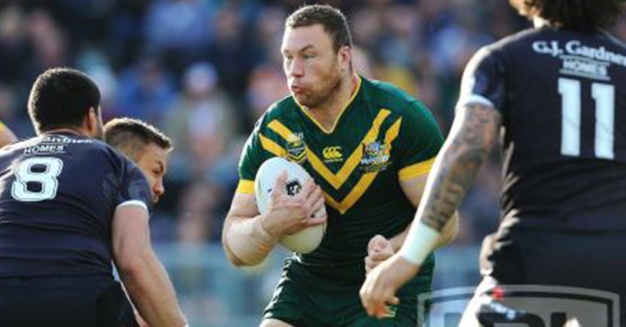 Ultimately, the attack’s insipidness was not worrying. Too many weapons unavailable, too many cards held close to the chest and too few minutes played by senior squad members were more likely to blame for the lack of points. Hodgson is still elite. The return of the first-choice backline will bring back the athleticism and connections outside of the first-receivers. The attack will be fine.

But oh the defence! Surely heavily influenced by the lack of enthusiasm the first-grade forwards felt about playing a trial game, the Raiders allowed the Knights to easily make their way up the middle of the park throughout the opening passages of the game. 60 plus metres were made easily, and the Raiders first-string middle-forwards were made to look slow off the line and weak on first contact.

Then when the Knights reached the attacking zone they repeatedly attacked the Raiders dreaded right-side defence, a place that has been a problem since Terry Campese’s last season. Without BJ Leilua to provide Blake Austin with physical support, the Knights found it easy to send backrowers and big backs through that region, creating the missed tackles they needed to acquire points.

These flaws were more worrying. While one hopes that the lack of competitive fire that a trial brings was largely to blame for the forwards defensive performance, it cannot be assumed it was so. The Raiders successful second-half of the season in 2016 was driven by defensive success in the middle of the park. Oppositions with elite forward packs defeat the Raiders by being able to overpower them and move them around more than they like. If the small but nimble Knights pack can have such easy yards, the more elite pack the Raiders will face in round one in Townsville could spell disaster.

In regards to the right-side, we hope the return of Leilua, along with more prominence of Whitehead will lessen the load on Austin. He’s never been an elite defender and his lack of physical stature means he will remain a target for oppositions all season. This is a sore-spot the Raiders will need to pay close attention to, less it become a mortal wound.

The Raiders did not take the game seriously yesterday and paid the price. They are the media darlings – or at least were – prior to yesterday. They have a massive target on the back. They will surprise no one this year, which is why every game will require elite performance. Coach Stuart has a plan and may have been holding that back for when the games count. And as always, we have to remember that trial games do not matter. But if they are anywhere below their best what happened yesterday will no longer be remembered as ‘just a trial’ but instead a harbinger of disappointment.

[1] We are focusing most of our assessment to the first 20-30 minutes of the game. After that point it was Newcastle against Mounties.