When Steve Smith sat down for dinner on Day 3 of the First Test at the Gabba on Saturday, he must have done so a contented man. Having watched his team dominate Pakistan for two and a half days, he had just invited his opposite number Younis Khan and his team to chase a world record target of 490. Only a night earlier he had seen his team flay the Pakistan batting line up like a hot knife through butter. Victory wasn’t just assured but possibly only hours away. 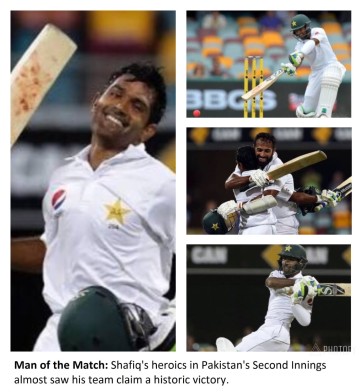 Only a day removed from a performance slammed by many as being careless and lacking fight, the visitors confronted their monumental second innings task.

Showing remarkable grit, dare and determination, Pakistan refused to accept the notion that their innings would end in certain defeat. For 145 weird, wonderful, and gripping overs they survived all that the Australian attack could throw at them. Behind a Man of the Match performance from Asad Shafiq, who posted his 10th Test Match Century, Pakistan dared to dream. What began as an exercise in stubborn resistance became an unlikely quest for victory on the final day as the visitors found themselves within touching distance of history.

The lucky few who made their way to the Gabba on Day 5 were treated to an enthralling conclusion to the contest. The fact there was a Day 5 at all was a surprise to the Umpires who ordered an extra 8 overs the night before because they expected it to be long enough for the Aussies to claim victory. Like a tennis player having survived match point, the visitors continued to play their way back in to the game. The Australian’s growing ever more frustrated, powerless in stopping the pendulum slowly swinging in Pakistan’s favour as Shafiq continued his obstinate stay at the crease.

With partner Yassir Shah, Shafiq helped Pakistan claim a number of records. Their 71-run partnership meant the visitors became the first team with 50-run partnerships for the seventh, eighth and ninth wickets. In passing 400 they became the first Pakistan team to do so in the fourth innings of a Test Match. When they reached 450 it was the highest ever fourth innings total in a Test Match in Australia and the equal third highest in the history of Tests. It was at this point they also closed within 39-runs of Australia, only five sides having gotten closer to victory chasing 400. 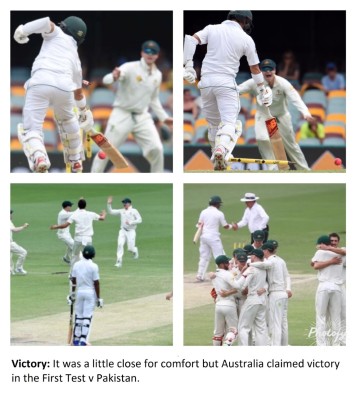 Unfortunately for Pakistan it was here that their record breaking efforts would come to an abrupt end. Aussie Captain Steve Smith, officially the world’s most relieved man, his run out of Shah completing a dramatic victory for his team. In the end, despite the visitors last innings heroics, it was a victory well deserved by the home team. While there will need to be a thorough review of some of the tactics in the final days, a win is a win and there is a great deal of positives for the Australian’s to look back on too.

A month after the team surrendered meekly to South Africa in Hobart, the Australian’s are resurgent. Two Tests don’t make a summer but the Australian Selectors decision to finally select talented in-form players has paid early dividends. In Matthew Renshaw and Peter Hanscomb they have seemingly discovered two young players undaunted by the pressures of Test Cricket. Maybe it is the invincibility of youth but it seems Renshaw, the ever-smiling, baby faced Queenslander, is hardly daunted by much at all. Hanscomb, his fellow debutant in Adelaide, is batting with surety of a man with many more than two Test caps to his name. 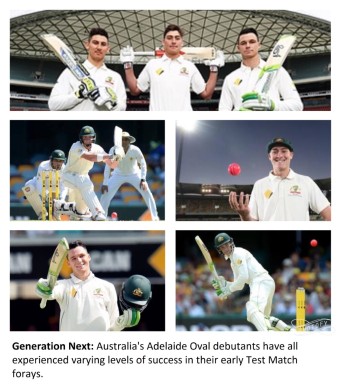 For Nic Maddinson, the transition to Test Cricket hasn’t been anywhere near as seamless. His impressive Sheffield Shield form, where he has posted two centuries and two eighties this season, has not translated to the elite level of the game. Visibly nervous at the crease, the New South Welshman has a return of only five runs from his three trips to the middle of the Test Match cauldron.

As Australia chased quick runs in the second innings, Maddinson found himself in the invidious position of batting with an intended declaration only two overs away. It was heartening that he continued the chase despite knowing that another failure could be the end of his Test Career after scores of 0 & 1. In what appeared to be a reprieve, the selectors named an unchanged squad for the Boxing Day Test. However comments from Smith in the post match, and the later addition of West Australian All-Rounder Hilton Cartwright to the squad, appear to indicate that Maddinson’s time with team may be over for now. 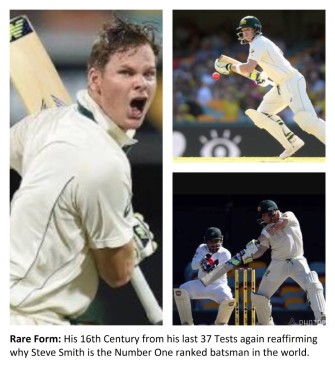 Exciting as it is to see the youngsters find their feet, the unbelievable run of form of their skipper is a rare delight. Against Pakistan the skipper yet again showed why he is the number one batsman in the world, ahead of luminaries like Virat Kohli, Kane Williamson and Joe Root. His First Innings century spectacularly laced with stroke play was equal parts arresting and exhilarating.

Despite their difficulties in dismissing Pakistan a second time, the first innings again showed why our bowling attack has been a shining light throughout our recent struggles. The opening partnership of the vicious pace and swing of Mitchell Starc and the reliable Josh Hazelwood is on the fast-track to discussions of great Aussie bowling pairings. Complimented by Jackson Bird and Nathan Lyon it is a formidable attack. With James Pattinson and Pat Cummins soon to be available for selection again it is an embarrassment of riches bound to cause the selectors countless headaches.

A record non-Ashes Test Crowd at the venue, high ratings and an electric atmosphere would suggest the Gabba’s First Day-Night Test was a resounding success. The true value will be realized in years to come with the game now more accessible to those who work regular business hours. Despite next season’s Ashes Test returning to the traditional times, I would expect to see more Day-Night Tests at the Gabba in the future. From a fan viewpoint it is a no-brainer and the tide of discontent within playing ranks is slowly turning. Many are of the view that one in Adelaide a year is enough, I personally feel that two is the right number. 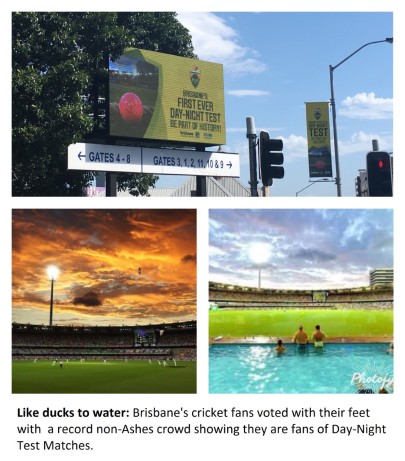 With confidence high in both camps they each turn their attention to Boxing Day and the biggest day on Australia’s cricketing calendar. Pakistan looking for their first victory in Australia since 1995 and the Aussies keen to extend their current win streak to three.