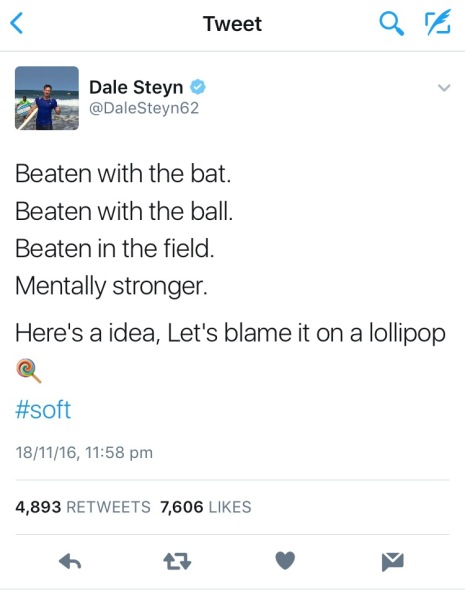 With that, a recuperating fast bowler ignited an otherwise benign story into the ‘scandal’ that is the ‘Storm in a Lollybag’. Like much that has been written on the subject Dale Steyn’s tweet, is full of indignation and red herrings.

For those of you who are not aware – congratulations by the way – South African captain Faf Du Plessis was summoned by the ICC to answer a charge of ball tampering. The charge was laid after video footage emerged of the skipper transferring saliva from his mouth, containing what has been described as a ‘mint’, to the cricket ball.

The maelstrom that followed has been truly ridiculous.

We’ve seen everyman and his dog becoming instant experts on the effects of sweet residue on a cricket ball. There have been indignant responses, likening the charge to April Fool’s Day pranks from Proteas elder statesmen. Conspiracy theories’ suggesting the charge is either Australian sour grapes, or designed to redirect attention from an insipid Australian performance. All topped off with the theatre of security guards forcibly removing reporters from the vicinity of the mint loving skipper. 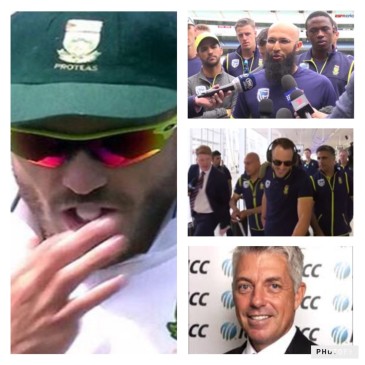 A bit like the driver who cries about revenue raising after receiving a speeding fine, most of the resultant noise surrounding ‘Lollybag-gate’ has missed the point. Steyn’s tweet was the first in a conga line of reaction where the charge was explained off as some kind of attention diverting conspiracy.

While Steyn tried without conviction to suggest we all misunderstood his tweet and he ‘in no way blamed the Aussies’, the horse had already bolted.

Journalists from Johannesburg to Durban giddily and self-righteously told the Australians they should worry themselves more with how to play out-swingers than Du Plessis’ favoured choice of breath mint. The fact that the Australians were instead busily learning each others’ names and had no time to be bothered with the mess the Proteas leader found himself in was inconsequential.

In a show of solidarity, reminiscent of the Melbourne Storm’s salary cap response a few years ago, Hashim Amla fronted the press with each of his teammates behind him. The veteran first drop, as composed in this setting as he is facing Mitchell Starc thunderbolts, was quite strong in condemning the charges against his captain. “It’s not April, but the allegation against Faf was…a really ridiculous thing. As a team, we’re standing strong, we’ve done nothing wrong. It’s basically a joke.”

Amla is incorrect when he claims “they’ve done nothing wrong.” A player is not able to apply a foreign substance to the ball and a breath mint, whether rubbed directly or indirectly, is a foreign substance. The bearded wonder bat is correct though when he says this is a joke. In my mind, ball tampering should be little more like what Du Plessis was convicted of in 2013. In that case he actively rubbed the ball against the zipper of his pant to damage the ball.

Suddenly, and not surprisingly, every reporter in Australia wanted a quote from the visiting skipper. Team management rightly informed media outlets that their man would not be making any comments until the matter was resolved by the ICC Tribunal. Somehow, despite being a touring team well versed in media relations, Proteas management were caught by surprise when this directive effectively became a red rag to a bull. More desperate for their pound of flesh the press stalked Du Plessis through the airports of Australia, their questions and fluffy microphones eventually spooking a security guard into physically removing the press men from the skipper’s vicinity. A situation that was inflamed when rather than address the excessive response from their security guard, the South African camp again attempted to play the victim card. The heavy handed response was justified, in South African eyes, because the press had not taken heed of the notification that Du Plessis would not speak with them. 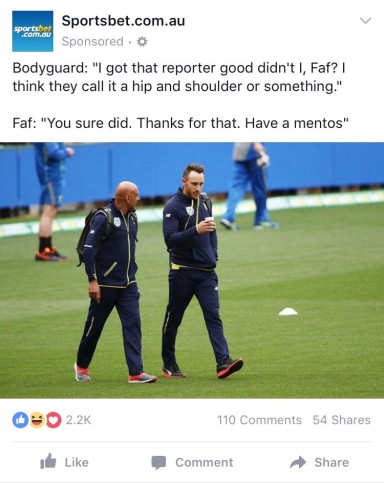 In the end, the South Africans were no doubt astounded when the ICC were unmoved by Du Plessis’ protestations of innocence. In the end the panel remained convinced that a foreign substance had been transferred to the ball in contrivance of Article 2.2.9. As the law stands, despite South African protestations otherwise, it’s hard to argue with these facts. A mint remains a foreign substance whether you apply it directly, or indirectly, via your mouth.

Du Plessis’ penalty was considered a first offence by the tribunal and as a result he was fined his match fee but not suspended. I hear your questions, first offence, didn’t you tell us he was convicted of ball tampering back in 2013? Yes he was but, in another example of lunacy, because that offence was prior to the laws revision two years ago it doesn’t count.

So after all of that, Du Plessis will take the field in Adelaide. He may be a little lighter in the hip pocket but has the opportunity to appeal. With his continued protestations of innocence, this may well be an avenue he may pursue. However, before starting down this path he might be wise to review ICC Chief Dave Richardson’s thought’s on the matter. When asked, Richardson suggested it was a “pretty obvious” case of ball tampering.

Those lost in the moment have questioned whether this may overshadow the on-field performance of the touring South Africans. I cannot speak for everyone, but for this correspondent, a question of sweet residue will be forgotten easily, but the complete dominance of the Proteas in this series will be remembered for many years to come.