A Brief History of the Premiership Cup

Late on Saturday afternoon either Easton Wood of the Bulldogs or Keiran Jack or Jarrad McVeigh of the Sydney Swans will be presented with the iconic AFL Premiership Trophy. For many of us this tradition seems as old as any other in the game but in fact it is a relatively new, with the first Cup awarded in 1959.

Sir Kenneth Luke, the VFL President, was the driving force in this recognition for the Premiership team. After seeing the spectacle of the FA Cup Final at Wembley and watching the winning team receive the trophy at the conclusion of the game, he was determined to bring something similar to the Australian game.

Famously, to ensure that the size of the Cup would allow it to be seen from all corners of the MCG, Luke had his assistant cross the road from Luke’s office and run a lap around a neighbouring park. From his elevated position on the other side of the road he could see the prototype clearly, and the size of the Cup was decided.

Each Premiership Cup weighs about 6kg, is silver plated on the outside, gold plated on the outside and are conservatively valued at $7000. Cash’s have made each Cup awarded and takes their skilled technicians approximately 90 hours to complete with manufacture commencing in May each year.

The first presentation in 1959 was far from the extravaganza that is today. Melbourne’s captain followed a pre-game directive to be ready to receive ‘a lasting memento’. Walking 20 rows into the members stand he shook hands with Victorian Governor Sir Dallas Brooks, accepted the Cup, turned around and returned to his team’s celebrations.

One of the great new traditions of the Premiership Cup presentation is the announcement of a club legend from each of the competing clubs to hand over the silverware. Since 2004 a number of the games’ greatest names have honoured in this way. 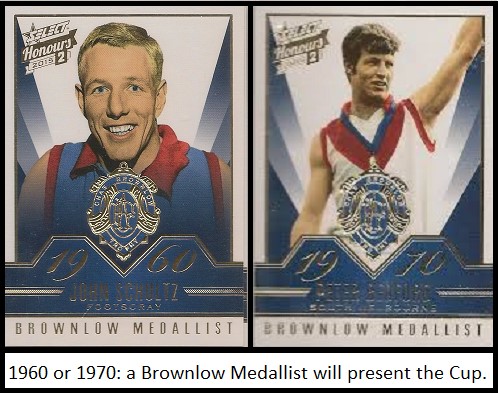 This year the AFL have announced two Brownlow Medallists as the men to present the Cup if their team is successful on Saturday. A Bulldogs victory will see John Schultz award the prize and Peter Bedford will do the job if the Swans prevail.

1960 Brownlow Medallist John Schultz was a member of the 1961 Bulldogs Grand Final team, the last to grace the big dance before Wood leads the team out on Saturday. A five time Best and Fairest, he was an inaugural inductee of the AFL Hall of Fame and back pocket in the Bulldogs Team of the Century.

Bedford, the 1970 Brownlow Medallist, has an almost identical CV to his Bulldog counterpart. Ruck-Rover in the Swans Team of the Century, Bedford is also a five time Best and Fairest winner for South Melbourne and was inducted into the AFL Hall of Fame in 1999.

Other presenters on the big day will be: 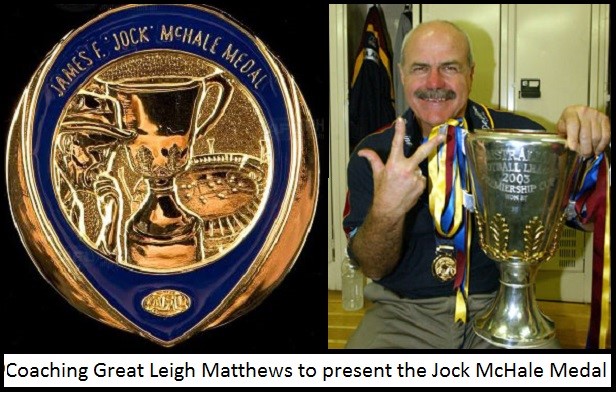 The Jock McHale Medal will be awarded to the winning coach by 4-time Premiership winning coach Leigh Matthews. ‘Lethal’ was an inaugural Legend in the AFL Hall of Fame and considered one of its greatest ever coaches.

The Norm Smith Medal will be awarded to the man adjudged best on ground in the Grand Final by 1999 Winner Shannon Grant. The former Swan and Kangaroo won his medal on the back of a 4 goal display in the Kangaroos Premiership win.