On Monday, under the headline ‘Fix Giant Scandal’ Mark Robinson, the Chief Football Writer for the Herald Sun, passionately set forward a case for Geelong to host a Prelim Final. ‘Deals are in place, but the cost is the integrity of the finals series. If the Giants get a home prelim, why shouldn’t Geelong?’ he asked. ‘It is rubbish, embarrassing for the national sport, and if AFL Chief Executive Gillon McLachlan loves football as much as he says he does, his next endeavour surely has to be to fix this scandal.’

Later in the day Geelong Chief Executive Brian Cook lent his voice to Robbo’s outrage, “We think if it’s good enough for GWS down at Spotless, it’s good enough for us down at Simmonds” he told radio station SEN. He later added “We don’t think there’s an excuse for us not to host a final if we deserve one and earn it.”

While you can read my condemnation of the NRL for its position in relation to Canberra hosting a Prelim Final here, and noting that I love kicking the AFL as much as the next man, I disagree with Robinson and Cook on this  matter.

In two weekend’s time Geelong will host either Sydney or Adelaide at the MCG, one of the venues at which Geelong play home games. Even if this was not the case, the venue would still represent an advantage for the men in blue and white stripes considering their opponent would have required an interstate flight to oppose them. 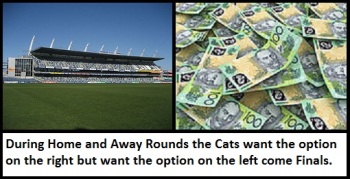 Cook’s comments indicate that the Cats don’t believe this advantage enough of a reward for their home and away efforts.

I find this interesting because they are more than happy to give up an advantage over fellow Victorian sides in the nature of commercial interest.

Or in other words playing a final against Adelaide or Sydney at the MCG is a horrible imposition but playing their home games in Melbourne against Hawthorn, Collingwood, Carlton or Essendon is not. The four clubs may actually need reminding where Skilled Stadium is, because rather than seek an on-field advantage over these teams, the Cats prefer to seek extra bums on seats in Melbourne and the extra dollars that go along with it. The Hawks have not had to travel down the freeway for 10 years, Collingwood 17, Carlton 19 and Essendon 23 years. To put that in perspective, Fitzroy have played at Skilled Stadium since Essendon last visited.

They won’t be reaching for the Melways anytime soon though; it seems the Cat’s demands for Finals in Geelong doesn’t seem to apply to these clubs. “I think we would still probably need to play them in Melbourne” Cook suggested when pressed by SEN.

Robbo also suggest inconsistencies in the way the League’s Finals scheduling of its Sydney clubs. “The AFL made Sydney play Greater Western Sydney at ANZ Stadium to maximise the attendance but then announced the Giants would be playing a home preliminary final at Spotless Stadium, which has a 24,000 capacity.”

This is a little bit of outrage for outrage sake. Although not the Swans home ground, they were much more acquainted with the Olympic Stadium than their opponents. Sydney having played Finals at the ground on 3 times as many occasions than GWS had stepped foot on the ground at all. This fact, combined with 60,222 people attending the game, makes the decision the right one. As for the Prelim Final being scheduled at the 24,000 seat capacity Spotless Stadium, when you consider that GWS have an average crowd of 12,125 this again is the correct decision by the league.

I believe this is a telling point. In what is effectively a double whack St Kilda, unlike Geelong, are not afforded the right by the AFL to pick and choose who they play at home and who they play at the MCG, effectively a double whack. Despite continual requests to play more games at the MCG to take advantage of the venue’s better commercial terms, St Kilda are required to ply their trade at Etihad Stadium. Then when the games matter most, they are required to give up a competitive advantage to clubs that they are required to concede a financial advantage to during the season.

18 teams each playing 22 games means the AFL Premiership Season is conducted upon a number of compromises.  More compromises are required because commercial interests, e.g. showdowns and derbies, Broadcast rights and contracted minimum numbers of games at stadiums, take precedence over fairness. This leads to situations that clubs rightfully take umbrage at, but in my mind at least, when you are happy to buy into the situation and trade your advantages for dollars in certain situations you have sold the right to complain about your advantages being sold away by the League.