Adams Goodes keeps getting booed this season and after twice being the very public victim of racist remarks in 2013 argument over whether this booing is racist or not continues to rage. 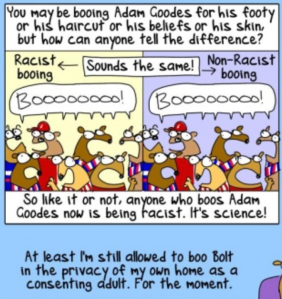 Racism is bullshit. Whether it’s in the media or at the football, racism is bullshit. As a white guy who lives in Melbourne I’m often surprised how often I encounter it in my day to day life. A 13 year old girl and the often progressive Eddie Mcguire showed racist remarks can come from the most unexpected of places. In those instances Goodes took an impressive stand in condemning the comments made. It’s easy to disagree with extreme racist views. It’s harder to challenge a young 13 year old girl at the football or a “slip of the tongue” by a respected media celebrity. Fast forward a couple of years and the shadow of those controversies have lead to much speculation and outrage as to why Goodes is being booed today. 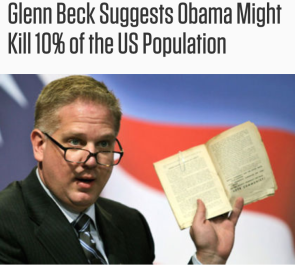 It’s easy to get outraged by comments on social media. 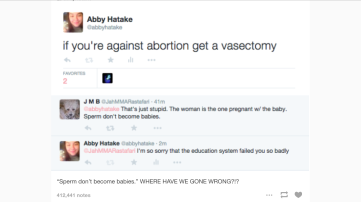 And it’s really easy to get outraged at the football.

A lot of the time these things are trying to make us outraged, make us care and get our attention. Booing and outrage is a big part of what makes footy such an engaging and unique experience. But it’s a unique thing. It’s not meant to be a nice place. But it can’t be a racist place either.

My dad would say to me when I was little “We don’t boo and swear at the footy, but other people can if they want, and that’s their decision and you can decide when you’re older”. For me booing, swearing, heckling, sledging, celebrating and arguing are all accepted parts of the combative and vibrant football game experience. The diversity of football fans and players at games means people often have different views on what is socially appropriate, but for the most part, at the football, people tend to work it out together and co-exist. And that is a great thing. Ultimately it brings people together in it’s own way.

News and social media also draws in all sorts of people. It also thrives on outrage and conflict. But the social boundaries in this domain are much more likely to be stretched and broken than they are at a football game in my experience.

We read how the booing of Adam Goodes means Australian football fans are racist.

We read how Goodes bullied the 13 year old girl who called him an ape and violently threatened Carlton fans with an imaginary spear during a post goal celebration.

We read how Hawthorn supporters boo more than other clubs because they are wealthy and entitled and resent Adam Goodes for representing impoverished indigineous Australians.

I don’t think any of these views would be expressed or tolerated at an actual game.

When I worked on cruise ships I played with a soul singer from New Orleans. The singer was a real Alpha guy who loved the Saints and loved wearing his Reggie Bush jersey. I remember one time I was drinking with him and some other guys and he was getting given a real hard time about how bad Reggie Bush was playing that season. Fed up he quietly said in one guys ear “Don’t be hating on Reggie Bush just because he’s black’. This guy jumped up and his face immediately went from joking around to deadly serious.

I remember him saying very loudly “don’t come at me like that” and the whole bar, which was usually pretty raucous went quiet like a fight was about to start. The singer sat silently and you could see he was hoping if he didn’t say anything else it would just end there. The whole bar was watching. In a lower voice but speaking very emotionally the guy then said “You can’t come at me like that. That’s not right. Saying I’m racist (he stuttered when he said racist). You need to apologise.”

The singer sheepishly just said “I’m sorry man” and then both men left and that was that.

A lot of the Adam Goodes articles of late have made me think of that story. If you were sitting at the MCG would you call someone booing Adam Goodes a racist? If you met Adam Goodes would you accuse him of trying to start a race war?