BY BOZZA AND SPYRO

Week 6 of the A-League saw the Central Coast Mariners end Sydney FC’s undefeated start to the season amidst euphoric scenes in Gosford. After finishing at the bottom of the standings last season, Newcastle continued their meteoric rise this season and claimed ownership of top spot on the A-League ladder. While Melbourne Victory and Brisbane Roar’s painful starts to 2017-18 continued, their draw at Etihad Stadium meaning both teams remain winless this season.

Learned – Central Coast’s patience is starting to pay off. 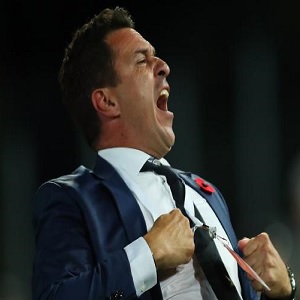 Patience and persistence with Paul Okon and the Central Coast Mariners has finally begun to pay dividends. Unlike many European League’s where knee jerk reactions are prevalent with coach’s sacked after 4-5 games of bad results, the Mariners have given Okon time to implement his structures and strategies in Gosford. The first payoff for this patience came on Friday night when the Mariners knocked off Champions Sydney FC.

The victory prompted celebratory scenes amidst players, coach’s and fans alike. While the ‘fun police’ questioned the appropriateness of the team celebrating the win so vociferously, The Sportress was happy to see Paul Okon and co wildly singing along to Horses and enjoying their victory. Let’s hope they kick on from here and take their season to the next step.

Last season’s wooden spooners Newcastle now sit atop the A-League. Coach Ernie Merrick has the Jets playing an exciting brand of football which has seen the team record an undefeated start to the new season. Despite losing Marquee signing Ronald Vargas, the Jets haven’t missed a beat.

On Saturday at Coopers Stadium, they had to overcome a sluggish start and a hostile crowd to claim the three points. Two goals either side of half time saw Newcastle take a lead they would not relinquish as they held on for a 2-1 victory. Coach Ernie Merrick could have had a more comfortable time of it, if marksman Roy O’Donovan could have converted a gilt edged opportunity laid on for him by Andrew Nabbout. Given the former Mariner’s hot form this season, it was an unlikely miss but nothing could take the gloss off another strong performance from the Novacastrians. Coach Merrick doesn’t waste smiles easily though, so don’t expect the Two Time Championship winning mentor to replicate Paul Okon’s celebrations any time soon

Adelaide started the season so strongly and looked like they had so many weapons on the field and on the bench.

Unfortunately,  it seems once their Australian born Turkish international Ersan Gülüm went down injured they haven’t been able to get a win and have been quite poor.

United CoachMarco Kurz will be hoping his star defender can return sooner rather than later and he can tighten up Adelaides defense and hopefully they can start moving up the table.