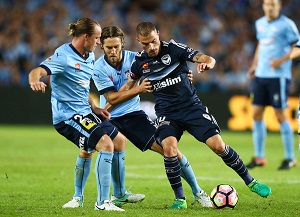 Another chapter in the storied rivalry of the Big Blue will be written when Melbourne Victory and Sydney FC clash for the first time since last seasons epic Grand Final. International duty has robbed us of a number of the key players for this clash but what it might lack for star power it won’t lack for passion and intensity. Kevin Muscat and Graham Arnold, the teams coaches and former Socceroo team mates, have already taken a few shots at the other in the lead up to the match and you can be sure that both squads will be in no doubt about the importance of the clash, which should make for must see viewing for all football fans.

It is fair to say that these two sides are well acquainted with each other having met each other in four matches last season. Sydney won all four encounters last season, but did require a penalty shoot out in the Grand Final to complete the quadrella. For the Victory they have to look back to Australia Day 2016 to find the last time they took all three points against their Big Blue rivals.