Saturday night at Etihad Stadium loomed as a season-defining game for St Kilda as they prepared to play a top 4 opponent in front of a big crowd. In a scintillating first half, the young Saints showed the football world that they are a genuine contender to play finals for the first time since 2011. 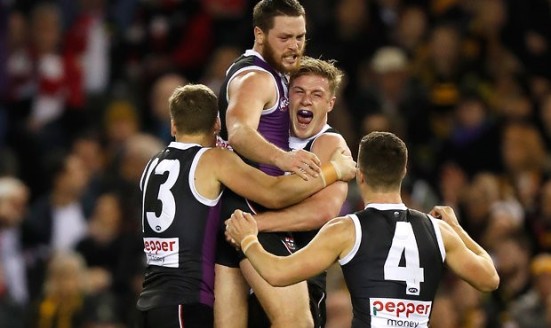 When the Saints left the field at half-time to a standing ovation from their long-suffering fans, it would be fair to say that Richmond would have had no idea what had hit them. St Kilda had ambushed their opponents and their dominance was reflected in every measurable of the game.

The Saints almost doubled Richmond’s possession count 248-142, dominated contested possession 84-55, almost had exclusive control of the clearances leading 23-9, which was a key factor in the extraordinary inside 50 count of 43-14. It was without question one of the best halves of football from the team in a very long time and it was a well-deserved 14. 8 (92) to 1. 4 (10) lead.

The Tigers had wilted under the sheer ferocity of the Saints attack on both ball and man. The Saints were manic, with and without the ball, leaving the Tigers no time or space in which to operate. It was the most ferocious of onslaughts, and the second quarter became one-way traffic as a result.

The midfield contest to which Richmond, brought Dustin Martin and Trent Cotchin and high hopes, was convincingly won by the less heralded St Kilda midfield. Coach Alan Richardson sent his two stars, Seb Ross and Jack Steven to the Tiger duo with the responsibility to contain on top of their regular ball winning ways. The dual roles were completed to the letter, Cotchin and Martin’s influence reduced to almost insignificance as Ross and Steven combined themselves for more than sixty possessions.

On a night dedicated to his sister, and with St Kilda not wearing red on their jumpers for the first time in their history in her honour, it was fitting that Nick Riewoldt was an imposing presence. Wearing the unfamiliar colours of purple, white and black, with St Kilda replacing red for the Riewoldt produced a performance that St Kilda fans are well accustomed to. Opposed to Alex Rance, the games’ pre-eminent defender, the 331 game veteran produced a master class. Displaying his renowned endurance he claimed 12 marks and, in doing so, the all-time AFL record for marks taken.

If Riewoldt’s performance was familiar, there are some unkindly suggesting that Billy Longer’s was surprising. Surprise or not, it was definitely timely with Jason Holmes and Tom Hickey starring for Sandringham in recent weeks. They will need to toil away in the VFL for a little while longer after Big Billy produced his best game of the season. Longer dominated the ruck contests consistently providing the St Kilda midfield first use of the ball but it was his work around the ground that was most pleasing. The 24-year-old was able to collect 11 disposals and bring down four marks but his highlight moment occurred in the middle of the Saints’ second quarter goal spree. Although clearly not confident, the big ruckman was able to kick truly from 40-metres out to score his 3rd career goal. The successful shot wasn’t enough to tempt him to take a shot from similar distance later in the game, instead finding a team-mate with one of his nine handballs for the match.

Due to his team’s dominance, Jake Carlisle was not called upon often in his 100th game but was able to take a number of strong intercept marks. At the other end of the ground it was a much different story with key forwards Tim Membrey and Josh Bruce scoring heavily. Unfortunately for Bruce his radar wasn’t as accurate as usual with the former Giant kicking 2.5, including two behinds that he would rather not see on replay. Tim Membrey’s was blemish free in front of goal, kicking five goals for the night. A clumsy contest in the second quarter, means that it will be a few weeks before Membrey gets his next chance to exploit his rediscovered form.

That they were unable to maintain the onslaught for the second half should have come as no surprise and should not take any gloss off their victory. When the final siren sounded, it was a resounding 67-point victory providing a percentage boost, and enhancing the Saints’ claims for a berth in the Finals at season’s end. Four straight victories sees the team full of confidence and in the eight with seven games to play. In a season that sees just one game separate fourth and ninth, the Saints’ position is far from secure but their destiny rests in their own hands and that is a good place to be.