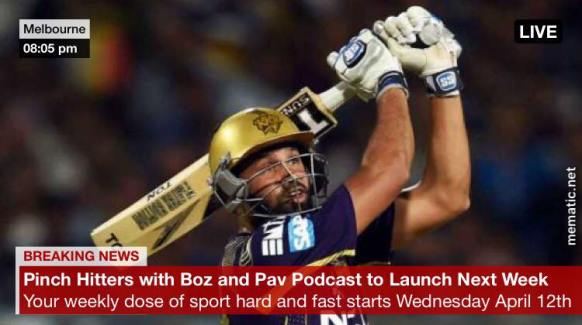 On Wednesday April 12th, The Pinch Hitters with Boz and Pav will be excitedly launched into the Podcasting world by me and my old friend Pav. We look forward to sharing our unique take on the news and view from the grandstand side of the sporting world. The Pinch Hitter moniker is not one earned by spectacular feats of willow wielding by either of us but more a respectful nod to a way of thinking.

Cricket is one of world sport’s most strategic contests. Whether contested over twenty overs or across five days, the opposing captains spend the time striving to manufacture an edge for their team. One of the more exciting maneuvers is when the skipper modifies their teams’ batting line.

Whether by hunch, accident, design, a response to the elements, or a little bit of each, the decision to shuffle his team’s batting order can completely alter the momentum of a match. It can be a highly attacking move with a batsman given a license to chase quick runs. It can be completely defensive where a less capable batsman contends with a tricky situation so that those more capable can flourish within better circumstances.

Whatever the reason there is a thrill in watching a captain’s bold move play out, the result of the match, series and sometimes even careers hinging on the result. Today we look at five of the most famous and successful instances of the shuffle in the long history of the game.

When the cricketing world converged on Australia and New Zealand in 1992 to contest the fifth installment of the ICC Cricket World Cup, the 50-over game was contested a little differently to how it is today. Rather than taking advantage of the fielding restrictions of the opening 15-overs to hit over the top, Openers in ODIs approached the opening overs with a similar level of caution as they would a Test Match, 50 runs from the opening 15 overs often considered an ideal return. This all changed when injury and opportunity saw New Zealand approach their match against South Africa in a different way altogether and change the game for the better.

With regular opener John Wright unable to take his place at the top of the order against the Proteas, New Zealand Captain Martin Crowe decided upon a surprising replacement. Mark Greatbatch, normally a middle order hitter, was chosen to open the batting despite never having batted in the position before. Having been told to ‘up the ante’ by captain Crowe, Greatbatch did just that. Plundering the South African attack for 68 of 60 balls, he and Rod Latham brought the 100 up for the Kiwis in the 15th over.  On the back of Greatbatch’s efforts with the bat, he scored 313 runs for the tournament at an unheard-of strike rate for the time of 88, New Zealand made it all the way to the World Cup Semi-Final. Unfortunately, this is where their fairytale came to an abrupt halt against the eventual winners Pakistan, but their unorthodox approach changed ODIs forever.

It is fair to say that Sri Lanka’s tour of Australia in 1995/96 had been a tumultuous one. As they prepared for the ODI Tri-Series match with Australia, they had seen their Number One bowler Muttiah Muralitharan flown home after having been controversially called for throwing, been overwhelmed 3-0 in the Test Series, and appeared likely to miss the ODI Final too. With an eye to the World Cup later in the year, captain Arjuna Ranatunga devised a plan to resurrect their tour of woe.

On the back of a maiden ODI Century from Ricky Ponting, Australia set Sri Lanka a target of 214 for victory. This was a difficult chase at the time, especially when you consider the 1996 MCG was not roped off as it is these days. As Sri Lanka plotted their chase, Ranatunga approached Wicket-Keeper Romesh Kaluwitharana to advise him of his role in the plan. The diminutive keeper was to open the batting and the move would change the course of cricket history.

Kaluwitharana relished his opportunity and, with the field up, took to the air to punish an Australian bowling attack led by Craig McDermott, Paul Reiffel, and Shane Warne. It was an onslaught so well executed it left Aussie Captain Mark Taylor without an answer to it. In the end, it took a run out to bring the dynamic innings to a close, by which time ‘Little Kalu’ had plundered the much vaunted Australian attack for 77 runs off 75 balls and set Sri Lanka on the course for a much-needed victory.

A few months later at the World Cup, Kaluwitharana and Sanath Jayasuriya combined at the top of the Sri Lankan order for a tournament to remember. Nicknamed Little Dynamite and the Master Blaster respectively, the dynamic duo set the World Cup alight with an attacking display rarely seen before. With strike rates over 130 for the tournament, the deadly one-two punch they both provided at the top of the order was a key plank in Sri Lanka’s undefeated run to World Cup glory.

An inspired batting line-up shuffle in Melbourne had sown the seeds for Sri Lanka’s greatest victory.

When Jason Gillespie took to the crease at Number 3 for Australia against Bangladesh in 2006, he had just one job – to be there when stumps were drawn in 6.4 overs. As a man well acquainted with the role of a night watchman, it didn’t surprise anyone when he finished the day 5 not out and ready to bat again the next day with Phil Jacques.

When Ricky Ponting finally declared an end to the Australian Innings 135 Overs later Gillespie was still there, unbeaten on 201 and still protecting the Australian bats from the Bangladesh attack. Michael Hussey, his partner in an epic 320-run partnership, kept Gillespie focused by informing him of each more illustrious Australian batsman’s highest score he’d just passed. “He [Hussey] knew every Test player and former Test player’s highest score and was ticking them off. Went past Mark Waugh [153], he told me that. Went past Michael Clarke [151], he told me that. Went past Steve Waugh [200] and Boonie [David Boon 200].” Gillespie said after his mammoth stay at the crease.

In a lot of ways, it was one of the most remarkable innings in the history of Test Cricket.  “This is ridiculous,” Gillespie told reporters. “I was just lucky that the shots came off and I had a bit of a laugh all the way. It’s unbelievable. It’s a fairytale really. Hansel and Gretel and Dizzy’s double-hundred, it’s one and the same. Absolute fairytale.”

In a distinguished 71 Test Career, the long-haired quick claimed 259 Test Wickets, but the days in 2006 when he flayed the Bangladesh attack for 201 runs contain his proudest moments. It is also the reason he loves discussing top scores with former teammates Mark Waugh, Steve Waugh, and Michael Hussey. 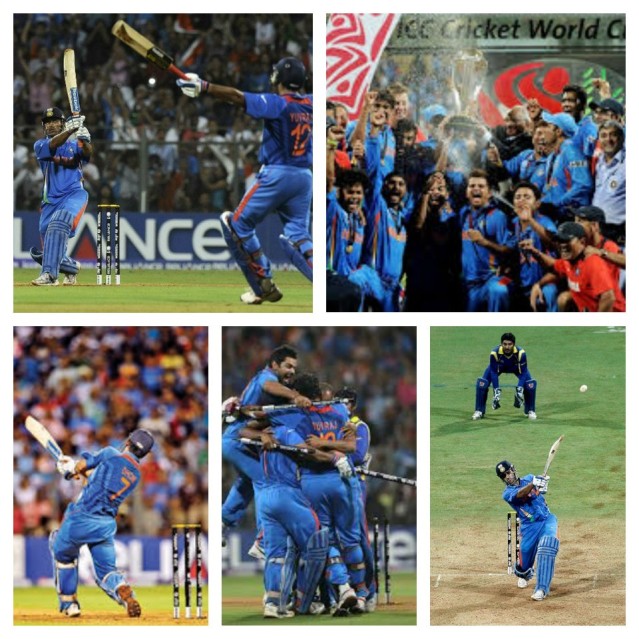 When it came to limited overs cricket, MS Dhoni had a rare gift for timing, an artistry he displayed time and time again in his 300+ short form games for India. One such time stands out above the rest, perhaps the greatest moment of his storied career, the day he won the ODI World Cup for his country.

In pursuit of Sri Lanka’s imposing total of 6/274, India was struggling at 3/114. Rather than send in the in-form Yuvraj Singh, the Captain promoted himself to number five and strode out to the middle of a Wankhede Stadium bursting at the seams. It was a brave move. Where Yuvraj had been one of the stars of the tournament, Dhoni’s form had been far more moderate.

In oppressive conditions Dhoni, in partnership with Gautam Gambhir, went about rescuing the Indian run chase. By the time Gambhir was dismissed their rear-guard action had swung the game India’s way, with the hosts requiring 52 runs from as many balls for victory.

Yuvraj joined Dhoni at the crease, and despite Sri Lanka’s best endeavours, brought the home team within touching distance of victory. One boundary from victory, Dhoni faced Nulan Kulasekera with 11 Balls remaining. Delirium ensued when fittingly, Dhoni walloped Kulasekera’s offering over long on and into the stands for six. The game’s pre-eminent finisher had seen his team home and was rewarded for his courageous move and innings with the game’s ultimate prize.

Then there is the grand-daddy of batting order reshuffles, the day in 1937 when Australian Captain Don Bradman turned his batting order upside down. In the third Ashes Test of the Summer, the two old enemies renewed hostilities at the Melbourne Cricket Ground.  Having won the toss and elected to bat, Australia had reached 6/181 when rain brought an early end to the days play.

Unlike today, in 1937 pitches were left uncovered against the elements and, when play resumed on Day 2, Australia lost their last wickets cheaply on the difficult pitch. England found the conditions equally unplayable as a Morris Sievers spell demolished the English batting lineup. Sensing an opportunity to salvage something from the wreckage English captain Gubby Allen declared the English innings closed 124 runs behind. With the conditions still diabolical, Allen had visions of taking a few Aussie wickets and perhaps even the prized scalp of Bradman himself.

It was this situation that prompted Bradman to invoke his most unorthodox of plans. In scenes much more reminiscent of a junior cricket match than a Test, Australia opened their Second Innings with Bill O’Reilly and Chuck Fleetwood-Smith, numbers 9 & 11 respectively, in the First Innings. When O’Reilly was dismissed before stumps, rather than seeing Bradman stride out at 3, the English were greeted with Frank Ward, Australia’s number 10. Ward and Fleetwood-Smith survived until stumps and their efforts were rewarded with a rest day.

A day without play and better weather helped improve the pitch conditions for Day 3. By the time Bradman came in at number seven with Australia 5/97, batting conditions were perfect. In partnership with Jack Fingleton, Bradman took the previously in the balance Test out of reach for England. The pair put on a record 346 for the sixth wicket, and by the time Bradman was dismissed for 270, the match was all but won.

Having entered the match 2-0 down in the series and with his captaincy in question, Bradman had produced a masterful tactical display to silence his critics. In the end, the greatest ever batting reshuffle in cricket history was rewarded with a 356 run victory, and ultimately, the Ashes.

It is to this maverick spirit of Crowe, Ranatunga, Dhoni and Bradman who decided to look at the game from a different angle, that the Pinch Hitters is trying to capture. Please join us on the journey from Wednesday morning, and get your weekly dose of sport hard and fast, when Episode 1 is released wherever good podcasts are available.