St Kilda’s round two defeat at the hands of West Coast in Subiaco will hurt the players and fans for some time to come. A 19-point defeat is a long way from the 103 and 95 hidings dished out on their last two trips west but that will be little solace to a team that let a game they dominated out of their grasp. The last quarter was like willing on a peripheral character of a horror movie in their efforts to avoid the grasps of the film’s villain. The slow drawn out nature of the chase making it all the more painful when it reached its inevitably grisly conclusion. 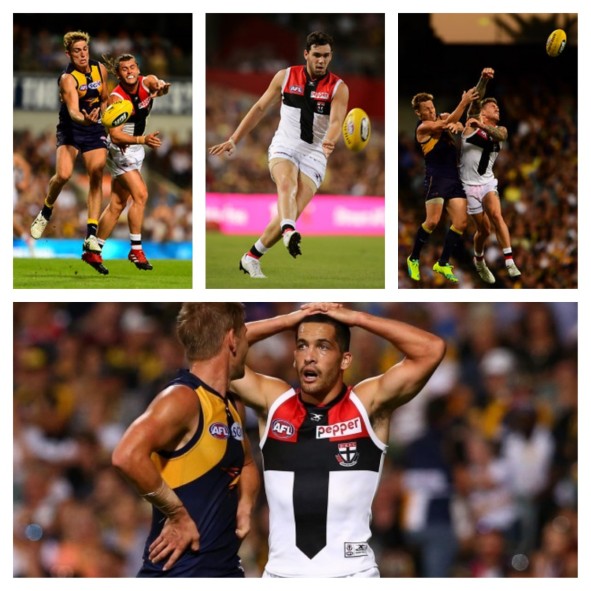 It was a steamy April evening, the mercury hovering around 30 degrees, that confronted both teams when both ruckmen contested the opening bounce. From the moment Tom Hickey followed up his opening tap to get the ball out to Sam Gilbert, the Saints hunted the ball with ferocious intent. It wasn’t just pressure at the contest, ahead and behind the ball, the Saints structures were set perfectly to amplify the harassment felt by the Eagles.

Embarrassed by Melbourne in round one, Hickey and the midfield brigade came to life against the Eagles. Their work around the clearance meant the Saints were able to camp in their forward half of the ground. Spreading the load evenly upfront, when Mav Weller out-marked four Eagles and kicked truly, the Saints had their sixth individual goal scorer and had built a 25-point lead over their more fancied but shell shocked opponent. Despite this dominance, too often they had wasted their opportunities to hurt West Coast on the scoreboard. As is often the case in these situations, while the Saints were wasteful in front of the big sticks, West Coast couldn’t miss and took full toll of their own limited chances. It meant that at quarter time the Saints had scored 13 times to four but instead of having a substantial margin, their lead was a meagre 19-points.

It was just St Kilda’s profligacy that limited the quarter time damage. Somewhat unbelievably, despite the one-way traffic St Kilda’s way, West Coast did not concede a single free kick in the opening term. While free kicks are designed as a penalty for rule infringement and not to be equally distributed, a team not infringing once in a quarter is highly improbable without umpire error. The inconceivability of the performance grew when the free kick count was 13-2 at the half and 23-8 at game’s end. Coach Alan Richardson was guarded but pointed when asked in his post-match presser, “I thought the 23 against — we were a bit sloppy,” Richardson said. “But I reckon early, I would have thought there was a bit of a chance, when we tackled and dispossessed, probably (we should) get a free kick.” Recognising the difficulty of adjudicating in the parochial confines of Subiaco, he suggested he was unsure whether the fans noise played a part in the ‘home town adjudications’[i] before surmising “But it did look like we were a little bit unlucky.”

Lucky, unlucky or something else in between, St Kilda clung tenaciously to their lead as the quality of their opponents slowly began to tell in the contest. Seb Ross, Luke Dunstan and Jack Steven, so prominent in the first half, saw their influence lessen as West Coast’s vaunted mid-field willed their team back into the contest. With Shuey, Gaff and Priddis getting the advantage over their willing but wilting opponents, West Coast’s forward line bared its imposing fangs.

Coleman Medallist Josh Kennedy was well kept by Nathan Brown, who all but blanketed him out of the contest in the opening three quarters. Unfortunately for Brown and the Saints, the last quarter was enough for the bearded spearhead to influence the result. The Saints lead that they had held from the opening minutes of the contest was surrendered with barely 6 minutes remaining on the back of 3 last term Kennedy majors. In the end a spirited performance was not enough to hold at bay a team better able to take their chances when they presented themselves.

There was much for the Saints to take away from their four quarters in the Western Australia heat. Ultimately though it is a win that got away; brave and bold throughout the contest the Saints were unable to stand up when the heat was on. Holding a two-goal lead towards the midway point of the last quarter they just needed to find a way to win. Yet as their opponent was full of running and pressure, St Kilda seemed bereft of the necessary ideas or energy required to do anything other than hope that West Coast fell short. Ultimately it is this inability that is the bitterest of the pills to swallow from another futile trip across the Nullabour.

[i] ‘home town adjudications’ are the author’s emotive description, not Alan Richardson’s.