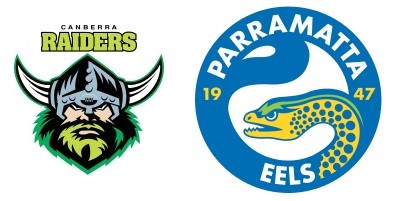 The Green Machine surged back into 3rd place on the NRL ladder off the back of a strong win over the 1st placed Storm, casting aside the naysayers like a well-placed BJ Leilua fend to the face. The win has come at a cost, with star rake Josh Hodgson sidelined for round 24 after pleading no contest to his dangerous tackle on Jesse Bromwich (the upside of which is that Hodgson will carry no points into the finals – we’ll just completely ignore the cheap shot that Bromwich put on Leilua though). So lack of Hodgson aside, the Raiders are well placed this weekend to continue their rampant form on the road to September.

That is not to say that the Eels will be an easy opposition. The Blue ‘n’ Golds have suffered the year from hell, and despite this they still put in the hard yards every match. They managed to go toe to toe with Brisbane before the Broncos rediscovered their pre-Origin form last week, and still offer danger for three teams including the Raiders. Clint Gutherson has handled his sudden shift to five-eighth with a good degree of ability, and youngster Bevan French is proving a handful on the wing.

The Raiders have a good chance here to bag another two points, and if the Sharks stumble again, the Raiders could inch somewhat closer to the dream of actually hosting a final, in, well, Canberra! (Screw you NRL/Sydney – I’ll write that piece later this week). They can’t afford to think of the Eels as done and dusted though – there may not be points left, but there’s a whole lot of pride.

Battle of the Big Boppers

The Raiders engine room was devastating on Monday night, racking up huge amounts of territory while also repelling constant attacks on their line. Workhorse Luke Bateman was instrumental in his 58 minutes played, carting the ball up for 165 metres whilst making 29 effective tackles. Whitehead showed why he was worth the contract extension, his bust in the opening set giving Leilua the launch pad to set up his try via Austin. Papalii remains at peak form, and thoroughly deserves a Kangaroo jersey next time they’re handed out.

In fact, every forward deserves kudos for Monday night – a proper team-based 80 minutes. They’ll take on an Eels pack with nothing to lose, boasting the likes of Scott, Terepo, Moeroa, Wicks, Edwards, Gower, Alvaro and Mannah. On paper they may seem like a stereotypical pack, no huge stars, but on the field they can be relentless, especially if the Raiders forwards give them room to move. Junior Paulo can no doubt expect some traffic from his former team mates on Sunday afternoon.

With Hodgson out it’s now up to Austin, Sezer, Baptiste and Clydsdale to demonstrate that they have the nous and vision to steer the Viking war-ship for a full 80. Austin proved he’s still got great support skills in the opening try break, but it’s really going to have be Sezer who does the heavy lifting when it comes to organising the forwards and coordinating the set plays. Baptiste, too, will have to find a harmonious balance between dummy half sprints and passing. We’re still yet to see much of what Clydsdale has to offer, so it’ll be interesting to see where Ricky injects him into the game.

Jeff Robson has proved a deft signing for the Eels in the backend of 2016. While he does on occasion show signs of age (getting belted in tackles due to telegraphing passes) he still has enough passing shape and short kicking skill to efficiently steer the Eels inside the opposition’s 20. Gutherson is still acclimating to his role at #6, but I genuinely believe the Eels should focus on keeping him there next year rather than returning him to the wing.

Put your Back(s) into it

Offensively, with the exception of the barnstorming BJ, the Raiders backline were quiet on Monday night. This is ok because THEY WERE DISPLAYING AWESOME FRINGE DEFENCE AND REPELLING THE MELBOURNE STORM! In games earlier this year the likes of Rapana, Croker, Interchangeable Lee and Leilua were making dubious choices such as coming too far in or sliding on the line. Those days are now over, with fringe Raiders marking up, staying out and moving forward as a cohesive unit. Croker’s tackle on Cheyse Blair was a proper try-saver.

The Eels welcome back Semi Radradra, but it’ll be the performances of Bevan French, Jennings and Gordon that will be key for the Parramatta side.

Stuart must be cheering on the inside, but is managing a reasonably calm exterior, which is key to guiding his men forward over the next few weeks.

Brad Arthur has done the best he can, and rightly deserves a sane and functioning club in 2017.

The Raiders are now clearly on fire, and it would take a monster effort from the Eels to derail the Green Machine as it rolls into September station.