There’s a bit of a story going around that Laurie Daley’s selection approach for the current State of Origin series. Daley has stuck with players like Brett Morris, Dylan Walker, Robbie Farah and Greg Bird despite questions being asked by many about their worthiness for their position. Farah and Walker in particular standout as players either well past or not yet capable of playing Origin.

Daley likes to pick and stick. It’s the way Queensland have done it since 1980, ignoring club form.

It makes sense at a superficial level. In the high-octane competition that is Origin, you want people who believe in the cause. And replicating the people across from you who have dominated recent Origin history (does a decade still count as recent?) may not just be the best form of flattery, but also a necessary step to rectifying the balance.

There’s only one problem.

See the thing is, Queensland have only really been loyal when there hasn’t been an option. Not blessed with the depth available to the Blues selectors, the Queensland selectors have often been forced to stick with people who may not otherwise have found themselves in a representative side. Carl Webb and Neville Costigan played Origin despite their fitness regime appearing to be remarkably similar to mine (here’s a hint – it involves sitting and booze).  It’s how Adam Mogg, Clinton Schifcoske and Josh Hannay all played multiple origin games despite not being much more than very good first graders.

My favourite example of this is the shortened Origin career of Scott Prince. An excellent halfback in his time, Prince was only the first choice halfback for Queensland in the 2004 series. After that, he didn’t play Origin outside 2008, when an injury to Darren Lockyer forced a reshuffle in the halves. Even then Queensland played Karmichael Hunt in the halves in the first game rather than bring back Prince. 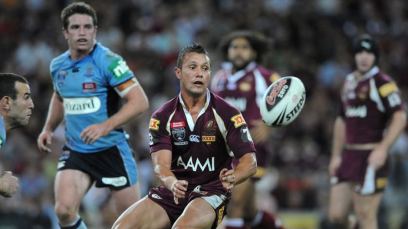 So what happened to Prince? Jonathon Thurston happened. Thurston played his first game for Queensland in 2005 and has been a fixture since. He was picked because the selectors believed he was better than Prince.

So the equations are simple.

And so how is this important to New South Wales? Well for some reason Daley has put ‘loyalty’ ahead of picking the best players for his side. Now I’m not talking about form – players can time purple patches of form perfectly and find themselves picked for a level they simply aren’t capable of, or perhaps ready for. So I’m not even suggesting he needs to go and pick a BJ Leilua or his like.

However, Daley has been caught up in the second half of the equation. Rather than picking the best players available to him, he’s stuck with a different equation:

Good players + loyalty = not quite as good outcome

Robbie Farah is not the best hooker available to Daley. Michael Ennis is. Farrah is not even the form hooker. Ennis is. Farah is there because of loyalty. This led to not-as-good-outcomes like the numerous occasions when he squandered the good field position of the Blues with sideways forays in game one of this series. Greg Bird is good for some physicality, but offers neither the work-rate or power of Wade Graham who’s debut should have occurred twelve months ago, nor the ball-playing skill of Bryce Cartwright. Jack Bird, James Tedesco and BJ Leilua are three of the more exciting talents in rugby league, but none have been in Daley’s first consideration for his backline. Daley has instead been loyal to substandard players either out of form or past their best. It doesn’t appear to be the best equation to win a series.

2 thoughts on “The Myth of Queensland Loyalty”