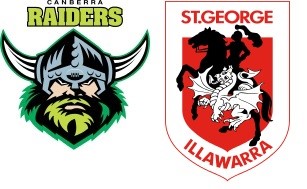 One of Rugby League’s most lopsided rivalries reignites this weekend when the Dragons travel to Canberra to take on the Raiders. Despite finally breaking the long-time hoodoo last year at the same venue, the Dragons will be starting from scratch after an average start to the year. They were mauled by a reborn Tigers outfit on Monday night, and now must endure a five day turnaround to the Raiders on Saturday. The Raiders have had an extra day to regather themselves and sharpen the battle axes. Both sides are without their starting fullbacks, giving Rapana and Mata’utia a chance to showcase their wares.

Trent Merrin: It’s Merrin’s last year at the Dragons, but with an unknown future he needs to put in big performances to raise his value with potential employers. The seasoned Origin performer is an excellent bench rotation, and he’ll need to be more diamond than coal to get the Dragons going forward.

George Rose: The immovable object meets the unstoppable force when Rose and Shannon Boyd go toe to toe. Both will need to be at their wrecking ball best to tire out opposition defenders and create gaps around the ruck.

Jason Nightingale: Look, I put the captain in because both of the halves are ridiculously undercooked and not worth mentioning. The old adage “when you want something done right, do it yourself” springs to mind here, with Nightingale ultimately responsible for the on field morale.

Blake Austin: I didn’t get to see Austin’s performance (F1 innit?) but from what I hear he was pretty awesome, and extremely threatening. 127 metres and 2 line breaks garnered Austin 55 fantasy points, and if he can tighten up his defence (3 missed tackles) he’ll be rad again.

Shannon Boyd: Both Boyd and Rose have been named in the starting 13, which indicates that both coaches want to tire the defence early on. Given that Boyd fell on a guy and broke him last year this shouldn’t be too much of a challenge. He needs to fire up and take it to Rose the way Papa dished it out to Gallen that time.

Sisa Waqa: With Wighton out and Rapana at #1 it may well fall on Waqa to provide much of the spark in the backline. His athleticism is superb, but it’s his experience and calming presence for the younger backs that is of true value. Can combine with Cornish for some straight crazy plays.

The Raiders are already favourites with the bookies, given that they were good bar the excessive errors in their game against the Warriors. The Dragons were even bigger fumblers against the Tigers, and given their atrocious history in Canberra it’s easy to see why the odds are swinging against them. But, as always, there is a catch, and that catch is Josh McCrone. I know it’s not ok to actually hate someone for just trying to do their job, and that it’s not McCrone’s fault he keeps getting picked, it’s just that every time he comes on the Raiders revert to the team from 2014, which is something no one wants. I actually start feeling queasy when I realise that Hodgson is no longer on the turf. McCrone is unto the Raiders what Shane Watson is unto the Australian Test team: completely unnecessary.

The Raiders restart the hoodoo and continue to haunt the Dragons for the next decade or more – McCrone attempts a field goal only to have it ricochet back and knock him out, sparing us all in round 4 at least.