It is fair to say that The Sportress have been unabashed in our support and enthusiasm for the inaugural AFL Women’s (AFLW) competition. The first two weeks of the season have illustrated that we are far from lone rangers in this regard.

Lockout crowds and monster television audiences have suggested that we are at the beginning of something very special. Something well and truly reinforced by the sight of the Carlton men’s team providing a guard of honour to their women counterparts when they took the field to take on GWS on Saturday. 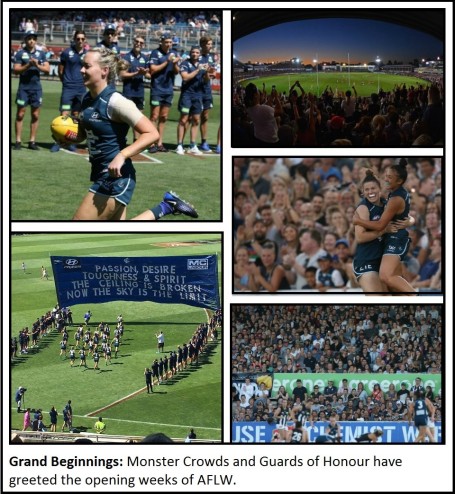 While it is understandable that AFLW may not interest every person on the planet, some of the opposition voiced in different forums has been highly disproportionate. Despite the very sensible words of Mark Twain, who cautions a person to never argue with an idiot because onlookers may not be able to tell the difference, I will take the time to answer some of the more often shared thoughts of AFLW detractors.

What crowds will they get when they charge entry?

The AFLW opener between Collingwood and Carlton at Ikon Park attracted nearly a million-people watching at home, over 24,000 people in attendance at Ikon Park, and required AFL CEO Gillon McLachlan to apologise to the thousands more outside who were unable to gain entry. On most levels of appraisal this represented a feel-good story and, at the very least, an inherent interest in the competition.

For some though, the fact that entry to this, and all AFLW matches, somehow invalidates the show of support. A bit like those who smugly point to the existence of monkeys as the ultimate discrediting of Darwin’s Theory of Evolution, these people have missed the point.

Whether the match would have drawn the same size crowd if an entrance fee was charged is a red herring. There are plenty of free events that would not cause 1000’s of people to be locked out of a packed Ikon Park. In fact, discounting Olympic and Commonwealth Games, the crowd is the largest to attend a stand-alone women’s sporting fixture in Australia. This is something to be celebrated, not questioned. It shows there is an interest, it is now up to the AFL to ensure that they continue to engage with their potential fan base. 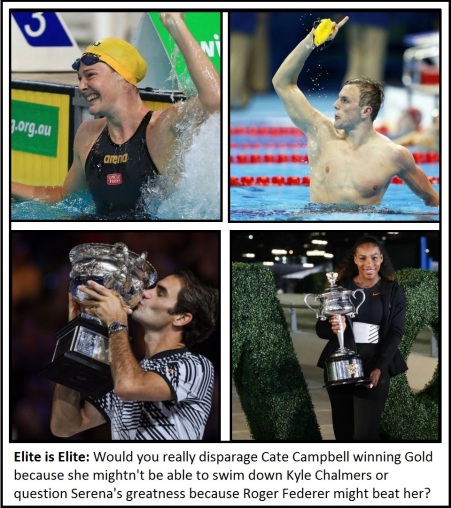 Beyond the fact that this is a bit like refusing to watch Cate Campbell swim for gold because she couldn’t beat Kyle Chalmers, or refusing to acknowledge Serena Williams’ greatness because she mightn’t beat Roger Federer, what did you actually expect?

The men’s AFL competition has been in existence for over a century and fully professional for decades. Pathways for elite male footballers have been paved with gold for years and talent has been identified and nurtured for many a year. For many of the players competing in the inaugural women’s competition they have been professional footballers for mere months, and didn’t have teenage competitions to play in at all let alone talent identification programs to help them hone their craft.

The product on show each winter is a result of years and years of preparation and refinement, the product you are watching this summer is two rounds old. The football on offer in years to come will be light years ahead of what is on show now, but this can only happen as a result of the existence of a national competition for women players to aspire to.

Rather than bemoan a higher percentage of errant passes, how about you instead marvel at the intensity and vigour on show. This attack on the ball and opposition player is the equal of anything you will see in the men’s game. It takes a different understanding to mine to watch Elise O’Dea or Brittany Bonnici maniacally contest a disputed ball, or Tayla Harris fly, Nick Riewoldt like, and crash packs to claim contested marks, and maintain the view that they don’t deserve their own elite league.

That is media. That is hype. It is not real.

This is actually the view of Andy Stewart, the coach of WNBL team Perth Lynx. Admittedly it was after his team had played in front of a crowd of 813. Despite the presence of many of the world’s best basketballers, the WNBL doesn’t even have a broadcast arrangement in place, which might explain the envy in Stewart’s comments but it doesn’t excuse it. 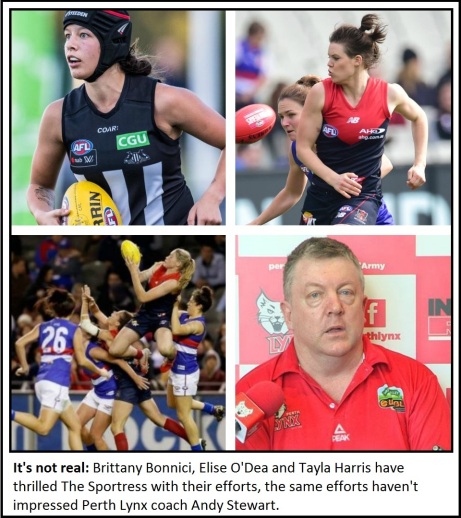 Rather than try and tear down the AFLW, Stewart and other leaders in Women’s Sport in this country should be trying to take advantage of the free kick it is giving women’s sport. Rather than death ride it, they should be hoping it succeeds. Do you think media barons, from Brisbane to Perth and everywhere else in between, would be more likely to provide greater coverage to women’s sport in this country if the most publicised competition fell over or if it succeeds?

I understand that the sports are in competition with one and other, but this pettiness is short sighted. Rather than blindly try and wound AFLW in an attempt to keep their percentage of the currently small sliver of pie on offer for women’s sport, they should be watching with glee as the competition helps grow the pie. The more main stream attention that is focused on women’s sport equals greater opportunities for women in sport. If large numbers of people continue to attend and watch women playing Australian Football, the more likely you are to see more main stream attention provided to women competing in other sports.

The other thing I don’t understand about those that are vehemently opposed to women playing footy in February and March is that nobody is forcing them to watch. The remarkable thing about this country is that if you don’t like something you can choose not to watch, read, or listen to it. It is this fact that makes me wonder why anybody would waste their time screaming their opposition to it, surely it is much easier and healthier to put your feet up and watch Grant Denyer host Family Feud* than it is to fill online forums with bile about your displeasure with AFLW??

*Even though I believe it is a suitable punishment for filling online forums with bile about AFLW, it is not compulsory for these people to watch Family Feud if they absolutely don’t want to.