When he joined the Canberra Raiders it was part of an upswing in Raiders fortunes. He came to the Raiders a talented prospect, much like the side was at the time. As he matured, so did the Raiders, and by the time he left he had played an important role in turning that side around. His significance may be lost on those that only remember championship sides, but for us he will be remembered as a critical part in the Raiders resurgence. 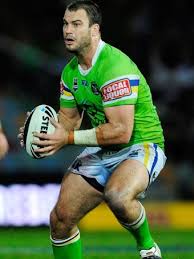 After years of losing talented youth to Sydney clubs,  Shillington seemed like the first player in more than a decade to make the choice to head south on the Federal Highway to join the Raiders. The Raiders had just come off the first Terry Campese winning streak[1] and were at risk of becoming a sexy landing spot for talent.

While the Raiders struggled in 2009, Shillington was excellent from the start. With Scott Logan, Brett White, Dane Tilse and, when healthy, Tom Learoyd-Lahrs, he provided the grunt in the middle of the park, his high ball-carry belying his excellent ability to fall to his stomach in the tackle and ensure quick play in the ruck.[2] He was easily the Raiders’ best over this period, and his Canberra years were the best of his career. He quickly became one of the elite props in the competition, something reflected by his representative record during this period.

Shillington’s selection for the Queensland State of Origin squad in 2009 was indicative of his form with the Raiders. It was the first of 8 Origin games and 14 matches for Australia over the period. In combination with the often excellent form of Campese, he represented a possible pathway to premiership success that hadn’t existed in Canberra since the mid-1990s. I’ve always thought that props were overvalued in a strict ‘efficiency’ sense – the cost of a star prop often outweigh the value they provide on the park. But on the park Shillington managed to be worth every cent he was offered.

And for a time Shillington was the leader of a pack that could compete with the best in the competition on their day.

The arrival of Ricky Stuart as coach for the 2014 season was the beginning of the end for Shillington in Canberra. It was reported at the time that Stuart and Shillington had a poor relationship during their time together at the Sydney Roosters, and Shillington’s push for Andrew Dunneman to be given the head coach job ahead of Stuart was unlikely to help that relationship. This tension was no doubt exacerbated when Shillington called on Stuart to fix the Raiders ailing ‘culture’, something that Shillington had been contributor to – most notably when he blew twice the legal limit at the end of 2009. Shillington no doubt further upset his new coach when he publicly disagreed with Stuart’s assessment that the Raiders didn’t have any marquee players.

All this may have been tolerated if he had kept his week-to-week form displayed prior to Stuart’s arrival. But Shillington had sustained serious injuries throughout his time with Canberra and this only got worse as he aged.

Towards the end of the 2014 season he tore a pectoral muscle and missed the last five rounds of the season. This slowed his start to the 2015 season, and Stuart left him out of the squad for the first two rounds. He broke his thumb in New South Wales Cup and was out another two months. Suddenly, Shannon Boyd, Paul Vaughan and Luke Bateman were preferred. By the time he returned to the top level the Raiders had given him permission to negotiate with other clubs. He then used his limited time in the top grade to headbutt Aaron Woods, becoming the first player in over two years to be sent off in an NRL game.

His Raiders career was all but over.

As he walked out the door Don Furner said he was the best recruit of the last twenty years.

While he left the Raiders more with a whimper, he returned with a bang to Canberra in 2016. This time as a member of the Titans, he dominated the pack he’d been discarded for, racking up 154 metres from just 15 carries in the Titans victory in Canberra.

The game reminded Raiders fans of the importance of Shillington in his stint in Canberra. He brought respectability, competitiveness and elite talent to a pack lacking those characteristics, leaving the Raiders better than he found them.

[1] To be followed in 2010 by the second streak. As always, the sequel wasn’t as good as the original.