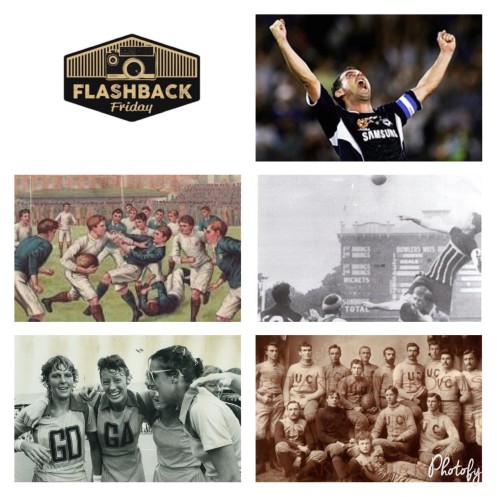 From the competition’s inaugural season until his tearful departure last season, Archie Thompson scored an A-League record 90 goals. It is a record he will soon surrender with fellow Melbourne Victory marksman Besart Berisha drawing level and Shane Smeltz returning to the A-League only one goal behind. This Flashback Friday we honour the A-League first goal scoring machine by taking a look at the 2007 Grand Final. On a magical night at Etihad Stadium, one that Victory fans will never forget, the colourful striker netted 5 goals as his club secured their maiden championship with a 6-0 demolition of Adelaide United.

The previous season, the A-League’s first, had been a much different story for the Melbourne team. The Victory did not live up to their name as they became the competition’s biggest disappointment finishing above only the diabolical New Zealand Knights. Coach Ernie Merrick, under immense pressure, failed to blink. In the off-season he bolstered the squad with a number of shrewd signings seeing the club acquire Brazilian Fred and former Manchester United Youth Team player Grant Brebner. The coach was confident that with the young talented squad already assembled, the returning Thompson from his loan to PSV Eindhoven, and his new signings, he had the building blocks of a successful squad. He couldn’t possibly have imagined how successful. 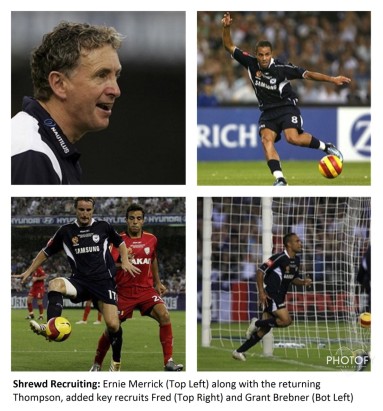 The regular season was a cake walk for Merrick and his men in blue, out of the blocks early the Victory recorded wins in each of their first seven games.

With four rounds to play they had tasted defeat only twice and could turn their eyes towards the finals having already tucked the A-League’s Premiers Plate away in the Trophy Cabinet. After completing their regular season commitments, Melbourne entered their first post season 12 points clear of second placed Adelaide.

As it had seemed destined to all season, the Victory won the right to host the A-League decider at Telstra Dome. They only did so after a 92min winner in the second leg of their Major Semi Final against Adelaide. In the end, it was only a header from journeyman James Robinson that kept the Victory from undoing a whole season’s work in 180 minutes.

When Melbourne and Adelaide walked onto the pitch for the Grand Final they did so in front of an A-League record crowd of 55,436. Thompson entered the game without a goal against Adelaide but this did not dim his confidence in the lead up. In that day’s papers the striker predicted a hat-trick saying “I’m due for one — and I hope it’s on grand final day.”

Even though the A-League was only two seasons old, the Grand Final represented the 9th match-up between Melbourne and Adelaide. While becoming so closely acquainted, the two clubs had developed the fledgling competitions most heated rivalry. The angst between the two teams most famously illustrated earlier that season, when Victory Captain Kevin Muscat and Reds Coach John Kosmina, clashed physically during a regular season game at Telstra Dome. Not that Grand Finals need any more interest but the friction added a tantalizing subtext as the combatants felt each other out in the game’s opening minutes.

After the nail-biting Semi-Final tie it was no surprise that both teams settled into an arm wrestle early with each striving for ascendancy. When United had the first true chance of the match after Nathan Burns forced Victory keeper Michael Theoklitos into a sharp save in the 17th minute, there was no warning of the carnage that the remaining 73 minutes held in store. 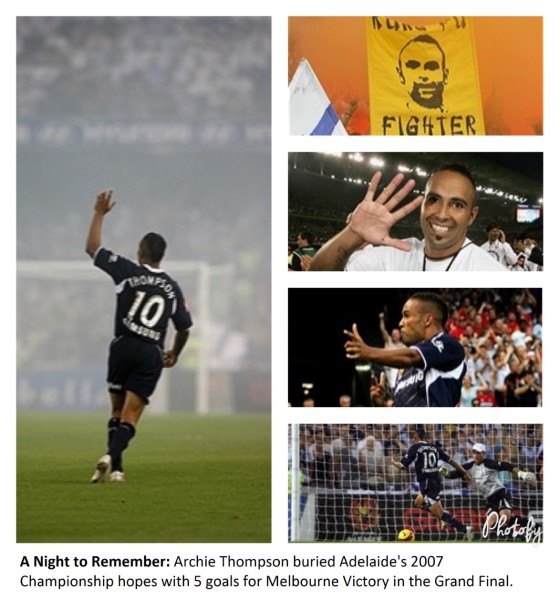 Approaching the 20-minute mark. The deadlock still to be broken.

Maybe this is the chance. FRED. Through.

Ball’s over the line. Mark Shield has signaled a goal and Archie Thompson, the man who’d never scored against Adelaide, puts that statistic right on the big stage.

This is where Melbourne are dangerous. Allsopp running at pace. Fred on the outside.

SENSATIONAL GOAL FOR THE VICTORY! And they’ve doubled their money in the Grand Final.

Brebner’s been caught very late. [referee’s whistle] And ROSS ALOISI, well he’s already been booked and it goes from bad to worse for Adelaide United. They’re 2-0 down and now they’ve lost their captain for a second yellow.

Well he’s fired up, but it’s a silly thing to do for a player of such great experience. There’s John Kosmina, he could be feeling it slipping away as early as the 34th minute.

And maybe that will bring the Championship to Melbourne.

Archie Thompson has a hat trick, he will take the matchball and possibly Melbourne the trophy itself.

This could be a fourth for Archie THOMPSOOOON!

That’s it surely for Melbourne, they’re singing in the rain at the Dome and the trophy is headed for the Victory cabinet.

Well the ball is just glued to his boot. Glued it seems to the back of the net!

FIVE for Archie Thompson and Melbourne.

KRISTIAN SARKIES! That is perhaps the pick of the bunch.

What a way to finish it at Telstra Dome. Brilliant. And it is SIX for the Victory!

With a minute to play in the match Coach Merrick theatrically substituted his match winning striker, allowing the adoring crowd the opportunity to give Thompson the standing ovation he deserved. All that was left now was to celebrate. The party mood within the stadium offered some moments that would have been unimaginable had they not actually happened. The usually staid and emotionless Merrick allowed a smile to cross his face and Kristian Sarkies, upon receiving his Champions Medal from Prime Minister John Howard, planted a kiss upon the hirsute stateman’s head and Howard laughed. 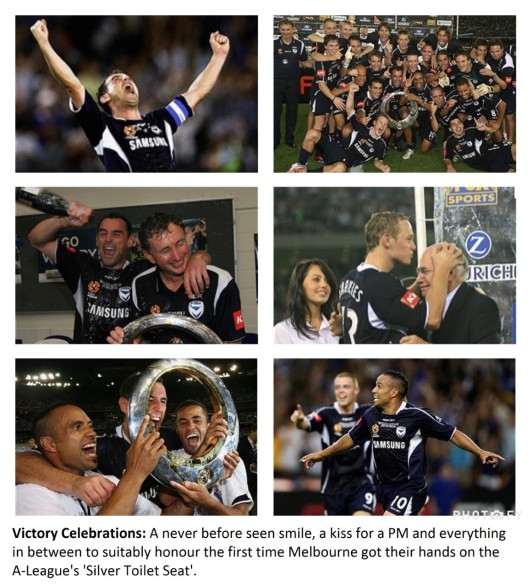 It surprised nobody when Thompson was awarded the Joe Marston Medal, 5 goals is hard to ignore when awarding player of the match honours. It was a performance for the ages and will ensure his name will forever be spoken when Grand Final week comes around.