‘This is supposed to be a brilliant week in Melbourne. Spring is here, the sun warms the city, there’s a buzz in the air, fresh grass clippings smell delicious and all that jazz, but for us ol’ dishlickers it’s like ripping the scab off an old wound that refuses to heal’.[i] – Former Bulldog Adam Cooney describing Preliminary Final Week.

Western Bulldog supporters can lay claim to be amongst the most patient in the AFL. The club’s Premiership and Grand Final droughts are the longest standing in the competition. Since last gracing that last Saturday in September, seven Preliminary Final defeats are the closest they have come to again claiming the ultimate prize. As they have waited and longed, they have watched five new clubs form and test their wares on Grand Final day, four of whom would sip from the Premiership Cup.

It is fair to say the world has changed a little since the then Footscray Football Club last won on Preliminary Final day. When Ted Whitten led his team off the MCG winners that day in 1961, JFK was President of the United States and Robert Menzies was Prime Minister of Australia – one of 15 to serve in the top role in Australia as Bulldog fans have waited for another Grand Final appearance. 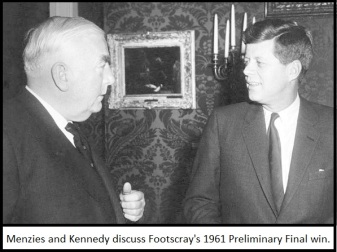 As they prepared for the 1961 Grand Final, they were the only one of the  three teams added to the Victorian Football League in 1925 to have claimed a Premiership. As Bulldogs supporters have waited for their team to again grace the game’s decider, they have watched fellow 1925 expansion clubs experience wildly different levels of success. North Melbourne claiming 4 flags from 7 Grand Finals and Hawthorn 13 flags from 18 Grand Finals.

Although each of the seven Preliminary Final defeats would be painful, for Cooney, the epic finals of 1997 and 2009 stand out.

“From Libba’s goal that wasn’t in ’97, to Aker’s deliberate out of bounds call and Nick Riewoldt’s free kick for a push against Brian Lake right in front of goal in ’09 … in a seven-point loss on a night when goals were so hard to come by (not that I’m still bitter about it), it’s a tale of agony.”i

As the Bulldogs prepare for their Prelim Final clash with Greater Western Sydney, we will take a look at their cursed luck on the games penultimate weekend. Paying close attention to the two highlighted by Cooney – today 1997, tomorrow 2009.

Between 1961 and 1997 Footscray twice climbed the rungs of the ladder to compete for a spot in the Grand Final . In 1985, under a young Mick Malthouse, the Bulldogs finished the home and away season in second position and claimed the club’s first finals victory in 24 years. Preliminary Final day saw them matched against Hawthorn, who were able to hold the Dogs at bay, after a massive last quarter from Leigh Matthews.

Another second place finish in 1992 saw Footscray again return to the finals with high hopes. They recovered from a 10-goal qualifying loss to book a Preliminary Final date by eliminating a Tony Lockett led St Kilda side. Much like their Qualifying Final of two weeks earlier, Geelong were too strong for the Bulldogs, winning comfortably by 64 points.

For the newly renamed Western Bulldogs, 1997 was an extraordinary season. Playing an exhilarating style of football, the young pups, under Terry Wallace, climbed from 15th in 1996 to 3rd at the end of the home and away rounds. A win over Sydney in their Qualifying Final meant they took the field against Adelaide on Preliminary Final day, refreshed from a week’s break and ready to claim a date with Minor Premiers St Kilda in the Grand Final.

At ¾ time the expectation was palpable. 22 points in front, some Bulldog supporters begin to contemplate the rush to Whitten Oval to line up for Grand Final tickets. Wallace passionately urged his team to finish the job and become only the third Bulldogs team to play in a Grand Final.

The two teams wasted chances early as the Bulldogs search for the killer blow. These early blows traded and the margin maintained sees commentators begin to discuss the result as inevitable. Tim Lane on the ABC suggests that the damn wall is about to burst, as Sandy Roberts on Channel 7 openly wondered “what the Dogs could do next week when they take on the St Kilda.”[ii]

Then the most memorable moment from one of the AFL’s most memorable games. Brownlow Medallist and fan favourite Tony Liberatore swooped on a loose ball and quickly shovels it onto his left boot towards goal…. 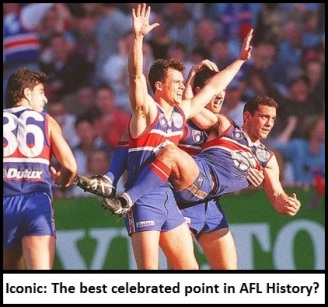 The Bulldogs celebrate immediately. Libba, Brett Montgomery and Paul Hudson converge in the belief the dagger has just been landed. All three, years later, are adamant that their display of joy was no attempt to con the umpire.

“I was very young and very immature but I knew my footy well enough to know where the goal posts are, and I thought it went through,”[iii] Montgomery recalled in 2008

“Everyone says it was through. It looked like it was a goal. Brad Johnson swears it was a goal” iii Liberatore recalls.

“To the eye, I thought it was through by a foot,” Hudson recalls. “Gee, I’d love to have vision behind the goals. I still swear it was a goal.”

“You can see by my excitement, what I thought. I get excited by goals, not points”. iii

Not everyone agrees with the celebrating trio. Rod Jameson, the Crows full-back, tracked the ball and is equally sure it missed. “I think you’ll find I went back and grabbed the footy before the umpire made his decision. I was pretty sure,” Jameson recalls.

“From where I was it looked like it did miss. It was tight, though.” iii

Importantly for Adelaide and their chances, the goal umpire agreed and signaled a behind. The ‘goal’ the Dogs celebrated would have signaled a 28-point lead, with 11 minutes left a likely match winning lead.

“I think that was the nail, yeah,” Jameson agrees. iii

The miss is compounded with Adelaide’s Darren Jarman kicking the term’s first goal. 90 seconds after believing they had secured a 28-point lead, now the Bulldogs led by only 17. Two more quick goals to Nigel Smart and Simon Goodwin and the margin was a meagre four points.

Tim Lane’s call of the dam wall falling were correct, but not the way he imagined. Adelaide were creating opportunities at will. The Bulldogs’ Matthew Croft intercepted the Crows’ 16th forward thrust then, with less than 3 minutes to play, from half-back starts a counter-attack that ends with Scott West missing another chance for the Bulldogs to ice the game.

Bulldogs President David Smorgon, who only half an hour earlier was daring to dream, remarking to Vice-President Ray Baxter ‘Can you believe this – one more solid quarter and all that hard work and planning will end in a Grand Final’, was now unable to remain in his seat, agitatedly and increasingly desperately pacing up and down. He later described the unfolding drama of the last quarter “like watching a fairytale turn into a horror movie.”

While Smorgon paces, the Crows drove forward again, this time the forward thrust found Darren Jarman 35-metres out. The South Australian kicked truly, his third goal wresting the lead for Adelaide with less than two minutes on the clock. Jarman’s influence on the game telling, but his presence in the goal square only came about as coach Malcolm Blight searched for an option in response to a serious knee injury to Coleman Medalist Tony Modra in the first half.

The Bulldogs, now chasing the game, won the resultant centre clearance and kicked long, hoping towards the hot spot at the top of the square. The ball squeezed out the back and Chris Grant and Hudson lead frantic Crows players to the elusive Sherrin. Grant won it two metres out, but pressure from a desperate Tyson Edwards saw only a behind registered.

What happens next, when compared to today, is almost unbelievable. 1.21 left on the clock, Jameson collected the ball for the kick in and quickly drove the ball back into play and to a contest 60 metres out. With the clock running down, there was still time for one last Bulldog attack. The ball spilled out to Scott West who drove the ball inside 50 but Edwards, as he was only moments earlier when Grant looked to steal the lead, was in the right place and marked West’s hopeful punt. A handpass to Jameson the final act as the siren sounded and drew to an end one of the greatest Preliminary Finals. 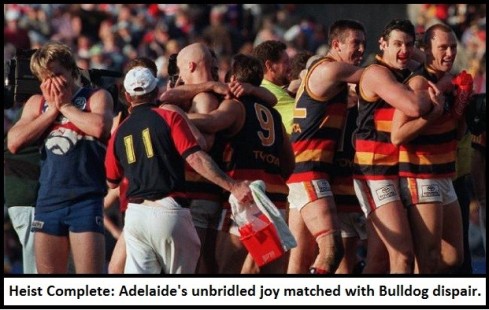 As the Adelaide players celebrated, the television cameras survey the scene finally settling upon a distraught Rohan Smith. The Bulldog winger on all fours angrily pounding the MCG turf with his fist, a perfect encapsulation of the feelings of his team about an opportunity lost. 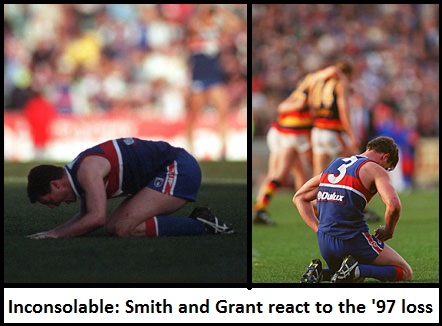 Tomorrow we take a look back at the controversial, gripping and hard fought slog that was the 2009 Preliminary Final.